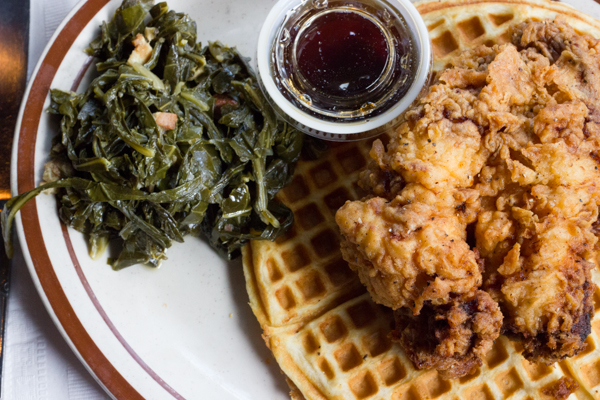 by Vik Rangraj
Seattle is really hard to break into, both socially and learning where new food is popping up. Dishcrawls, which introduce you new new places in your neighborhood, try to fix that. Recently they hosted a Neighborfood tour across Capitol Hill, and EditorNW Jessica and I went out to explore. Neighborfood was different than the usual... Read More

Seattle is really hard to break into, both socially and learning where new food is popping up. Dishcrawls, which introduce you new new places in your neighborhood, try to fix that. Recently they hosted a Neighborfood tour across Capitol Hill, and EditorNW Jessica and I went out to explore. 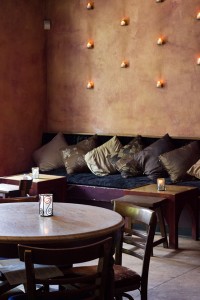 Neighborfood was different than the usual Dishcrawl experience: it was a self-guided food walking tour, where your map was also your passport to dining. Essentially, it’s a pub crawl, but for food. While much of the food was excellent, the lack of forethought and attention to detail stopped it from being a laid back experience with new friends.

Much of the food was quite excellent. Manhattan’s offering stood out as a spectacular example of good “southern boy” eating: cheesy grits and shrimp etouffee, ain’t too much better ‘n that. I guarantee it. The meat sprinkle on top was a bit unnecessary, but if your biggest complaint about a dish is a perfectly cooked piece of delicious, rich, fatty pork belly, you’re officially in first world problems mode. Similarly, I really shouldn’t need to tell anyone this by now, but Marination Station was wonderful. In case you’ve been living under a rock, the Marination food truck and associated restaurants are fantastic. The food is Korean-Hawaiian-Mexican fusion, truly worthy of the previous hyperbole. 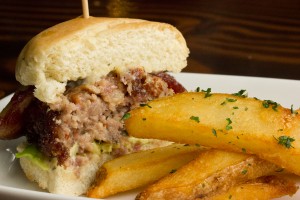 Unfortunately, the rest of the food ranged anywhere from decent to borderline inedible. The chicken pinchos at the Capitol Club were the worst offender of the lot. What I hoped for was something with a spicy carribean vibe. What I got was a dry flavorless chicken strip on a stick, accompanied by some yogurt. I’m pretty sure the yogurt was supposed to be tzaziki, but I’m not sure the faint hints of cucumber weren’t the product of wishful thinking. The biggest problem with the dish, however, was that this was our first impression of Neighborhood.  Dishcrawl may have tried to put its best foot forward, but unfortunately stepped straight into manure.

Another problem was the huge variation in portions. 95 Slide served a full chicken and waffle entrée with collard greens, and diners who finished it all could have been too full to keep exploring. Others had small bites, like Sam’s Tavern and their epic 50/50 slider which was HALF BACON. (It also helped that they had wonderful fries, a moose, great music and the most epic bloody mary garnish in creation.) Still, you never knew how large the next part of the meal was going to be, making planning challenging. 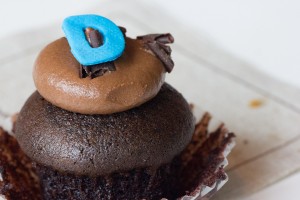 I think my biggest gripe with the event is the missed opportunity for socialization. Dishcrawl seems like the perfect opportunity for newcomers to break into Seattle’s insular social scene, but there were no icebreakers or even ways to easily chat with others following the route. Sharing food is easily one of the best ways to get to know another person, and you would hope that an event called Neighborfood would provide an opportunity for people to meet their neighbors.

The tragic thing is that all of these problems are fixable. Starting the ‘Crawl further uphill would at least have allowed people to choose the order they wanted to visit restaurants, instead of providing diners with exactly one optimal route. Similarly, including Capitol Hill food staples such as Quinn’s, Skillet, Molly Moon’s or Old School Frozen Custard would have given customers a much better idea of what their “Neighborfood” is like, and how good it truly can be.

Vik Rangraj
Vikram is 'The New Guy' at Crave Local. He loves nightlife, cocktails, sports, tailgating and meat! He has a nice hat, in which he can be frequently spotted while exploring Seattle's drink culture.   If you have an upcoming event, grand opening, great product, contact us
View All Posts by Author
Visit Author Website
Coffee Crusted Pork Tenderloin Recipe
Previous Post
Summer Cocktail Recipe: The KP Cobbler