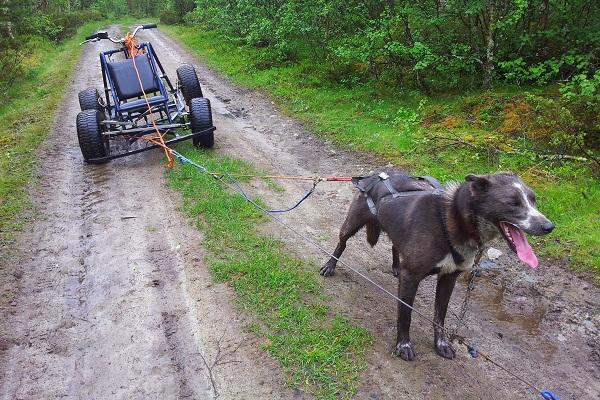 by Jessica Tupper
Ever wanted to be in the Iditarod, and don’t want to move to Alaska? Then you need to go to Alaskan Husky Tours in Røros and trek out with our host, Ketil Reitan. Following Ketil on a cart was one of the most exhilarating moments of the year – even though I was going very,... Read More 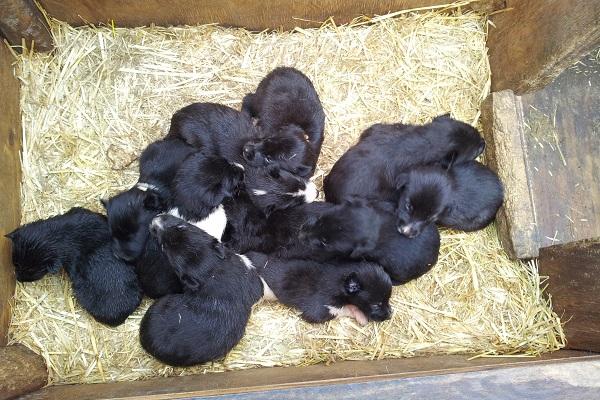 Ever wanted to be in the Iditarod, and don’t want to move to Alaska? Then you need to go to Alaskan Husky Tours in Røros and trek out with our host, Ketil Reitan. Following Ketil on a cart was one of the most exhilarating moments of the year – even though I was going very, very slowly by dog sledding standards. 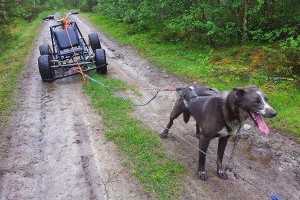 Ketil is a master dogsledder, with experience working with National Geographic and other groups, who now leads his pack of eager, friendly sled dogs for local ecotourism. His company is one of the few in the entire world where a novice can lead a sled team for 1200 NOK ($195 USD).

Since it was warm and wet out, we were led to a room to pick up raingear, boots, socks, and gloves. (In the winter, snow gear is available.) My recommendation is to wear all of it, even the socks, as you might hit a puddle or snowpack and get soaked. When you’re dressed, you grab a helmet and you’ll feel ready to hit the trails.

Before the ride, you have to meet the puppies. Ketil breeds sled dogs both for his team and for sale, and one of the best parts of visiting is handling all of them, since they need to get used to people. When we visited he had twenty two puppies, from eleven three week old black bundles of fluff, to rambunctious, excited six month olds. They’re very sweet, and love the attention. Had Ketil not pulled us out to go on our ride, we would have stayed all day. After just ten minutes with them I was smitten and desperate to buy them all their own Pet tags and give them all names. All twenty two of them. Maybe next time… 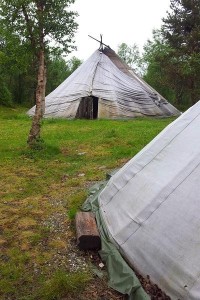 We trekked out before the snow hit, so we went sledding in carts built for eating trails. Ketil taught us how to attach the harnesses, then pointed out the dogs for our teams and had us work together to clip in each animal. Then, we were off.

We all took turns running sleds, with my cart running four dogs to Ketil’s six. I took turns between being amazed at how fast we were going and scared that I could pull this off, but the dogs knew what they were doing. The carts are fairly agile, and it was so much fun to zoom through the countryside, the dogs running at full speed.

At the end of trekking everywhere from hills to fields, Ketil brought us back to camp, where they had a fire roaring in the lavvo, a traditional tent similar to a tipi. And lunch from the Røros Hotel. Ketil brought along our special guests, two of the three week old pups, to sit with us.

Inside the crazy warm space of the lavvo was a fire, a kettle hanging over the coals, and reindeer skin-lined chairs covering the benches along the edges. With our puppies sitting alongside, it was a soothing end to an adrenaline rush of a day.

Jessica Tupper
Jessica Tupper is busy, and likes it that way. As the Food Ninja, she likes to figure out new ways to explore the Seattle food scene - from eating at all the Tom Douglas restaurants in one day to epic sundaes using Bluebird and Molly Moon ice creams. Silly hats may or may not be involved. If you have an upcoming event, grand opening, great product, contact us
View All Posts by Author
How To Choose the Best Glass To Serve Champagne
Previous Post
Hair of the Dog – Bloody Mary Recipes From Across the USA
Next Post
You May Also Like