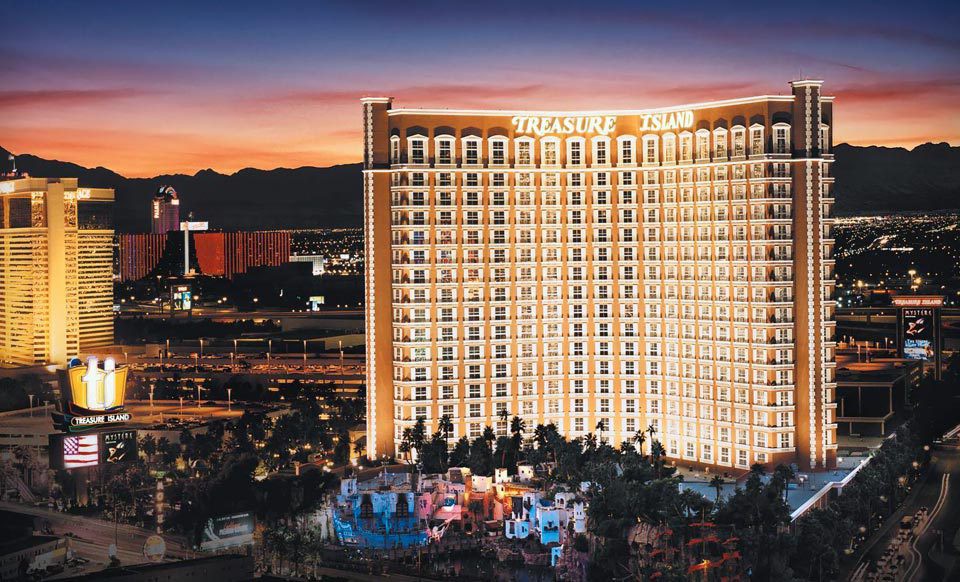 More than 100,000 couples tie the knot in Las Vegas every year, and far more choose to honeymoon there. Treasure Island Hotel & Casino makes a lavish spot for celebrating either occasion—or any other event, for that matter. The AAA Four Diamond Award–winning hotel has just about everything you could ask for, and some things you probably hadn’t thought of. There are 10 restaurants, five bars, a casino, elegant wedding chapels, and a theater that’s home to Sin City’s original Cirque du Soleil show, Mystère. A cast of 72 dancers, aerial acrobats, and clowns wows crowds at the critically acclaimed circus spectacle, which brought Vegas stage shows to a whole new level when it first appeared in 1993.

At Treasure Island’s casino, you’ll find table games, slot machines, and daily poker tournaments. Apply your winnings toward a porterhouse at Phil’s Italian Steak House, or spring for a Vietnamese dinner at Pho—just two options among the hotel’s wealth of restaurants and bars.

Las Vegas: The Strip Past and Present

Mentioning Las Vegas usually conjures up images of spinning roulette wheels and stone-faced poker players. If that’s what you’re looking for, you’ll want to make a beeline for the casinos lining the neon-lit Strip. But for lower-stakes gambling in a throwback Vegas atmosphere, head downtown to Fremont Street. Vintage signs and showgirls crowned with headdresses recall the days of Sinatra and Martin, but this Glitter Gulch burns much brighter today than it did in the Rat Pack era: beginning at dusk, a canopy of more than 12 million LED lights erupts in a psychedelic light and music show every hour.

Educational attractions have never been Sin City’s strong suit, but the Mob Museum boasts a winning formula: bank robberies, prostitution, and money laundering. Exhibits profile legendary mafiosos from Capone to Gotti, and mob artifacts include the bloodstained, bullet-pocked brick wall from the St. Valentine’s Day Massacre. Within the former federal courthouse, you can fire a Tommy gun simulator, participate in a police lineup, or enter witness protection for the rest of your life.