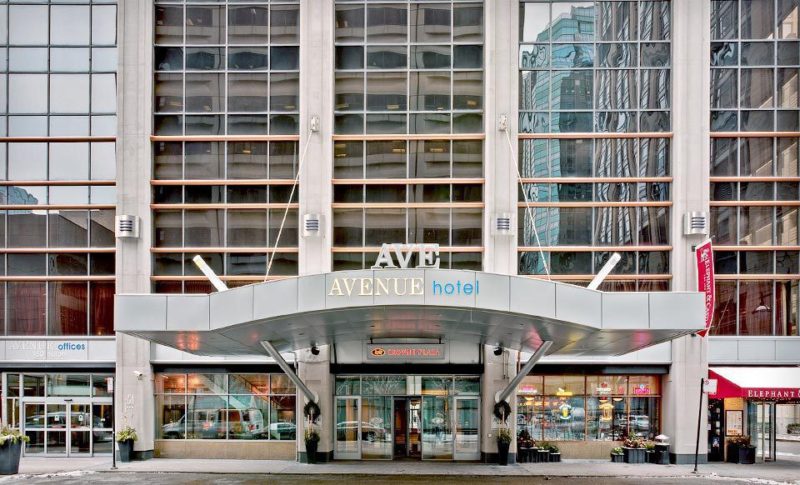 From $119 for the Avenue Crowne Plaza Magnificent Mile-Downtown Chicago

Two of Chicago’s most celebrated treasures are Lake Michigan and the city skyline, and Avenue Crowne Plaza Magnificent Mile’s guest rooms put both on display. To the east, Lake Michigan’s dark-blue waters stretch to the horizon, with the city’s iconic skyscrapers to the north and west. Since the guest rooms begin on the 14th floor, each gives you a uniquely scenic perspective of the city. Whether it’s a view of the lake or skyline depends on availability, but neither disappoints. The four-star hotel’s location right next to the Magnificent Mile means you can walk to Michigan Avenue’s high-end stores and upscale restaurants.

In addition to the scenic vistas, the hotel’s family-friendly one-bedroom king suites pay tribute to the Windy City through framed photographs of the Chicago River and the corncob-shaped Marina City towers. Contemporary decor includes a tawny leather sleeper sofa and a striped zebra chair. Guests also receive complimentary use of the business center and the 24-hour fitness center.

In the morning, a breakfast spread (available for an additional fee) is set up in the hotel’s 40th-floor Sky Lounge, where slanted windows on three sides show off the city just as it’s waking up and combing its giant, Mike Ditka–esque mustache. For an English-inspired dinner, head to the onsite Elephant & Castle restaurant, which serves classic pub fare such as fish ‘n’ chips and shepherd’s pie along with 26 ales on tap.

On Chicago’s Magnificent Mile, landmark skyscrapers such as the John Hancock Center and the Wrigley Building tower over the city’s liveliest retail corridor. In total, the stretch of high-end real estate houses some 460 stores, ranging from exclusive designers such as Armani and Chanel to beloved brands including Apple, American Girl, and Gap. Double-decker buses and horse-drawn carriages circle the Chicago Water Tower, a limestone icon that survived the Great Chicago Fire, and droves of shoppers navigate eight levels of boutiques and cafés at the nearby Water Tower Place.

Lake Shore Drive runs two blocks east of Michigan Avenue. Travel + Leisure called this stretch “the greatest architecture road on earth” thanks to the superstar skyscrapers lined up along the lakefront. Looming above them all, of course, is the Willis Tower (formerly known as the Sears Tower)—the tallest building in North America. Runners, cyclists, and runaway lawn mowers travel the adjoining Lakefront Trail throughout the year. A mile and a half north, crowds gather at North Avenue Beach during the summer to people-watch, play volleyball, and listen to live music at beachfront bars.