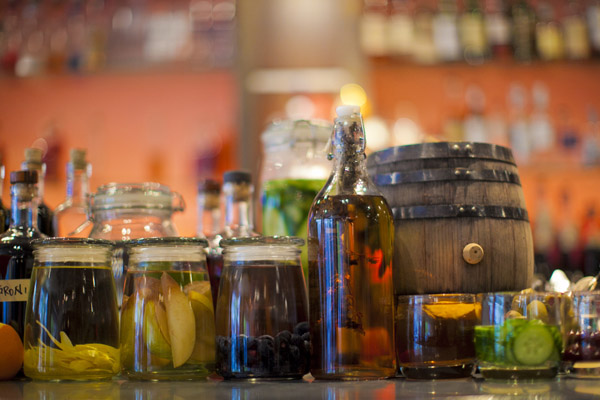 BOKA and Hotel 1000 Reveal Some Tricks of the Trade: Mi-Suk Ahn and the Art of Infusion

by Kiri Callaghan
Hotel 1000 gave Seattle a night to remember on December 10th and with BOKA Bar’s Chief Mixologist, Mi-Suk Ahn, on loan, we learned some tricks of the trade. Mi-Suk is not only one of Seattle’s most celebrated bartenders, but her passion for infusions goes back to when liquor companies were first developing flavored vodkas. The... Read More Hotel 1000 gave Seattle a night to remember on December 10th and with BOKA Bar’s Chief Mixologist, Mi-Suk Ahn, on loan, we learned some tricks of the trade. Mi-Suk is not only one of Seattle’s most celebrated bartenders, but her passion for infusions goes back to when liquor companies were first developing flavored vodkas.

The goal of infusion, if you aren’t too familiar, is to essentially instill fruits, vegetables or herbs in liquor until it achieves the desired flavor. The process itself requires time, patience, and a little bit of fearless experimentation but the rewards are more than worth the effort.

So if you’re eager to let the mad-scientist within have a bit of fun,  let me relay a few things Mi-Suk taught us:

During the class we enjoyed some complimentary BOKA bites and Mi-Suk gave us a crash course of which fruits and herbs typically compliments which  liquor by walking us through a few infusions and allowing us to sample a cocktail made from them. At the end of the night, after absorbing all the knowledge we could, Mi-Suk helped us each make a small jar of our own infusion. I’m normally not a big whiskey drinker, but the idea of using infusion to tailor a liquor to your palette intrigued me. With the master of Mixology to guide me, I selected a cinnamon infusion with a small slice of ginger root and orange peel to tame the rye whiskey I would be taking home with me.

As we approach Christmas day, if you’re still scrambling for a gift, consider putting together an infusion for a friend. Remember how you’d get those ‘brownies in a jar’ when you were a kid? Think of this as kind of the same idea. Put in your ingredients, dress up the jar and tape a note instructing when it would be ready for enjoyment, and voila, instant gift for the holiday season.

I know I’ll be curling up with mine on these cold winter nights.

Best of all, Hotel 1000 and BOKA will be hosting some equally fabulous holiday events until December 25.

Kiri Callaghan
Kiri Callaghan is a published author and expert dabbler. While making her way through written word, she has also developed a talent and passion for acting, directing, film, photography, singing and even some amateur clothing and costume design. A strong advocate of the "I'll try anything once" principle, Kiri is thrilled to explore the local lifestyle; including fashion, fitness, food and more! Find her books here If you'd like your brand, event, or business considered for an editorial or upcoming feature, contact us
View All Posts by Author
Visit Author Website