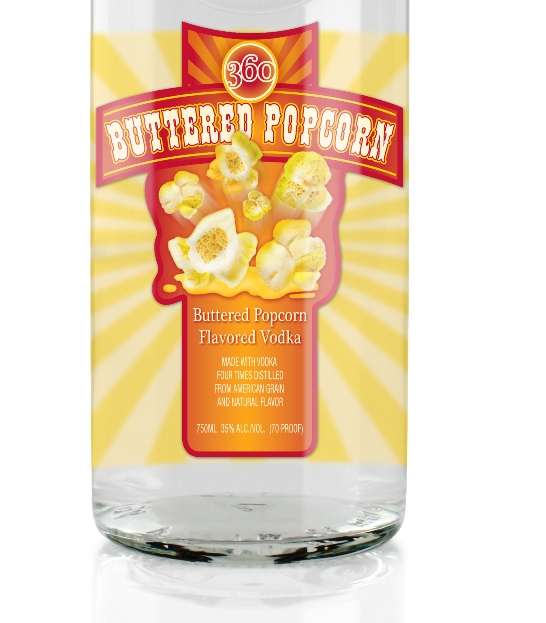 by Crave Editorial Team
It’s October, the time of year when corn is harvested and Americans eat more popcorn than ever, leading the Secretary of Agriculture in 1999 to declare October as National Popcorn Poppin’ Month. To celebrate, 360 Vodka has created a buttered popcorn flavor to honor America’s oldest snack food. With its telltale aroma and freshly popped... Read More

It’s October, the time of year when corn is harvested and Americans eat more popcorn than ever, leading the Secretary of Agriculture in 1999 to declare October as National Popcorn Poppin’ Month. To celebrate, 360 Vodka has created a buttered popcorn flavor to honor America’s oldest snack food.

With its telltale aroma and freshly popped corn flavor, 360 Buttered Popcorn captures that buttery goodness that has led Americans to eat 16 billion quarts of popcorn each year!

The first Europeans to colonize the Americas soaked popcorn in milk as a breakfast cereal, then in the 20s it became a popular movie snack and today, 360 Vodka has evolved this taste into a savory grown‐up treat. Add a splash of soda, garnish with a chocolate or candy and you have all your movie snack favorites in a glass with no mess or unpopped kernels!

“Classic and nostalgic flavors continue to dominate mixology trends and we’re thrilled to give cocktail lovers another innovative flavor to spark their creativity and treat their taste‐buds,” says Vic Morrison, Vice‐President of Marketing for 360 Vodka. “In June, we satisfied their sweet‐tooth with 360 Glazed Donut and now we’re appealing to their salty side with 360 Buttered Popcorn.”

With a collection of thirteen flavored vodkas, including the multiple award‐winning and favorite 360 Double Chocolate, 360 Vodka, the world’s only sustainable vodka is celebrated for perfecting innovative vodka flavors while leaving the smallest footprint thanks to the distillery’s numerous and significant sustainability practices.

We had a chance to try a sample of 360’s Buttered Popcorn flavor. We would describe it as a light butterscotch flavor, with hints of toasted popcorn. It’s a sweet flavor, but works well in everything from club soda with lime, to a more decadent dessert martini.

One of our favorite ways to drink it was in this recipe below, created by our mixologist team at Crave Local:

Shake tequila, vodka, and half and half together with ice, and strain into a chilled martini glass. Top with chocolate caramel popcorn.

Here are a few more recipes from 360 Vodka. We hope you enjoy!

Night at the Movies

Fill a tall glass with ice, add 360 Buttered Popcorn, top with cola and stir. Garnish with a lime wedge and fresh popcorn.

Rim a shot glass with sugar and salt mixture. Add 360 Buttered Popcorn to a mixing glass filled with ice and shake. Strain into the rimmed shot glass.

Rim a rocks glass with salt and pepper mixture. Add 360 Buttered Popcorn and Margarita Mix to a mixing glass filled with ice and shake. Pour into rimmed rocks glass.

Price and Availability:
360 Buttered Popcorn retails for approximately $15.99 (750mL) and is available at liquor retailers across the USA. Check the ‘Where to Buy’ section at www.vodka360.com for specific local retailers.