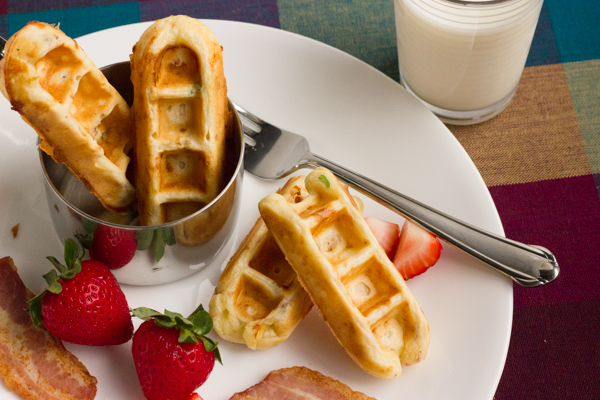 Making Waffles for Everyone with the Babycakes Waffle Stick Maker

by Jessica Tupper
I’m a huge fan of waffles, which are all over Seattle right now with waffle trucks popping up everywhere, and an even bigger fan of tiny, bite-sized portions. So I was thrilled when the Babycakes team sent me their waffle stick maker to review. On first appearance, it’s ridiculously cute. You have this cheerfully bright... Read More

I’m a huge fan of waffles, which are all over Seattle right now with waffle trucks popping up everywhere, and an even bigger fan of tiny, bite-sized portions. So I was thrilled when the Babycakes team sent me their waffle stick maker to review.

On first appearance, it’s ridiculously cute. You have this cheerfully bright orange machine which opens up to show off a nonstick coated interior with five reservoirs for waffle deliciousness. The instructions and buttons are simple, with ‘on’ and ‘ready’ lights, and the kit comes with a skewer for picking up your waffles and a measuring cup for pouring batter. Everything was fast to clean, and the manual clear and concise. 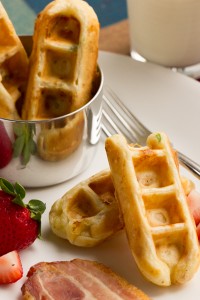 I made two recipes worth of waffles for the inaugural test: one a plain vanilla waffle recipe, and the other bacon/cheddar/scallion using a pancake recipe I suspected would be great in a waffle machine.

The vanilla waffles, for all their waffle-ness, showed off the inconsistent heating issues of the pan. I got about a third to that ideal golden brown, and would have had to seriously babysit the machine to not burn half of them. Also, the first time I made them some batter escaped the pan, so it’s good to have plenty of counter space for the test run.

The bacon/cheddar/scallion “waffles,” with finely cut bacon and scallions and shredded cheese, worked amazingly. The recipe I used created waffles that were golden, crisp, and addictive, and gone soon after I finished shooting. I suspect that the cheese and bacon fat worked as aids to make crispy magic happen. (If you want to try my version, very finely chop two pieces of cooked bacon, two scallions, and about a quarter cup of finely shredded medium cheddar cheese and mix in at the end.) 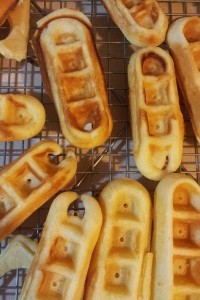 As someone who’s more than slightly addicted to professional-level gear, though, the waffle maker feels flimsy. The skewer to remove the waffles from the pan is small with a plastic base, which made me nervous to put it near the steaming pan. There’s no way to view or be notified when the waffles are done, so you need to set a timer and watch. Also, the lock isn’t very solid for the closed machine, so you’ll have to check that it latches. Lastly, the measuring cup they supplied wasn’t actually a sane size for either recipe I tested out. I ended up using a cookie scoop to dispense waffle batter, which worked great.

At a retail value of $24.99, I think you’re getting your money’s worth. Once you have the right recipe for the pan, you will produce large quantities of waffles quickly. Each batch I made filled a cooling rack, and they were gone the moment the waffles were cool enough to eat. I may have a lot of critiques, but I’m also someone who would probably have bought a heavier version of this, one that could take serious abuse. I think it’s great for that friend who wants waffles on occasion but doesn’t want to spend a lot on a machine, or is just getting started on baking. And I would definitely use it again for making food for a crowd, as the waffles go from mixing bowl to plate within five minutes. That alone is fantastic.