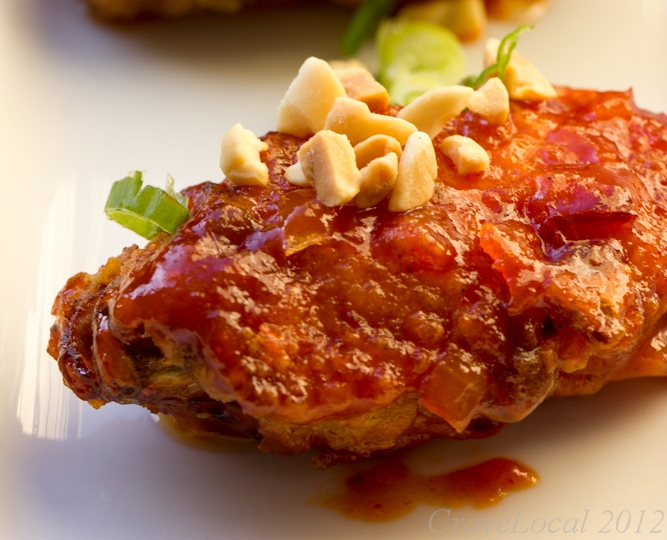 by EditorNW
The area around Pike Place Market is definitely tourist central: a place I generally tend to avoid, except for my treks into Sur La Table, or the occasional brunch at Cafe Campagne. This being said, the buzz for Heong Soon Park’s Korean fusion restaurant in Pike Place, Chan, has been infectious – I actually tried to... Read More The area around Pike Place Market is definitely tourist central: a place I generally tend to avoid, except for my treks into Sur La Table, or the occasional brunch at Cafe Campagne.

This being said, the buzz for Heong Soon Park’s Korean fusion restaurant in Pike Place, Chan, has been infectious – I actually tried to go previously, but had to reschedule, so the chance to do a happy hour review was a perfect opportunity I wasn’t about to miss again.

Now when I go out for reviews, there are two main ways I can do it. I can go unannounced with a gift card, or the entire staff can be warned and work with me through the tasting.

Both are fun, and potentially entertaining, but the first gives a more honest experience for standard service, and the second lets me ask more questions, or be picky about things. (Because really, it’s obvious what’s going on when a camera the length of my forearm gets pulled out to snap pictures of every last item, and I’m scribbling notes in between bites.)

I’m giving this warning because going to Chan was a seriously exemplary case of the second situation. We got to Chan at 5 PM on a Friday, so they were just setting up for the evening. Chan is simply decorated, subtly Asian, but any distinct region or culture, with low mood lighting.

Tucked in next to the Inn at the Market and Marche, it’s hard to post until you’re there. No music was playing, but that meant I could concentrate on the food.

Micah, our bartender, had the challenge of keeping us full with food, and was super helpful, cheerfully offering ways to balance the meal. Well, he was mainly keeping me fed – Joanna was there to test out the bar.

It started with the banchan sampler ($3), a tray of nibbles ranging from shiitake mushrooms to lightly pickled white daikon. As the happy hour options are heavy on kimchi and/or spicy proteins, I’d recommend you get it for something to soothe the burn.

The bulgogi slider ($3), with cucumber kimchi, scallion salad, and chili mayonnaise on a toasted bun, was just too spicy to really appreciate the sweetness of the bulgogi meat. I think a thicker cut of meat, and possibly a thinner bun, would help balance out the flavors. The chicken wings ($4), in contrast, were awesome. It was an order of three wings, topped with a reddish glaze, looking like meat-filled candy apples in the best way possible. Spicy, sweet, and crunchy, the peanuts and caramel sauce gave way to very moist chicken.

You’ll want to ask for a fresh napkin at this point; the sauce can get a bit sticky, and there’s no delicate way to eat them with chopsticks.

As Joanna admitted that she wasn’t one for poultry, Micah brought out the kimchi sampler ($3) and a bowl of mussels ($5). I think kimchi newbies would love the cucumber kimchi – it’s refreshing, with a light kimchi sizzle on the tongue, but almost like eating Japanese sunomono (if you like pouring on red pepper). It had a lingering heat, yet was still very mellow for kimchi. The mussels were fat and briny, with spice to back them up as well.

On top of all of this, a week before the review, we gave Park a bottle of Pierre Ferrand Dry Curacao and challenged his team to work with it in cocktails. Joanna and Park created a ginger, curacao, and sparkling wine cocktail that enhanced the spices, rather than focusing on the sweetness. I hope they add it to the menu rotation, as it was quite delicious. We shared the rice beer ice cream ($5) for dessert. I’m usually not one for alcoholic desserts, especially topped with brandy, but with the fresh raspberries, it was like eating frozen sabayon.

Chan’s not a place you want to bring friends who don’t enjoy spicy food-the experience will be entirely lost on their mild little palates.  While it was definitely toned down from an American perspective, pretty much everything was spicy, or topped with something spicy.

At $3-$5 a plate, I think even college students could be convinced to add some kimchi to their happy hour budgets.  Micah commented that he expects the place to be filled with locals once it gets dark early, and I wouldn’t be surprised.

I left with a smile and the lingering feeling of spice on my tongue. Park really has created a lovely hidden gem.

EditorNW
Editor at Crave Local Media Network. If you have an upcoming event, grand opening, great product, contact us
View All Posts by Author