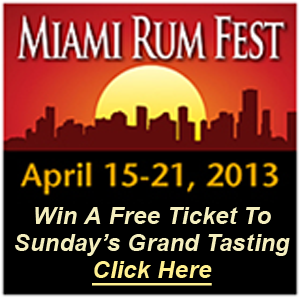 by CL Editor
The Miami Rum Renaissance Festival is serving the masses for its fifth annual event, and Crave Local is a proud sponsor of the event, giving away 10 free tickets to Sunday's Grand Tasting happening at 2 pm on April 21st.

The Miami Rum Renaissance Festival is serving the masses for its fifth annual event, and Crave Local is a proud sponsor of the event, giving away 10 free tickets to Sunday’s Grand Tasting at Miami Rum Fest, happening at 2 pm on April 21st.

Home to the largest gathering of rum experts, professionals and enthusiasts in the world, the event will be featuring more than 240 spirits from the Caribbean and beyond available for sampling, along with a selection of island-style cuisines you won’t want to miss.

As a rum collector and enthusiast, Robert Burr sensed what he termed the “awakening of rum” in 2005, and decided to direct his passion toward educating the community.

Burr took to the task of compiling a top 100 rums list of his favorite spirits, putting them each year into a free guide for local liquor stores. As he developed connections with other enthusiasts and tasting judges, he formed the International Rum Expert Panel, an organization of 36 cane-spirit lovers from around the world. He gathers the majority of these rum experts in Miami Beach each year for the Miami Rum Renaissance Festival, a celebration of the libation’s international varieties.

Email us for a chance to win a ticket to Sunday’s Grand Tasting ($50 value)!

Through the festival’s schedule of events, Robert aims to honor iconic spirits, while also featuring lesser-known rum makers and seriously cool brands that rum enthusiasts need to know about.

Saturday and Sunday, the event opens to the public for two full days of Grand Tasting events. Click here to get 50% off of Saturdays event.

Crave Local members are the first to hear about great giveaways, recipes, VIP access, and specials in their city. The winners will be announced on our newsletter during April, so be sure to sign up!