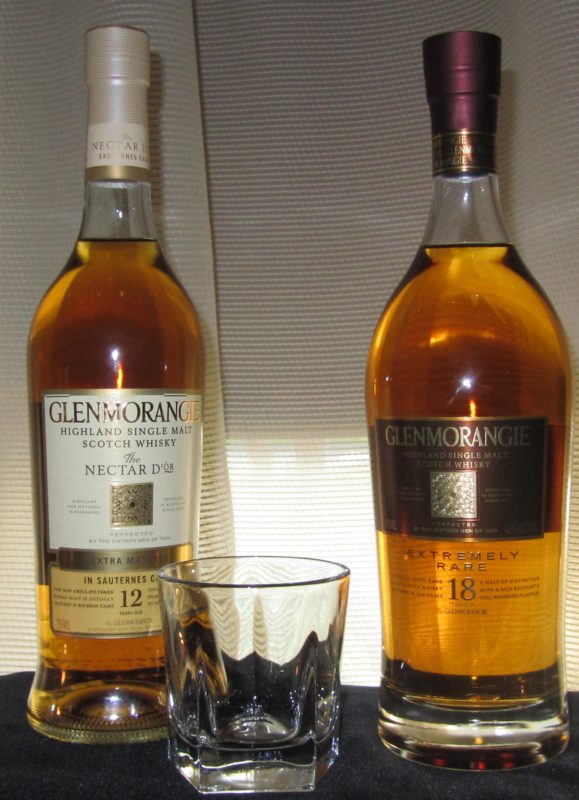 by Crave Editorial Team
This past weekend, we had the opportunity to try out Ruth’s Chris’ latest pairing dinner, this time featuring Glenmorangie scotch. Although not as common as wine and food pairing, brown spirits can make an excellent complement to a meal. There is no rule in food and spirits pairings, but the goal is to use each... Read More This past weekend, we had the opportunity to try out Ruth’s Chris’ latest pairing dinner, this time featuring Glenmorangie scotch.

Although not as common as wine and food pairing, brown spirits can make an excellent complement to a meal. There is no rule in food and spirits pairings, but the goal is to use each to enhance the flavors of the other. A truly perfect food pairing will bring out the oils and smokiness of a good scotch, and open your palate to a new experience.

Like wines and beers, scotches carry a wide variety of flavor signatures by region and distillery. Barley is the grain of choice, as when it’s malted, fermented and matured (generally in oak casks), it can take on a highly complex profile.

These profiles vary from house to house and cask to cask, especially once factors like port or sauterne wine casks are taken into consideration.

With the tallest malt whisky stills in Scotland, Glenmorangie is located in the Highland region, north of Inverness, near to the mouth of an inlet opening up into the North Sea.

Founded in 1843, Glenmorangie is renowned as a pioneer in its field uniting tradition with innovation to create what they term: ‘unnecessarily well made whiskies.’

Here’s our run down of Ruth’s Chris’ scotch tasting experience. After an introduction to the brand, and a few sips of champagne to wake up our palates, our first course was a Bacon Crusted Baked Goat Cheese with Guinness Maple Reduction. Two spheres of goat cheese were presented on the plate, atop sourdough croutons, with a lightly dressed and peppered bed of arugula in the center of the plate. The goat cheese was creamy and tart, balanced nicely by the praline flavors of maple syrup and the saltiness of the bacon.

This appetizer was paired with Glenmorangie’s Original 10 Year Old scotch. This is a very light, clean spirit, pale golden in color, with light smoky nature. Pronounced flavors in this scotch were of citrus and vanilla, complementing the sweetness of the dish, and nodding pleasantly toward the Guinness hops.

Our second course was a freshly made salad of Spring Greens, Apple and Walnut Salad with Balsamic Vinaigrette. The vinaigrette had been emulsified, creating a rich smoothness that kept the vinegar notes from overpowering this light dish.

Moet Imperial Brut Champagne was paired, and the nose was yeasty and reminiscent of apples and lemon zest, matching flavor for flavor in the salad.

Although many think of champagne primarily for celebrations, like many wines, personality can be brought out of a sparkling wine beautifully when paired with food. This was a standout moment at our table, as the oils from the fish and buttered toast just made the port notes and oils in the scotch pop. One of our tableside guests commented that after drinking this scotch, he ‘could not drink anything less ever again’.

This truly is a beautiful spirit, with aromas of oranges, oily woods, and spice. The flavor profile immediately made you think of walnuts, with their earthy bitterness, and silky texture. Quinta Ruban’s rosey golden hue is not artificial, but created from the dark rose tones the port leaves behind inside the casks.

My dinner partner stopped the wait staff from taking away his plate too early, because unlike the two dishes previous, he had paused to savor this pairing, lingering just a little longer to appreciate it. I have to admit-this is probably one of the best steaks I’ve ever had. It was perfectly seasoned (simply, with salt and pepper), cooked to a medium rare, and covered in butter-sauced wild mushrooms. Ruth’s Chris puts their plates under a broiler to finish (800 degrees), searing the exterior and sealing all the juices into the steak. When you have butter and meat juices popping and splattering all over a plate, it may not make for the best presentation, but one taste will have you savoring every bite.

The Casa Lapostolle Cabernet was an excellent wine pairing with filet mignon. It’s a deep, dark reddish purple wine with nice legs, especially for as young a wine as it was. We got dark berries and red fruits on the nose, with tobacco, oak, and a slightly herbaceous note at the end. This is a super juicy wine, round and full bodied.  Again, perfect to drink with red meats or Italian dishes. Drink now or hold for a few years.

Dessert was nearly unnecessary with the scotch that was to be paired with it, but nevertheless, Ruth’s Signature Bread Pudding with Drambuie Crème Anglaise was served-and delicious. This is a rich, creamy twist on a classic, with brioche bread as a base, raisins and Drambuie (a scotch based liqueur) adding just another layer of flavor to the dish.

Our last cocktail of the evening was a “Flight of 2: Glenmorangie Nectar d’or – Sauternes Cask finished Single Malt Scotch and their Extremely Rare 18 Year old.

I’ve had Nectar d’or from Glenmorangie before. It’s warm and fruity, with spice and almost a nutty, coconut scent. This scotch has notes of citrus and honey, with ginger, nutmeg and almonds coming through on the palate. The color is honey gold, and warms the soul.

We thought that was good. And then we dropped an ice cube in the Extremely Rare 18 year.

This scotch absolutely blossomed into a tiny, oak cask in a glass. This is a big, gorgeous, complex whisky, with dried citrus flowers and flirtations of smoke that makes you wonder what else is in that glass. Glenmorangie’s Extremely Rare 18 Year Old Scotch has a much longer finish on this spirit versus others, with toasted walnuts on the end notes. This is a pale gold scotch, with a ton of flavor waiting to be discovered.

If you have a scotch lover on your gift list, buy this whisky. You won’t regret it.

This was a well presented, perfectly paired spirits dinner from Ruth’s Chris.

We’ll be attending many more spirits pairings in our upcoming coverage for Tales of the Cocktail. If the idea seems odd to you-give it a try. We think you’ll be pleasantly surprised with what the right spirits and cocktails can do to enhance a meal.