Obama Beer: The White House Brews Up Ales and Interests

In a recent report from pollster Gallup, 66% of Americans drink alcohol, 39% of U.S. drinkers prefer beer over any other alcoholic beverage.  How fitting that the White House is now releasing their own home brewed Honey Wheat Ales.

This is the epitome of the American spirit and I, for one, am all for it. 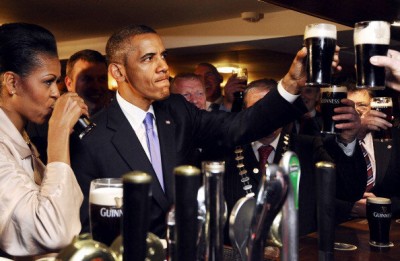 “To be honest, we were surprised that the beer turned out so well since none of us had brewed beer before,” writes Sam Kass.

Kass wrote that the “honey gives the beer a rich aroma and a nice finish but it doesn’t sweeten it.”

However, Brandon Skall, the chief executive of local brewery DC Brau, said it would “pump up the alcohol and give it some sweetness.”

The ale would likely pair well with a spicy and savory dish such as pork tenderloin or roast duck, said Skall, who added he would like to make the beers in his District of Columbia brewery. The porter would work well with a dessert or even floated with ice cream, he added.

THE AUDACITY OF HOPS?

The recipes were released as Obama headed to campaign in Colorado, a swing state that is embracing small, independent beer producers. The birthplace of Coors beer currently has the third highest number of craft breweries in the country, behind only California and Washington, according to the web magazine Atlantic Cities.

The commander-in-chief bought a home brewing kit last year and, according to media reports, has served the beer at St. Patrick’s Day and Super Bowl celebrations. Obama is now part of a growing movement – 28,835 people currently belong to the American Homebrewers Association.

Although George Washington brewed beer at his Mount Vernon home, there’s “no evidence that any beer has been brewed in the White House,” Kass wrote.

Last month, Obama told a man in Iowa that his campaign bus was stocked with White House beers, and even shared a sample. Curiosity came to a head in the last few weeks as recipe requests poured onto the White House’s online petition site known as “We the People.”

Obama’s opponent in the November election, Mitt Romney, belongs to the Mormon faith, which shuns alcohol. But the Republican Party could still tap voter interest – its vice presidential candidate Paul Ryan hails from Wisconsin, a major beer-making state, and he has professed affection for micro-brews.

The White House website’s link to the recipe is: http://www.whitehouse.gov/blog/2012/09/01/ale-chief-white-house-beer-recipe