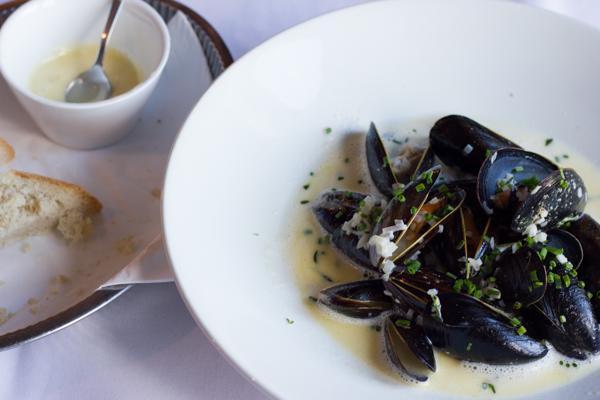 Mussels and Tarts at Havfruen, A Trondheim Delicacy

by Jessica Tupper
Havfruen is jovial. With a name meaning “Mermaid,” Havfruen is a fish restaurant located on the Nidelven, giving you an amazing view of the Bakklandet neighborhood. The space continues with its nautical theme, with ship memorabilia as accents around the sleek spaces and bar. And the joviality is incarnated in its owner, Mr. Herbert Klein,... Read More Havfruen is jovial. With a name meaning “Mermaid,” Havfruen is a fish restaurant located on the Nidelven, giving you an amazing view of the Bakklandet neighborhood. The space continues with its nautical theme, with ship memorabilia as accents around the sleek spaces and bar. And the joviality is incarnated in its owner, Mr. Herbert Klein, who wanted to show us the video of their 25th anniversary world record batch of mussel stew before we even sat down to eat. The video about the making of the 4000 kilogram mussel hoard is definitely worth watching, especially the nail biting moment when they prepped their custom made machine before displaying it live in the town square. It’s much better when paired with a serving for yourself afterwards, especially with extra bread for dipping in the white wine broth. The mussels, just to show the world record wasn’t for naught, are plump, briny joys to eat, with plenty of bread to sop up the broth.

When we were in the bar, I noticed one thing that will throw travelers coming in from major US cities: the cocktail list is simple, but well executed, mainly things like tequila sunrises and martinis. This is because shrubs, batch cocktails, and homemade infusions just aren’t popular in Trondheim yet. If you’re expecting rhubarb bitters and rosemary-infused vodka, you should probably visit Oslo.

The meal went from mussels, to salmon tartare, to a delightful test dessert: a white chocolate tart with pineapple sauce and passionfruit sorbet. With a near perfect crust and sorbet breaking up the sauce’s sweetness, it was one of the best desserts I’ve had in a restaurant in this year. Better still, the chef and I got into a discussion over what kind of vanilla beans would work best with the tart. Mr. Klein joined us again after the meal, and then chef Kai brought out a challenge: a small scoop of wine sorbet made from a blend of three reds, topped with shavings of the local blue cheese. Rarely does a chef completely throw me for surprise like that, and for that alone he deserves a tip of my hat.

After our meal, Herbert invited us, if we had time, to come back the next day and fish off the opposite side of the river. (In the summer he rents fishing poles, and you can spend a relaxing afternoon fishing for local salmon.) Sadly, we were exhausted and booked solid, but that’s the kind of experience you have at Havfruen.