by Jessica Tupper
I’m a pretty big fan of vegan cooking. I make vegan chocolate cupcakes regularly – not because of health reasons, but because they taste really good. (I usually cover them in not-at-all vegan vanilla frosting, but that’s its own discussion.) Whether you’re consciously choosing to avoid animal products or simply expanding your knowledge in the... Read More

Celebrating the life of Robert Mondavi

Chocolate Salon – A Taste of Luxury in Seattle 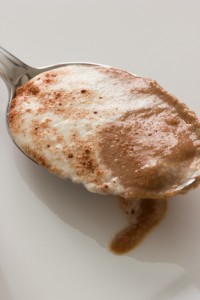 I’m a pretty big fan of vegan cooking. I make vegan chocolate cupcakes regularly – not because of health reasons, but because they taste really good. (I usually cover them in not-at-all vegan vanilla frosting, but that’s its own discussion.) Whether you’re consciously choosing to avoid animal products or simply expanding your knowledge in the kitchen for when your vegan friend shows up, knowing vegan cooking is a great tool, especially vegan desserts. And that’s why I was super excited to test out Sweet & Easy Vegan from Chronicle Books.

This book is a joy to read through. Major kudos to Robin Asbell for putting both weights and ounces in the recipes for anything larger than two tablespoons. It meant that since I had agar powder, not agar flakes, I could still make one of the recipes without an extra grocery trip. I did find myself wishing there were more pictures, but I liked the helpful tips for choosing seasonal fruit and the great ingredient glossary. The book ranges from cookies to cakes, so there’s a fair amount of range for dealing with picky eaters. 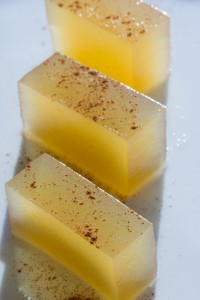 I made two recipes, an apple cider kanten and chocolate pudding. Kanten simply refers to agar powder-based gelatin desserts, and I always associate apple cider with fall, so it was a great place to start. I admit heavy liberties were taken – I couldn’t get a cinnamon stick, so I used ground, and I omitted the pears. (Pears are a rare fruit in our pantry.) Use the best cider you can get, because it simply tastes like chewable apple cider. Next time I make it I’d love to include some ginger and even more cinnamon to round out the flavors, but it was sweet and satisfying.

The vegan pudding was nutty and chocolaty, just not as thick as I was hoping for. It also wasn’t the greatest consistency, but I blame my food processor. (A blender was recommended and I don’t actually own one.) It did, however, open my eyes to cashew cream. Soaking raw cashews overnight, rinsing them, then blending with a little water and allowing to cool produces a wonderfully nutty, icing-thick sauce. I made a second batch right after this recipe, and I already bought more cashews so I can make quick-fix desserts when I don’t want to go grocery shopping. It is that awesome.

I personally wanted more desserts that broke the mental model people have of vegan cooking, but I think this is still a great book. If you’re curious about vegan desserts, or you just want to update your repertoire, grab this book and try a recipe or two.

Charlie Chaplin Teams Up With NYC Chefs as Rockefeller Ice Rink Opens For The Season
Previous Post
Rockefeller Center: Shopping, Events, History, and More!
Next Post
You May Also Like
The Ultimate Game Day Menu

Four Cocktails to Celebrate The Season