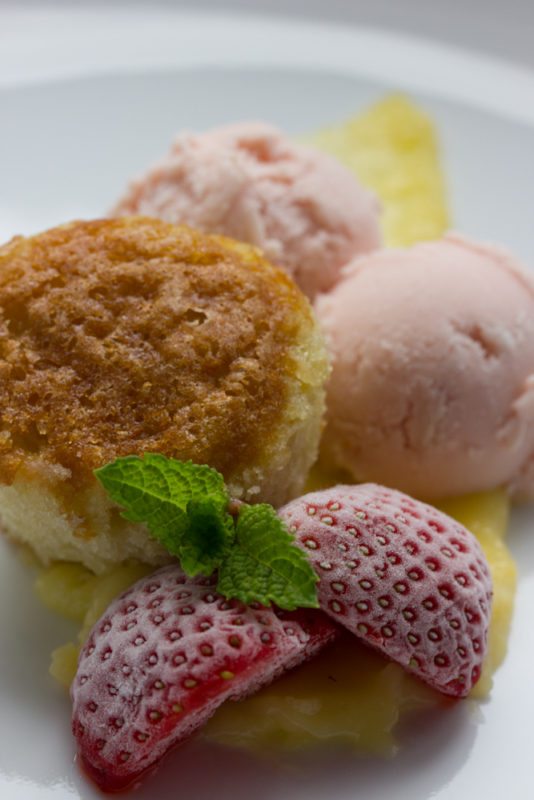 by Jessica Tupper
I had the good fortune to meet Alice Medrich when she was at Book Larder promoting Sinfully Easy Delicious Desserts, and I’m just as excited to test the book. The original title for this book was “The Cook’s Dessert“, and it shows – this is not as much a dessert cookbook as it is inspiration.... Read More , and I’m just as excited to test the book. The original title for this book was “The Cook’s Dessert“, and it shows – this is not as much a dessert cookbook as it is inspiration.

The pages are a mix of recipes and cooking tips.  Alice starts with ice cream – as in, a store-bought pint – and things to top it with. And there are a lot of parfait-type dessert executions. There are cakes and puddings, yes, but these are simplified as much as possible. Cakes and mousses are whipped up in the food processor, and the tart shell is press-in only. The pictures are stunning, of course, but the main goal here is accessibility.

I decided to make the lemon layer cake, which has three components: lemon curd, whipped cream, and vanilla cake. The lemon curd was a snap to make – throw items in pot, stir, heat, strain, chill. The vanilla cake was ridiculously easy as well, the only equipment a food processor and a springform pan.

Alice’s recipes are known for being foolproof and well-tested.

That being said, I screwed up the first batch with some expired baking powder. It was really dense, but still made for a great ice cream cake base, and my roommate loved it. The second cake, with fresh baking powder, was lighter in crumb though close to a pound cake. (Alice later told me on Twitter that regular King Arthur flour, the brand I used, was a bit gluten heavy for the recipe. I’ll try Shepherd’s Grain or possibly King Arthur’s  Gluten Free Flour next time.) Both, however, were aromatic and moist, even with my errors. Then I realized I was out of heavy whipping cream for the filling and had nothing to substitute for it. So both cakes got sliced up and topped with lemon curd, roasted strawberry and buttermilk ice cream, and a sauce made by boiling frozen strawberries in a pot. And it all tasted amazing. Maybe one day I’ll make the full dessert, but I was having too much fun just making the components.

I’m a pastry nerd, not a cook.  I totally love building parfaits and making marshmallows to watch them bounce. But I also adore shortcuts and ways to not be rolling doughs out all day when I want to go on a hike.

These recipes are simple, clear, and can be deconstructed and reconstructed at a whim. If you’re a cook that wants motivation to bake or a baker that wants inspiration, there’s a dessert in here for you.

Want to check out Alice’s book for yourself?  Sinfully Easy Delicious Desserts is available on Amazon, in most major book stores, or you can find it on Workman.com. You can also find a full list of Alice Medrich cookbooks here