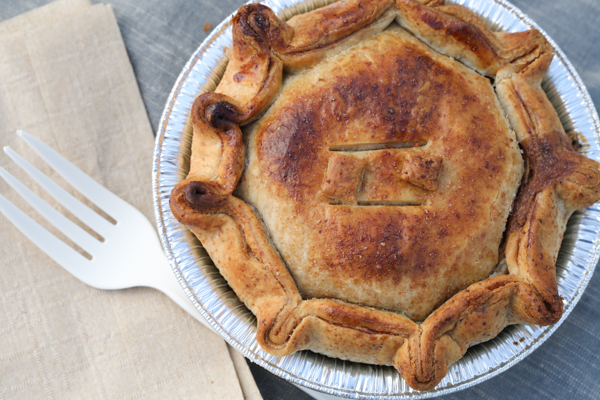 With fall approaching, I’m personally reaching for the comfort food. And so I went straight for pie – 314 PIE. 314 PIE is a yearling food truck serving New Zealand-style pies around Redmond, South Lake Union, and Queen Anne. It’s a team of two – Casey Cooper, a former baker hailing from Tom Douglas’s team, makes the pies, and Deke Kotrla, IT man extraordinaire, runs the truck. Deke is a true pie slinger, babying the pies while charming everyone waiting in line.

I checked out 314 PIE at their South Lake Union location, the exciting and always active parking lot for Glympse, which was baking hot. If you’re grabbing a pie there, you probably work for Amazon – and if you don’t, you can still eat in the shaded park area between the Amazon buildings across the corner.

314 PIE is an unusual truck – for one, it’s quiet. I took pictures inside the truck, and you won’t hear the familiar hum of a generator running while you order. Deke told me they have a custom propane warm for the pies from England, keeping them at the ideal temperature while reducing ambient noise. Also, since everything’s prepared offsite, grabbing a pie is a ridiculously fast process, which is great for anyone needing a filling, locally sourced meal on the go. Even the long lines for the day took less than five minutes to clear up. I’d recommend getting 1-2 pies to get a filling meal, but even a single pie is hearty. As for the menu, it’s pretty straightforward: savory pies (all $8), which rotate every 4-6 weeks depending on the season and their whims; a sweet pie; pie fries; and their chocolate chip and almond cookie. The current pie options are fairly comfort-focused, like the classic chicken pot pie, but Casey loves to experiment. Their current special is a Minestrone pie ($7), and they’ll probably move to a curry pie once the weather cools.

I tried two of their savories, the Steak, Cheese, and Mushroom Pie, and the Lamb Pie with Stout Gravy. The lamb pie is a thing of beauty. The stout’s there, building a warm, comforting gravy that was fantastic even in that heat. There’s a warm hit of pepper over the peas, carrots, meaty chunks of lamb, and all of that in a beautiful flaky crust. If I was to order one pie from PIE, it would be this one.

The Steak, Cheese, and Mushroom Pie is also good, and very heavy on the mushrooms and slow-roasted meat. The cheese was there, but more as a background savory note than a heavy hitter. I could see eating that one on a cold night when you don’t want to leave your bedroom. And topped with diamonds of sugar-crusted pie pieces, the seasonal berry pie ($4) is simple, just berries in a pie crust, and super delicious. I spotted raspberries, blueberries, and blackberries, so you can argue you’re getting a ton of antioxidants for all that fruity sweetness.

Then there was the chocolate chip almond cookie ($2). Stuffed with whole almonds and tons of soft, molten chocolate barely held together by a buttery dough, this cookie is made of magic. And butter. Mainly butter. I wouldn’t be comfortable ranking it as a great chocolate chip cookie due to the sheer amount of almonds that dominate each bite, but it is delicious. And huge – I was content to eat half of the palm-sized cookie and save the rest for later. Buy one, eat it warm, and don’t share.

They’re hoping to expand, with goals of moving the truck to more days in South Lake Union and even in the U-District. Definitely go by and get a pie – or two – and make your day that much more awesome.