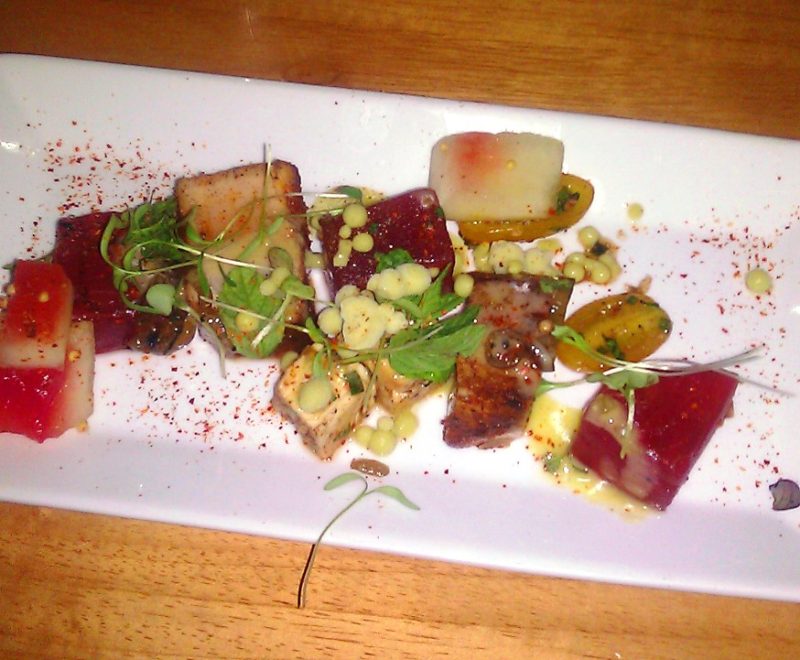 by Crave Editorial Team
During Tales of the Cocktail, a week long international cocktail and spirits education event in New Orleans, an economy-boosting feature for local restaurants is the annual “Spirited Dinner” series. The concept is simple: pair a restaurant team with a number of bar personalities, and host a food and cocktail dinner to delight the senses. The... Read More During Tales of the Cocktail, a week long international cocktail and spirits education event in New Orleans, an economy-boosting feature for local restaurants is the annual “Spirited Dinner” series.

The concept is simple: pair a restaurant team with a number of bar personalities, and host a food and cocktail dinner to delight the senses. The Crave Local team had the chance to attend the Kaleidoscope Spirited Dinner, held at Chef Phillip Lopez’s restaurant Root in the New Orleans warehouse district, with Lynn House from Blackbird of Chicago as the lead mixologist.

We were seated alongside Mitch Frank, associate editor for Wine Spectator, and Todd Price, food critic for the Times Picayune, who regaled us with topics from trips to Europe, to the remodeling challenges of historic New Orleans architecture, and an entertaining debate over who makes the best snowballs in town. (Hansen’s versus Plum Street is apparently a serious test of neighborhood loyalty.)

After Lynn introduced us to her concept of Kaleidoscope, and desire to produce an immersive, colorful experience, the dinner began.

The meal included two amuse bouches, five full courses, an intermezzo, and dessert. Dishes ranged from the crunchy and mellow first amuse bouche, which highlighted two forms of pickled radish, to the sweet and savory: a take on a falooda with Turkish spiced coconut milk and jasmine grapefruit sorbet.

Stand out dishes included the perfectly cooked black lacquered rabbit, which showcased the ridiculous power a sous-vide and patience can bring to a difficult to execute dish, and delicate sweet corn gnocchi with spicy, crunchy chanterelles. Chef Lopez is known for his use of molecular gastronomy, a certain change of culinary pace for a city that leans on cuisine as a great part of its culture. Some dishes worked well, like the Pickled Local Radish with Cauliflower Crema, Chocolate Espresso Gravel, and Hibiscus Tea Glass. Others were more unusual, but we applaud any chef willing to step that far outside the box.

The Gilded Citron Lobster Knuckle Galantine and Black Saffron Rice was delicious and presented with ‘bling’, complete with a crinkled edible gold leaf atop. A bed of coarse sea salt, cardamom pods, cloves, and what appeared to be tellicherry peppercorns provided a unique sensory accent-not quite edible, but certainly an enhancement to the richly flavored dish.

The Middle Eastern Falooda was entertaining to eat, as our forks were removed and replaced with soup spoons, thus forcing one to chase thick ropes of blueberry vermicelli in circles around the bowl. The flavors worked well together, however, with bright, fresh hints of anise and licorice from the basil seeds floating in coconut milk.

Although Lopez is known for his desserts (here’s the Root restaurant Peppermint Yorkie dessert recipe), the “Rocky Dirt Road” dish with beet leather was a bit of a palate stretch. The same for the beet ‘marshmallows’: pale pink, freeze dried cubes that immediately reminded us of astronaut food we had eaten on a dare during childhood.  The gravely bits of ‘chocolate dirt’ and rocky road ice cream were a nice textural contrast, and we devoured them from the chilled slate serving plate upon which they were served.

Root might be pushing boundaries with food and cuisine in ways that seem odd to traditional diners, but we see Chef Lopez as a rising star to watch.  As his next venture, Square Root, prepares to open in early 2013, we’ll be curious to see what develops from the clouds of nitrogen and freeze dried novelties swirling around in his kitchen.