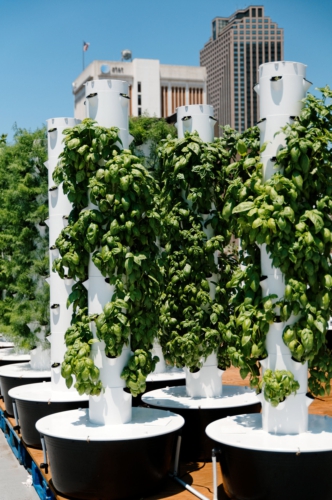 by Crave Editorial Team
The new rooftop garden on the Rouses Market in downtown New Orleans doesn’t look like your typical herb garden; but this isn’t your typical grocery store. Parsley, basil and cilantro are among the herbs the company is growing to package and sell on the building’s ground floor. Other businesses looking to transform their rooftop into... Read More The new rooftop garden on the Rouses Market in downtown New Orleans doesn’t look like your typical herb garden; but this isn’t your typical grocery store. Parsley, basil and cilantro are among the herbs the company is growing to package and sell on the building’s ground floor. Other businesses looking to transform their rooftop into a useable space may want to consider a commercial roof installation wherein rubber roofing is put in to act as a supporting surface to build something on, be it a garden, bar, or whatever else.

Rouses Markets is the first grocer in the country to develop its own aeroponic urban farm on its own rooftop, says managing partner Donny Rouse. While a traditional garden has to make ample use of soil, nutritive compost, and proper irrigation using something like a garden drip system, the urban garden set up on this store’s rooftop is innovative, requiring only a robust water system for the plants to grow. And they could not have picked a more picturesque location. “The flat rooftop on this store is perfect for urban farming,” says Rouse. “And the view of downtown is postcard-perfect. I imagine we will do a lot of dinners up here on the farm.” Rouses Markets downtown store sits just blocks from the Superdome, French Quarter, and Mississippi River.

The vertical aeroponic Tower Garden™ uses water rather than soil, and allows you to grow up instead of out. It was developed by a former Disney greenhouse manager, and is used at Disney, the Chicago O’Hare Airport Eco-Farm and on the Manhattan rooftop of Bell Book & Candle restaurant. “This is very cutting edge for urban farming,” says Rouse. His company has aptly named the farm Roots on the Rooftop.

Chef Louis “Jack” Treuting, Rouses Culinary Director, first saw Roots on the Rooftop as a way to provide fresh herbs for the food Rouses chefs prepare, but quickly saw potential to expand the program to include retail. “I knew if our chefs wanted it, so would our customers.” Treuting worked with New Orleans-based A.M.P.S. (www.ampsnola.com) on the Rouses system. “Aeroponics makes sense for the space,” said Treuting. “It is lighter than soil-based operations, and the towers recycle water and liquid nutrients through their own reservoirs, so they’re sustainable.” Should they ever wish to increase this project’s sustainability even more, they could have look at a wood alternative similar to Futurewood Composite Timber for decking or fences as the project hopefully expands.

While this is Rouses Markets first foray into urban gardening, the company’s roots are planted in the local produce business. Anthony J. Rouse grew up working for his father’s produce shipping company, City Produce, before opening his first grocery store in 1960. “My grandfather was a farmer at heart,” says Rouse. “He would have loved everything about this.”

Roots on the Rooftop officially launched on May 31st, one day before New Orleans kicked off its second annual Eat Local Challenge (www.nolalocavore.org). “The locavore challenge is to eat food grown within a 200 mile radius,” says Rouse. “In our case, we’re growing herbs less than 100 feet from our store.”

Rouses Markets is one of the 10 largest independent grocers in the United States. Owned and operated by a second and third generation of the Rouse family, the Louisiana-based company has 38 locations in two states, and employs over 5,400 team members. Rouses Markets has been consistently voted best supermarket and best place to work.