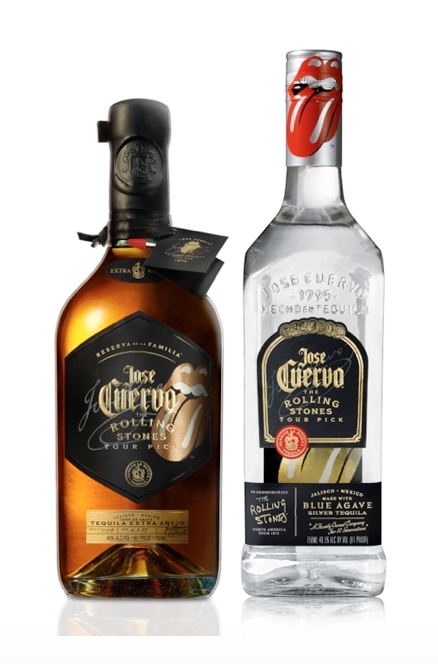 This week, Jose Cuervo® released two limited edition tequila bottlings of Especial and Reserva de la Familia® – entitled Jose Cuervo® The Rolling Stones Tour Pick – to celebrate the pivotal role Jose Cuervo® played in fueling The Rolling Stones™’ notorious 1972 North American tour, which was dubbed the ‘Tequila Sunrise Tour’. To set expectations, we need to somehow allude to that both bottles are not launching together….

Let’s set the stage. The decade is the 1970s. The band is The Stones, rolling across the globe, playing and partying their way into the rock ‘n’ roll record books. This is a time of excess in the United States, and no moment marked the American ethos more than the glittering glamour of The Rolling Stones™’ 1972 North American Tour. An endeavor of epic proportions spanning sold-out shows, countless after-parties, and an infinite entourage of celebrities, it is widely heralded as the greatest party of all time.

Yet like so many legendary stories big or small, the tour began with a sip of Jose Cuervo®. On the tour’s eve at The Trident bar in San Francisco, a bartender handed the band their first ever Cuervo®Tequila Sunrise cocktail. It was immediate hit with the hitmakers! The Stones dubbed it the official tour cocktail and Cuervo® their spiritual tour companion across all 32 cities and 48 shows. The rest, as they shout over the raucous ruckus, is history.

To celebrate the tour that became legend and the drink that fueled it, Jose Cuervo® will release two special edition bottlings of The Rolling Stones Tour Pick:
Special Edition Rolling Stones Jose Cuervo Especial®: For the pinnacle partier – those in the front row of the concert and front of bar in the nightclub – there is the Cuervo family’s blue agave recipe bottled at 81 proof, priced at $16.99 SRP.
Ultra Premium Rolling Stones Reserva de la Familia® Collectors Edition: For the indulgent reveler – those who want and appreciate the finer things that come with the rock star lifestyle – this is the private Extra Añejo tequila reserve of the Cuervo Family, priced at $149.99 SRP.