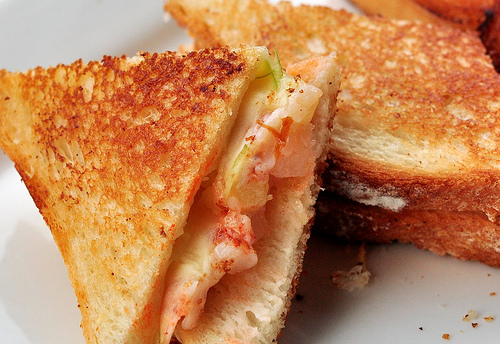 Preparation
1. Cut the tails off the lobster bodies, and into 1-inch pieces while the tails are still in their shells
2. Bring the Lobster Stock to a simmer and add the Sriracha, soy sauce and lime juice. Piece by piece, whisk in 6 tablespoons of butter until emulsified. Reduce the remaining sauce until it slightly thickens, about 2 minutes.
3. Toss the lobster tail pieces in oil with salt and pepper and cook for 1-2 minutes or until cooked through. Place the lobster pieces in a bowl and transfer to the fridge until cooled. When the lobster pieces have cooled, pop the meat out of the tails and set aside.
4. For each sandwich take two slices of bread. Place one slice of fontina cheese on top of the first slice, cover the cheese with some lobster meat, sprinkle ½ tablespoon of tarragon, cover with a second slice of fontina cheese, and then top with the second piece of bread. Brush the outer sides of each slice of bread with melted butter and season with salt. Grill the sandwich on the griddle and serve with a small bowl of the chili sauce on the side.

Winner of the Food Network’s Next Iron Chef (Season 3), Chef Marc Forgione began his career at the age of 16, joining his father, Larry Forgione –a culinary legend who revolutionized American‐style cooking in the ’70s and ’80s- in the kitchen at An American Place. Forgione fully embraced his father’s livelihood and has built on his unique culinary foundation to carve out an identity of his own.  With Marc Forgione, formerly known as Forge, Forgione’s first restaurant, he has created an approachable place “that people walk by and are compelled to enter and where the ingredients are the star.”  Forgione was most recently coveted with his third Michelin star in the 2012 guide, making him the youngest American‐born chef and owner to receive the honor in consecutive years (2010, 2011, 2012).