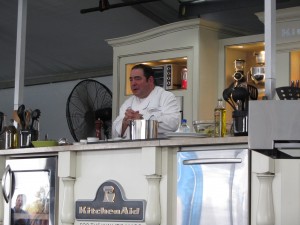 Festival founder and director Lee Brian Schrager is pleased to unveil the event schedule for the 2013 Food Network New York City Wine & Food Festival presented by FOOD & WINE benefiting Food Bank For New York City and Share Our Strength’s No Kid Hungry? campaign. Taking place October 17 – 20 the Festival will feature a dynamic line-up of returning signature events, a plethora of new soir?es and exclusive chef-driven dinners that once again brings top winemakers, spirits producers, chefs, and culinary personalities from around the world for an unparalleled weekend to Eat. Drink. End Hunger. in New York City. Adding to the excitement, the Festival is pleased to announce a new partnership with Hudson, Morgans Hotel Group’s celebrated hotel known for its whimsical design and iconic public spaces. As Headquarter Hotel, Hudson will serve as the ideal backdrop for a variety of Festival events, including wine and pairing seminars hosted by FOOD & WINE, complementing the move of the Festival’s central hub to Midtown West.

Mark the calendar: Starting Monday, June 10, MasterCard? cardholders will enjoy exclusive presale access to all of the Festival’s 100 events at www.nycwff.org or by calling 866.969.2933.

“We are excited to announce this year’s program, which highlights both fresh and returning signature events at new venues in Midtown, including Pier 92 and Pier 94,” noted Schrager, who also serves as the vice president of corporate communications & national events for Southern Wine & Spirits of America, Inc. “This year’s Bank of America Dinner Series also features a truly impressive line-up of host chefs from around the globe, paired with the finest wines from the Southern Wine & Spirits of New York portfolio.”

Gourmands and aficionados looking for one-of-a-kind wine and culinary experiences will be delighted by the line-up for the Festival’s Bank of America Dinner Series, featuring internationally-acclaimed chefs and fine wine pairings. The series will take place in venues across New York City and includes:

“I Love NY” hosted by Daniel Humm & Will Guidara

The Chef and the Doctor hosted by David Bouley & Dr. Mark Hyman

Inside the Empire: Dinner hosted by Pubbelly

A Night in the D.O.M. hosted by Alex Atala

General ticket sales for the 2013 Festival start Monday, June 24 online at www.nycwff.org or by calling 866.969.2933 (phone sales open 9:00 AM – 5:00 PM EST). 100% of the net proceeds from the Festival benefit Food Bank For New York City and Share Our Strength’s No Kid Hungry campaign. Stay up to date with the excitement by following the Festival at www.Facebook.com/NYCWFF or follow founder and director Lee Brian Schrager at www.twitter.com/Lee_Schrager.

GIVEAWAY ALERT: Summer of Agave Tequila Event
Previous Post
Aroniaberry Smoothie: Antioxidants For Better Vision, Energy, and a Great Start to Your Day
Next Post
You May Also Like