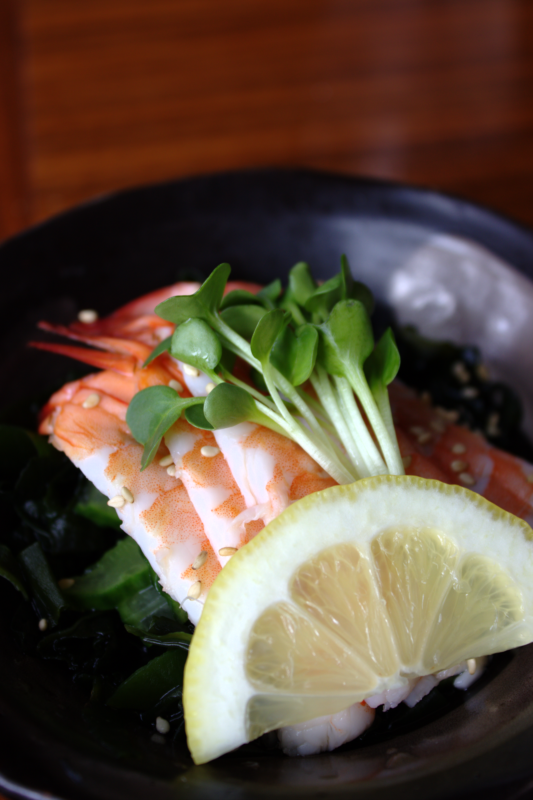 by Jessica Tupper
Chiso, from the outside, is unassuming and demure. It’s easy to miss, as you pass by signs for the Flying Apron Bakery and UPS. You can barely see  the restaurant until you walk down a pathway to the front desk. Inside, the sushi bar opens up to a minimalist dining area. The furniture is all... Read More

Chiso, from the outside, is unassuming and demure. It’s easy to miss, as you pass by signs for the Flying Apron Bakery and UPS. You can barely see  the restaurant until you walk down a pathway to the front desk. Inside, the sushi bar opens up to a minimalist dining area. The furniture is all stark blond wood, with demure grey mats on the booths, against the concrete floor. Paintings of blue faces smiled back at me as “e = mc^2” whispered over the speakers. Growing up eating Japanese food as a regular favorite, I was eager to try out Chiso and see what made them special!

I ordered shrimp sunomono, assorted tempura, and a caramel flan from the Seattle Restaurant Week 3 for $28 special, a repeat menu from the recent Dine Around Seattle. I also ordered a lychee lemonade, which was rather cloyingly sweet, likely from canned lychees in syrup, versus fresh. First, the meal came with miso soup. It was a delicate affair, white miso against abura-age, a type of fried tofu, onions, and spinach. The abura-age was a delight, fresh and chewy, without the sweetness people associate with the kind used to wrap inari at Uwajimaya.

The sunomono was unexpectedly executed, but lovely. Most Seattle restaurants use cucumber for the main pickling ingredient, often with some bay shrimp thrown in. Chiso’s sunomono was primarily seaweed, with an offering of cucumber hidden beneath three ebi shrimp and some microgreens. The ebi were a refreshing match for the cucumber and seaweed, light and savory. Although the microgreens were a bit overpowering, presentation was beautiful. A nice dish, indeed. On this visit, the tempura was hit or miss. The shrimp were juicy and hot, with a crisp breading. The sweet potato, though, was undercooked, and had caught on the mushroom, leaving both partially mushy. The green beans were the best part, crispy and tasting of spring goodness. Of all the food, I was most disappointed with the caramel flan. Not only was it incredibly sweet, in the way vanilla extract can overwhelm a dish, it broke one of the cardinal rules of flan. The edges were chewy, in that gummy way flans and custards get if they’re overcooked.

If I was visiting on a night where I wasn’t tasting a set menu, I’d come for nigiri and some rolls. This place is definitely more about the fish – and traditional Japanese fare – than anything else, and that’s not exactly a bad thing.

You can check out Chiso for yourself at 3520 Fremont Avenue North  Seattle, WA 98103, or  visit their website at chisofremont.com.