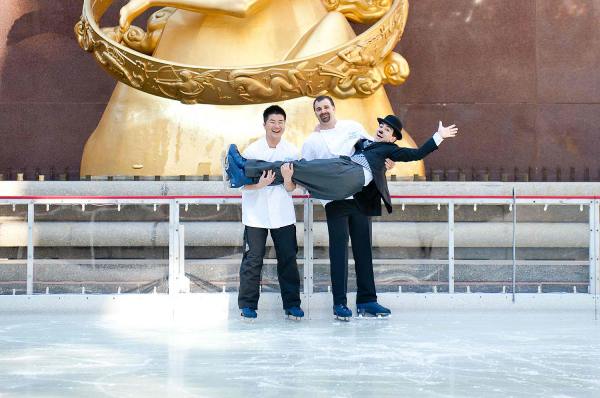 by Crave Editorial Team
New York City’s world-famous ice rink enters its 76th year with the First Skate of the Year featuring Broadway’s CHAPLIN star and Rock Center Chefs It’s one of the most anticipated events of the year in New York City – The Rink at Rockefeller Center  is now open for the 2012-2013 winter season. The First Skate... Read More 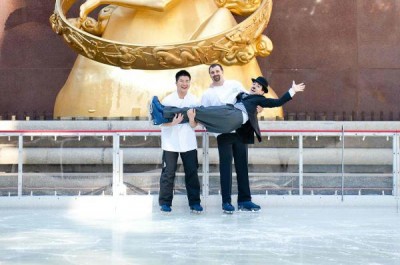 It’s one of the most anticipated events of the year in New York City – The Rink at Rockefeller Center  is now open for the 2012-2013 winter season. The First Skate of the Year featured Broadway’s CHAPLIN Star Rob McClure performing antics with Chef Yuhi Fujinaga of The Sea Grill and Chef Antonio Prontelli of Rock Center Cafe.  New this year is the launch of VIP Express Skating all day, allowing guests to bypass the line and enjoy hot cocoa and a personal skate concierge.

“The Rink at Rockefeller Center is a beloved fall and wintertime pastime in New York City, and now we are excited to launch advance reservations which allow guests to skip the lines,” says Nick Valenti, CEO of Patina Restaurant Group, which operates The Rink and its surrounding restaurants. “Our guests love skating but not the lines, so we added a skate concierge and reservations this year for faster access to the ice.”

The Rink offers several festive programs, and guests can make reservations by calling 212.332.7654, or visiting www.TheRinkAtRockCenter.com.  Activities include:

First opened on Christmas Day in 1936, The Rink at Rockefeller Center is now one of New York City’s most visited sites. The Rink also boasts night skating, a heated house for changing skates, and dining with scenic views of the rink at The Sea Grill and Rock Center Cafe. For more information please visit www.TheRinkAtRockCenter.com.
Credit: Thank you, The Rink at Rockefeller Center!
SHARE
National, New York, Special Events

Get a $5 Lunch at I Dream of Falafel on Black Wednesday
Previous Post
Make Tastier, Healthier Desserts with Sweet & Easy Vegan
Next Post
You May Also Like