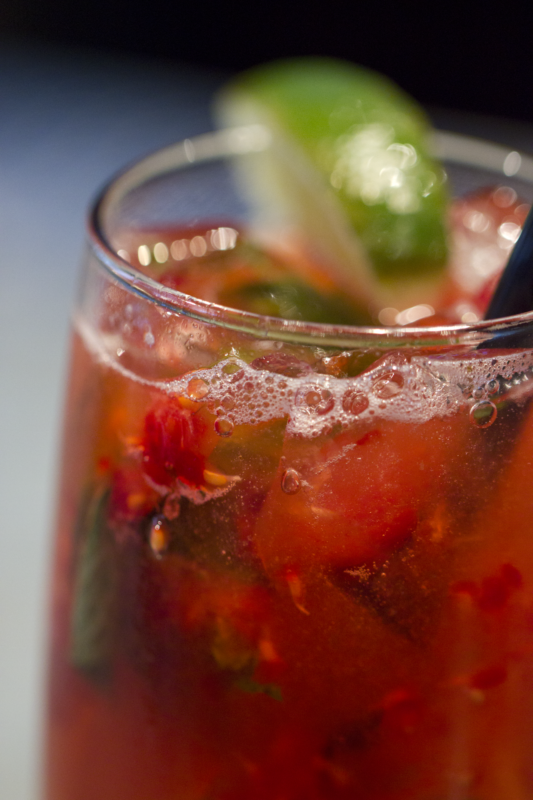 As I’m not one to complain when free drinks are involved, I set to this arduous task with Mike, who turned out to be as game as I was. I mentioned that I liked fruit and mint, so he started off with a Red Havana, a variation on a virgin mojito. He threw a good sized handful of raspberries in a glass, added a few sprigs of mint leaves, and muddled them. After a quick shake, he added soda and a lime wedge. It tasted strongly of raspberries, fresh and tangy, with a heady mint background flavor. It was even more refreshing once I squeezed in some of the lime juice, reminding me of a grown-up version of the Biringer Farms raspberry coolers I used to love from the Bite of Seattle.

After that, I asked Mike if there was anything he felt like making, or hadn’t made many of recently. I ended up with a virgin capirinha in my hands. It appeared to be a fairly simple drink – limes muddled with raw sugar to taste, then shaken with soda – but it was tart and crisp, perfect for summer sipping, with almost a caramel background with the raw sugar. I doubt I could handle the real deal, but this was outstanding.

I never did have the chance to meet with Mi Suk, but perhaps another visit will bring opportunities for a photo shoot.  Meanwhile, BOKA slings a mean cocktail, with or without alcohol, and I need an excuse to go back this weekend.

BOKA Seattle has both an early and late evening happy hour that are worth checking out. You can find reduced prices on their light bites like Padron Peppers,  Crispy Kale, and Truffle Fries, as well as desserts and cocktail and drink specials.