by Crave Editorial Team
While the Urban Dictionary defines “hipster” according to geographic location, hairstyle and attire, there is no indication as to a preference in wine. And yet there are wines that can definitely be called hipster-centric—and it’s not a surprise that they can be found on some of the best wine lists in Brooklyn. According to the... Read More

While the Urban Dictionary defines “hipster” according to geographic location, hairstyle and attire, there is no indication as to a preference in wine. And yet there are wines that can definitely be called hipster-centric—and it’s not a surprise that they can be found on some of the best wine lists in Brooklyn.

According to the Brooklyn wine directors I talked with, the man responsible for the first hipster list was William Fitch, wine director of Vinegar Hill House and Hillside, a restaurant and a wine bar located near the Brooklyn Navy Yard. It was a credit Mr. Fitch eschewed vigorously. He said his wine lists were never intended to be “hipsterific” (a word so catchy, I want to say it over and over again), but rather to showcase wines he admired and enjoyed.

But what are hipster wines? Perhaps it’s easiest to begin with a definition of what they are not. Chardonnay, for example, is clearly not hipster. “When I came back from Paris, I couldn’t sell a Chardonnay no matter what,” said Mr. Fitch, who divides his time between Paris and Brooklyn—with frequent visits to Portland, Ore., aka Hipster West.

Mr. Fitch’s list features quite a few hipsterific wines—from Slovenia to Beaujolais to Jura to Sancerre. The latter prompted me to ask: What is such a mainstream wine doing there?

The term “hipster” has also been applied to Krystof Zizka, wine director and co-owner of the new and decidedly hip (if not hipsterific) Maison Premiere in Williamsburg, though he said: “I’m not sure what it means.”

On the other hand, Mr. Zizka said he was willing to consider owning the label if it meant having “a sense of adventure, a willingness and drive to look for new wines, new regions.” He said that’s not only his own sensibility, but that of his customers. As he put it: “They’re not going to buy Yellow Tail.”

Instead, he said Maison Premiere customers are looking for natural wines and wines from places like Beaujolais and Muscadet.

“We sell a lot of Muscadet here,” Mr. Zizka noted. “Muscadet is cool.”

To learn more about muscadet wine, check out this article from DrVino.com.

In fact, the Maison Premiere list has a pretty impressive selection of Muscadet. There are young wines as well as some dating back to 1997 (as all hipsters know, Muscadet can age well). There are also Muscadets that cost as little as $35 a bottle.

That’s another aspect of hipster lists—they tend to be well-priced. One of the reasons has to do with the clientele; Brooklyn diners spend less money on wine than their Manhattan counterparts, said Mr. Zizka. Another reason is the cost of the restaurant itself: It’s (still) cheaper to run a restaurant in Williamsburg than Manhattan. 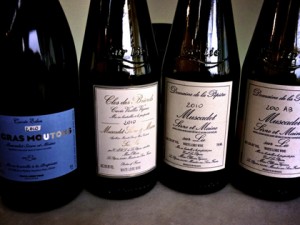 Eamon Rockey, general manager of the much-acclaimed Aska, a new Scandinavian restaurant in Williamsburg, also eschewed the hipster term. “I’m the least cool person in Brooklyn,” he insisted during a phone call. And yet Mr. Rockey, who was wine director of the equally hip (if not hipster) restaurant Atera in Manhattan before decamping to Brooklyn, dropped many references to dining in Copenhagen. No city is hipper than Copenhagen right now.

Mr. Rockey did know what the term “hipster” means to him when applied to a wine list. “It’s a wine list for a certain type of person—a list that’s full of small and ambitious producers,” he said. That certainly seemed to describe the list he and his wine director, Shiraz Noor, have put together at Aska. Their list focuses on small, highly regarded producers such as Tissot from the Jura (an obscure and decidedly hipster region in France) and François Chidaine from the Loire Valley.

As with the others, some of the wines on the Aska list seem natural and some not; for Messrs. Rockey and Noor, the most important thing was value. A hipster wine list has to have good value, Mr. Rockey said. “When you don’t have the space to pack the list with big names and labels, you have to create value somewhere else—to give them something special.”

In the case of Aska, that means a particularly good selection of Beaujolais, including wines with some age.

Are there any wines that are difficult to sell to hipster customers, save, perhaps, for Chardonnay? “It’s very hard to sell Bordeaux in Brooklyn,” offered Mr. Noor. “Bordeaux is more challenging to sell than wine from the Jura.”

And yet according to Mr. Fitch of Vinegar Hill, the greatest advantage that Brooklyn wine directors has is their customers’ general openness.

“There is a huge diversity of customers in Brooklyn—and wine lists,” Mr. Fitch said. The same isn’t true of even the hippest Paris restaurant, he noted: “Paris lists are extremely French. Even the sommeliers don’t know Spanish wines.” But when a restaurant in Paris is cool, Mr. Fitch added, its fans have a phrase to describe it: “C’est tellement Brooklyn!”