Beyond the Confines of Food: In the Vineyard with Chef Michael Chiarello

by Courtney Walsh
Chefs today are more akin to celebrities than actual cooks. Spending far more time promoting themselves on cooking shows and at food festivals than in actual kitchens, these celebrity chefs have amassed culinary empires filled with lines of sponsored products and cookbooks. So is it any surprise that a chef sponsored wine label would follow?... Read More

Chefs today are more akin to celebrities than actual cooks. Spending far more time promoting themselves on cooking shows and at food festivals than in actual kitchens, these celebrity chefs have amassed culinary empires filled with lines of sponsored products and cookbooks. So is it any surprise that a chef sponsored wine label would follow?

After all, everyone from a sports star to a Real Housewife knows that there is no better way to show you have arrived than with your name on a bottle of wine. For these celebrity chefs, once their name was slapped onto the label, they moved on to their next marketing conquest. Few, if any, actually make it out to the vineyard or winery to make any kind of decision as to what goes into their eponymous bottlings.

Yet for one chef, not content to remain within the confines of traditional cooking, turning to wine was simply a natural extension of his culinary talents. Rather than viewing winemaking as a business model, he used it as an outlet for further culinary creativity in which wine evolved past an ingredient to incorporate into a final creation, but rather became the creation itself.

That chef is Napa Valley’s own, Michael Chiarello.

A culinary legend in his own right, the award winning chef and Emmy winning TV personality opened his eponymous winery, Chiarello Family Vineyards, in 1995, with the focus on creating limited production, estate wines produced from a once forsaken twenty acre vineyard surrounding Chiarello’s home. The chef’s pre-prohibition, own rooted vines of Petite Sirah and Zinfandel would likely have been uprooted by many others in the valley in favor of planting the prized, money-making Cabernet Sauvignon. Yet Chiarello saw the vineyard as a challenge and was determined to see if it was possible to make exceptional wine from a once thriving vineyard.

Personally farmed by the chef using head pruning and dry farming, after eight years of reworking the soil, the vines began to naturalize and the vineyard’s ecosystem re-established itself. The wildlife returned and the vineyard’s soils were now alive.

Working alongside award winning winemaker Thomas Rivers Brown, Chiarello’s wines have consistently garnered high praise from many in the wine industry, constantly receiving 90+ scores from a number of critics. But for the chef, Chiarello Family Vineyards was never about making money.

“After all,” Chiarello explained “winemaking is a horrendous business plan. Could you imagine having to make 17,000 plates of pasta before you can sell one?”

Instead, for Chiarello, “winemaking, was just another way of cooking…a natural extension of who I am as a chef.” Through his time spent in the vineyard, Chiarello discovered that wine was able to re-express the same sentiment as food. Equating the process to cold cooking, the chef described winemaking as simply a raw ingredient that is transformed into something else. Yet unlike cooking, he explained, “you can’t throw out the ingredients or start over with wine. You can only change one thing at a time.”

Having grown up a farm boy himself, Chiarello takes great pride in his vineyard, and most importantly, his soil. Strongly committed to sustainable and organic farming, for Chiarello, his soil is his life. “If I had to make a choice, it would be family first, soil second, a slight second.”

Farming organically since day one, Chiarello noted that it is becoming increasingly harder for farmers today to farm organically due to rising costs and a repositioning of the family structure. Costing nearly $5,000 more an acre to farm sustainably, Chiarello’s decision to farm organic and sustainable was more than a large investment, it’s a commitment to the future.

Despite managing over half the winemaking process, Chiarello still views himself as a glorified sous chef for winemaking. But while he doesn’t handle fermentation, leaving that to Brown, Chiarello is instrumental in ensuring the quality of grapes going into every single bottle of wine.

“I didn’t want entertainment only on the plate, I wanted it in the glass too.”

Courtney Walsh
Courtney is a ten year veteran of the food and wine industry. Spending two years traveling throughout Europe and the Middle East, she quickly became obsessed with all things wine and after completing her Master’s Degree in History, she then went on to achieve her Certified Sommelier certification. She currently works as a freelance wine writer and as a wine buyer for a local wine retail shop. In her spare time, Courtney spends her days traveling and searching for her next great meal.
View All Posts by Author
Visit Author Website
Celebrate Game Day With Seahawks and Patriots Themed Cocktails
Previous Post
1/31 Wally’s Wine and Spirits hosts annual Union des Grands Crus Bordeaux Tasting 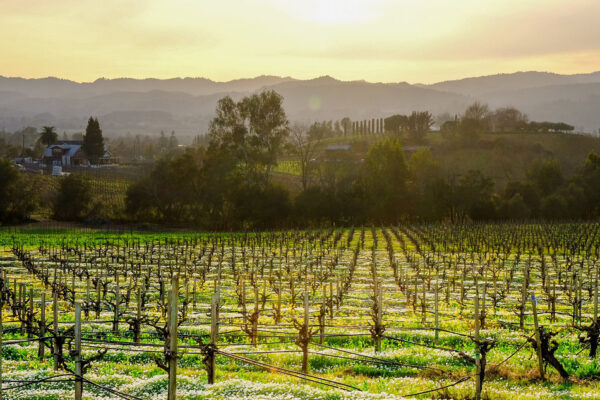