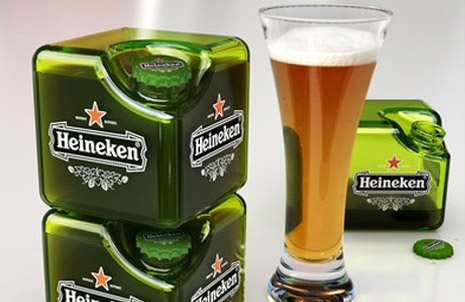 The Heineken Cube: The Beer Industries Answer to Boxed Wine

by CL Editor
Wine and spirits companies have played around with alternative packaging for years. Easy to stock, travel with, and resealable, but what's the consumer take?

Some people would argue that there are many reasons to drink or purchase boxed wines.  It has actually been documented that there has been an increase in boxed wine sales over the years.  Some stated advantages for this packaging preference are things like:

But how well would boxed beer go down in a market used to drinking their favorite brews from cans and glass bottles? French industrial designer Petit Romain has dreamed up a square glass container he dubs the Heineken Cube. The stackable units would optimize storage along the supply chain, from manufacturer to consumer, according a description on Romain’s website.

The “minimalist form” would lead to “significant fuel economy during transport,” making for a more “economical and ecological” way to drink, he says.

But before drinkers get out their pitchforks or flood into stores, know this: Romain’s design is just a concept.

And an “innovative” one, according to Eric Shepard, editor of trade magazine Beer Marketer’s Insights.

“Clearly, the brewers are trying very hard to catch up a bit with what spirits companies have done with packaging, whether it’s the aluminum bottles, more interesting cans, labels, etc.,” he said.

If ever turned into a reality, the beer boxes “would create interest,” said Adam Rogers, a research analyst with the Beverage Information Group.

“But, in all honesty, the person doesn’t look comfortable drinking straight from the cube (looks like he’ll hit his nose on the cube before finishing the beer) so it would have to be poured out,” Rogers wrote in an email about an image of a man drinking from one of the boxes.

“If it was larger and had a tap similar to boxed wines, I can see it having some legs,” he said.

Wine and spirits companies have played around with alternative packaging for years. Stacked Wines, for example, sells a “four pack” of stemless wine containers that vertically stack to form the equivalent of a bottle and separate into hand-held single-serve glasses.