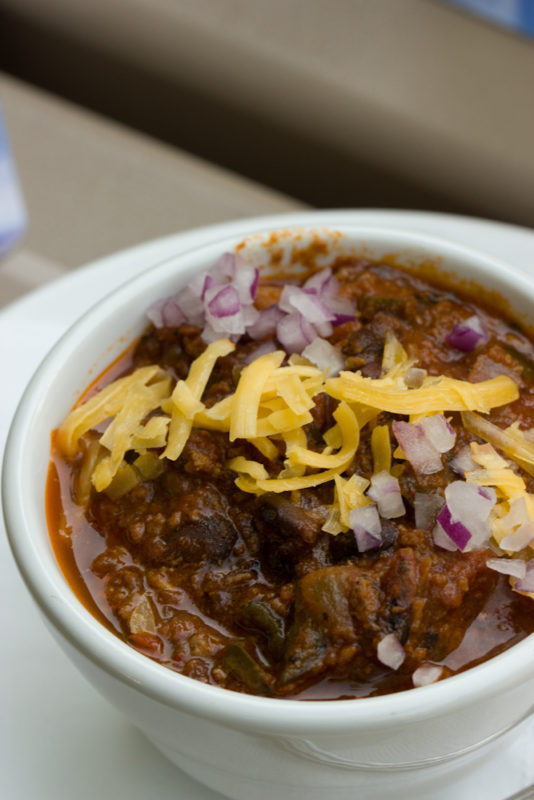 by Jessica Tupper
Normally when I do a food review, I may talk with the staff a bit, and maybe I get a short tour of the facilities, but I’m generally left to my meal. At Dexter and Hayes Public House, I spent more time hanging out with people than I did eating. Oh sure, Julie showed me... Read More Normally when I do a food review, I may talk with the staff a bit, and maybe I get a short tour of the facilities, but I’m generally left to my meal. At Dexter and Hayes Public House, I spent more time hanging out with people than I did eating. Oh sure, Julie showed me about, from the back garden seating area to the billards table, but then we got into a discussion about hair. I’m pretty sure I convinced one of the bartenders, Michelle, to donate most of hers to charity. I felt like a regular already, and I hadn’t gotten to the food yet.

I ordered the chili, a carnitas taco, the vegetable napoleon, and a plate of bacon. If you eat pork, get the bacon. Plated with far less reverence than the candied Nueske’s from Lot No. 3, I liked this bacon better. It’s a thick cut variety from Better Meats and smoked on site, so while it’s not candied, I’m all for their nickname of ‘bacon crack.’ The chili ($6) was thick and meaty, spicy but not overkill. It’s a chunky ground beef and bean variety, with visible pieces of tomato, onion, and peppers. (Michelle brought me sriracha and tapatio sauce, but I was fine with it as is.) It comes with chopped red onion and grated cheddar, which were great additions. I did find the bread that accompanied the chili to be sweet and a tad dry on its own, but worked with the chili for sopping up sauce. The carnitas taco ($3), with double corn tortillas, also had pork that was smoked on site. I found it to be slightly too crispy on its own, but the sour cream helped to balance textures.

The vegetarian napoleon ($9) was a tall strata of roasted zucchini, hearty cream and goat cheese, and wilted spinach, topped with breadcrumbs and spices, mainly paprika. With pita chips on the side, it worked better as a shared dip than an entree. I want tweaking for optimal vegetarian snacking to compete against that bacon. I’d love to see it baked in thinner, wider layers to get even more breadcrumbs and spices on top. For drinks, I tried two mocktails, a mojito with orange juice and a grapefruit-grenadine concoction. The mojito, with fresh mint from the garden, was refreshing, and the grapefruit-grenadine drink was sweet, reminding me of the Canadian-style Shirley Temples I used to indulge in.

At the end of my meal, Julie came by again and we compared childhoods. Apparently we both survived animal attacks; Julie ‘won’ if you want to call it that. Julie also talked about her goal of having a place for regulars that was still a nice place to visit. While I do wish the patio wasn’t smoking friendly (I’m way too sensitive), I think she succeeded. You’re not going to come here for fancy platings or molecular gastronomy. You’re going to come for some good grub, maybe some chili for the ride home, and to catch up with the regulars.