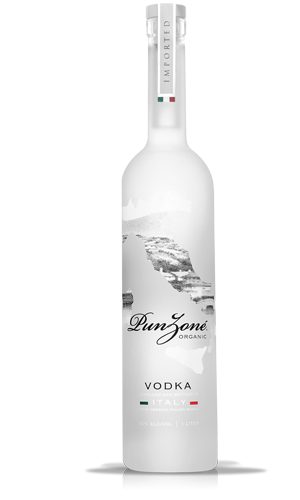 Italy is known as a culture of fine foods and wine, simple recipes and superior fresh ingredients. Newly launched, Punzoné ® vodka represents each of these elements bringing the first line of imported Italian organic ultra-premium vodka spirits to the U.S.

Imported directly from Piemonte, Italy’s preeminent food and wine geography, the unprecedented and remarkably smooth vodka products are comprised of three organic beverages, all of which are crafted using organic wheat grown exclusively in North West Italy: Ultra-Premium Punzoné Vodka, Punzoné Originale (a vodka, red sangria and blood orange infused beverage) and Punzoné Lemoncino (a vodka, white sangria and lemon infused beverage). Punzoné’s products are produced by renowned family run winery, Cantine Sgarzi Luigi, one of the world’s leading wine specialists since 1933. Punzoné is the first line of spirits to be formulated and produced at the winery.

Punzoné, which means ‘punch’ in Italian, is the brainchild of New York based Italian-American entrepreneur Frank Guerrera. In 2007, Guerrera had a vision to craft an all organic and pure line of Italian vodka, including his prized homemade recipe for Punzoné Originale. In a few short years, he had secured federal and International community trademarks for the Punzoné brand and established the company as a federally licensed importer/wholesaler in the U.S. In addition to establishing the relationship with Cantine Sgarzi Luigi and working countless hours with chemists to determine the right mix of ingredients, Guerrera worked to secure USDA Organic and EU Organic certifications for each product’s formulation and ingredients. All products have passed the stringent TTB approval process that is required of new spirit brands.

“Many years ago, I started down the road to creating Punzoné. After extensive research and devotion, we can proudly say that everything about this vodka line is authentic Italian – from the all natural organic ingredients to the craft involved in the formulation, distillation, production and bottle design,” said Frank Guerrera, President and Founder, Punzoné, Inc. “We are very proud of the final results since this was a real labor of love. I think consumers will also agree that this is a one-of-a-kind vodka with a fresh taste, creamy and velvety texture and a smoothness that truly stands out.”

In the coming months, Punzoné will also be rolling out across the country to several top markets. MHW Ltd., an internationally recognized New York-based company, has been engaged as the national importer and licensed wholesale distributor for New York, New Jersey and California.

“Guerrera has pushed the limits with his perseverance and attention to detail in order to bring the Punzoné line of spirits to market. It is no small feat to take on a project like this and every bottle produced will have a splash of his passion in it. I applaud Guerrera’s vision and determination,” said John F. Beaudette, President and CEO, MHW Ltd.

Punzoné employs a unique, continuous five-column distillation process, perfectly crafting the crystal-clear and velvety taste at the heart of the Punzoné vodka experience. In order to produce its high-quality vodka, Punzoné uses only water from Italian Alps springs. This unique pure water is balanced, light and ideal due to its low mineral content. The extract is obtained only from organic wheat grown in North West Italy. The Punzoné products are as follows:

Punzoné Originale –  an exquisite fusion of its ultra-premium vodka enlivened with organic Sangiovese-grape sangria and natural blood orange essence, sourced from the finest organic groves in Southern Italy. Punzoné Originale is a family recipe that has been perfected and handcrafted for decades. It is a Ready-to-Drink cocktail meant to be consumed shaken and chilled as a martini, on the rocks, or as a shot.

Punzoné Lemoncino  – a delicate blend of its ultra-premium vodka refreshed with white sangria from organic Chardonnay grapes grown in the Abruzzo region and a natural Sicilian lemon essence. It is a Ready-to-Drink cocktail meant to be consumed shaken and chilled as a martini, on the rocks, or as a shot.

Every single ingredient in all three Punzoné vodka products is sourced straight from the ground to the bottle and has been certified organic by the United States Department of Agriculture (USDA) and the European Union. In Italy, the specialized authority for organic products, Consorzio per il Controllo dei Prodotti Biologici Soc. Coop, constantly ensures that all the facilities of production in country are verified.

Jessica Tupper
Jessica Tupper is busy, and likes it that way. As the Food Ninja, she likes to figure out new ways to explore the Seattle food scene - from eating at all the Tom Douglas restaurants in one day to epic sundaes using Bluebird and Molly Moon ice creams. Silly hats may or may not be involved. If you have an upcoming event, grand opening, great product, contact us
View All Posts by Author
Republican National Convention is Eating in Style in Tampa
Previous Post
Learn About History and Culture of Edomae Sushi From The Masters
Next Post
You May Also Like