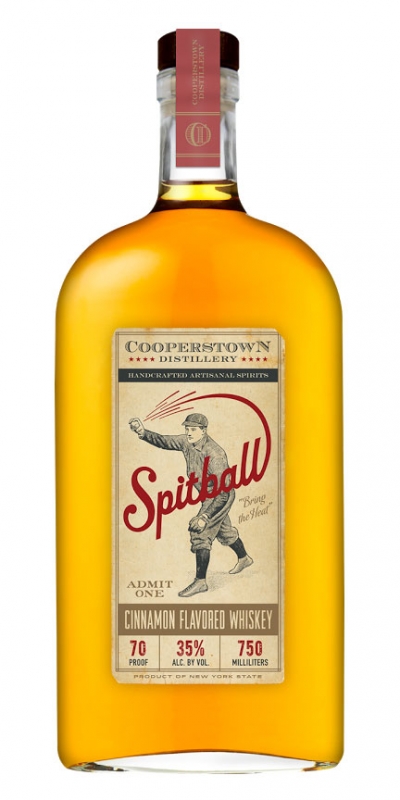 by Press Release
Cooperstown Distillery, a micro-distillery in upstate New York that seamlessly marries award-winning spirits and America’s favorite past time – baseball, announced today the upcoming release of their latest “Spitball” whiskey, a complex spicy spirit that caters to the cinnamon-flavored whiskey craze that has swept the country. Up to bat starting April 4th to coincide with... Read More 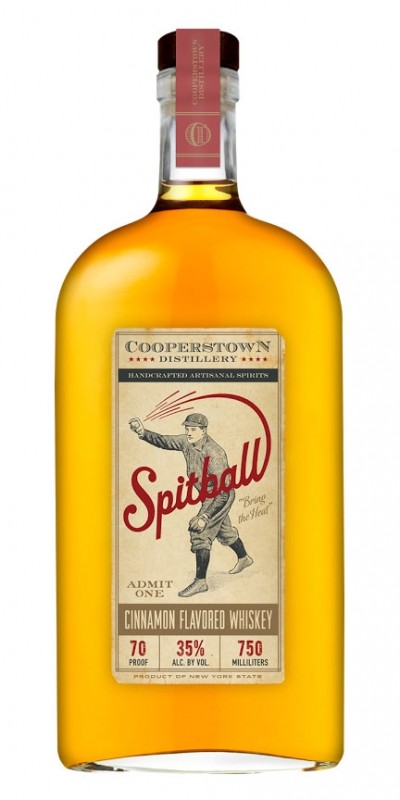 Cooperstown Distillery, a micro-distillery in upstate New York that seamlessly marries award-winning spirits and America’s favorite past time – baseball, announced today the upcoming release of their latest “Spitball” whiskey, a complex spicy spirit that caters to the cinnamon-flavored whiskey craze that has swept the country. Up to bat starting April 4th to coincide with opening day of baseball season, Spitball whiskey will be available for purchase online and at Cooperstown Distillery.

Named “Spitball,” a nod to the controversial, threatening and ultimately outlawed baseball pitch of the early days of the game, this new whiskey packs a powerful punch of heat, reminiscent of other cinnamon whiskey brands, but finishes with undertones of coffee, chocolate and caramel.

At 70 proof and ‘just a tad sweet’, the brand says this great new product is ‘not just for shots’. They state that Whiskey connoisseurs will also enjoy this spirit by sipping it straight, on the rocks or added to beer or coffee.

Are you a Fan of Spicy Spirits? Check out the World’s First Infused Añejo Tequila!

In addition to Spitball, Cooperstown Distillery also welcomed two additional craft spirits to their team – Cooper’s Clear White Whiskey and Sam Smith’s Boatyard Rum, and created The Triple Play, a perfectly packaged collection of three bottles of bourbon, vodka and whiskey, for the biggest ball fans. The full portfolio of spirits are now available for purchase online or at the distillery, located in the heart of Cooperstown, New York, the home of baseball and National Baseball Hall of Fame.

Cooper’s Clear White Whiskey: A white whiskey distilled from bourbon mash, Cooper’s Clear is made with locally sourced corn, oats, and rye, and briefly aged in an American oak barrel. The surprisingly smooth, sipping whiskey complex finish with spice notes of clove on the front and a bit of vanilla and cinnamon on the finish. Named after James Fenimore Cooper, an early American novelist and son of Cooperstown’s founder, William Cooper. Priced at $30 for 750ml.

Sam Smith Boatyard Rum: Our tribute to local Cooperstown figure, Sam Smith, a world class champion yachtsman, and avid rum lover. This beautiful amber rum is domestic, Florida made rum, and is aged in used bourbon barrels in our bonded warehouse. Made from 100% non- gmo sugar cane molasses, this Caribbean style rum is aged a minimum of two years. It is delightfully smooth with soft spice notes on the nose and the faintest hint of vanilla on the finish. A sophisticated rum at 86 proof. $30 for 750ml.

Editor’s Note: Either by comparison to ‘other cinnamon whiskey brands’, or use of the word ‘ball’ in the name, it would appear that Cooperstown is making a play, like many other brands, for the Fireball Whiskey space. No price was mentioned in this news announcement.

In addition to their new collection of spirits, the distillery also produces Glimmerglass Vodka, made from 100% New York State wheat and named after Glimmerglass Lake, James Fenimore Cooper’s bucolic setting for many of his novels; Beanball Bourbon, named after the dangerous baseball pitch“ the beanball,” is a young bourbon, sourced from Indiana that’s very mellow and finishes with toffee, clove, a bit of vanilla; and Fenimore Gin, a deliciously smooth and meticulously crafted gin named after the prolific 19th century American writer, James Fenimore Cooper that features 14 proprietary botanicals including the native New York lilac flower.

Cooperstown Distillery features an elaborate tasting room for all of their spirits, including the new cinnamon whiskey, with an extensive bar menu offering free tastings and tours daily. The distillery is complemented with an eclectic retail shop that carries exclusive barware and artisan mixers such as bitters from Brooklyn Hemisphere and Fee Brothers, glassware, t-shirts and novelties. Distillery fans will also enjoy dinner and cocktails at the Cooperstown Beverage Exchange, the distillery’s own craft kitchen and bar located on right on Main Street, in the heart of Cooperstown.