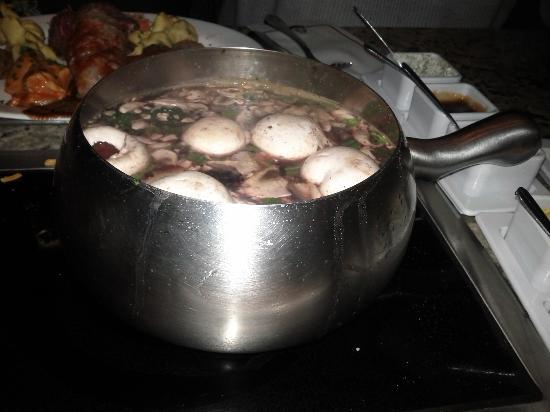 “Petite is a niche variety perfectly matched for this cuisine,” stated Goldstein at the 10th Annual Petite Sirah Symposium. Concannon Vineyard, a world leader of Petite Sirah, hosts this annual event. Each year it’s designed to educate winemakers on how best to craft their Petite Sirahs and to also offer ways to entice chefs and consumers to become fans of this intriguing wine.

What better way to do this than to bring in someone with Joyce Goldstein’s credentials. A consultant to the restaurant and food industries, Joyce’s areas of expertise are recipe development, menu design, and staff training. She improves existing recipes, adds new ones to complement the menu, and works with a culinary staff to refine flavors and successful execution.

“Petite is ‘the’ consummate wine match for these new recipes,” was heard over and over again… Food, food, food… Flavor, flavor, flavor… Petite, Petite, Petite. “All the flavors that are in these dishes are the same exact flavors that describe your wines.” Hitch your pony to this star, was Goldstein’s basic assessment, and you’ll be well on your way. “Petite Sirah is not shy,” she explained. It has a lot of bigger and fruitier flavors, and she noticed some smoke with it. “I love to play with foods that have some smoky elements.” The clues, according to Goldstein, are for winemakers to look for these same spices in their wines that are also in food dishes with the same components; like clove, peppercorn, ginger, five spice powder, cumin, cocoa, currants, and cinnamon. The flavors that are in Petite Sirah are also in these melting pot dishes. She offered a plethora of dishes, while winemakers wrote feverishly.

Melting pot cooking is a craze that’s borne from multicultural diversity. It’s a phenomenon from a new generation of chefs who are experimenting with their families’ traditional recipes, and playing with flavors that are fun and creative by introducing alternative, ethnic twists. “Korean Beef Tacos are a great example,” stated Goldstein, at the symposium.

Another example of melting pot cooking is Concannon Vineyard’s Petite Sirah paired with a Cuban beef stew – Ropa Vieja – with California fusion. Petite Sirah braised flank steak with ground cumin and peppercorns among other spices and tasty ingredients, meld together perfectly with tomato sauce and beef broth in a slow cooker. (Full recipe available on www.ConcannonVineyard.com).

Winemakers learned that multiculturalism has become so dominant today that we’re seeing recipes pop up which we’d never expect to see. And, they’re all just begging for a wine that’s so completely diverse. What could be better than an immigrant wine that’s also multicultural: Persian derivation, European cross-fertilization (Syrah and Peloursin), and an American transplant?

This parallel is a perfect voyage describing not only Melting Pot Cooking, but also Petite Sirah. Joyce Goldstein’s message was “claim it and you’ll own it.”