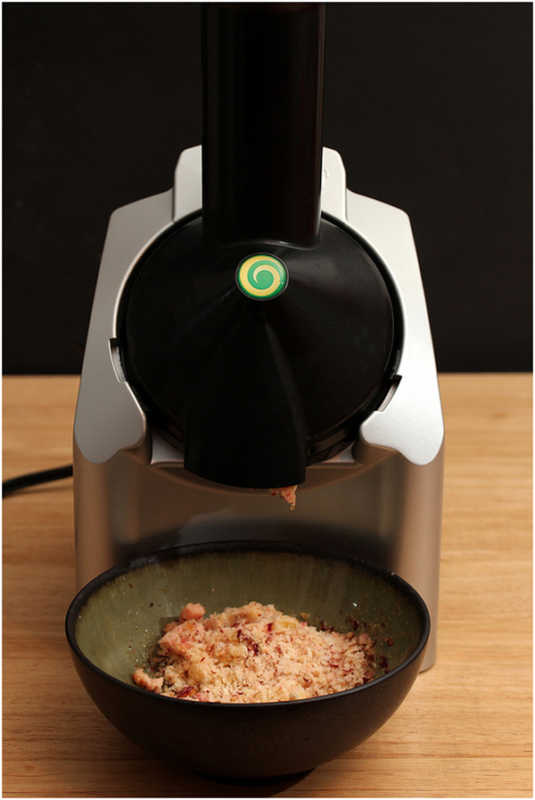 This Thing is Yonanas: Test and Review of Dole’s Banana Dessert Maker

by Vanessa Pastore
Frozen banana ice cream took the internet by storm a while ago. After all, who could resist the allure of a one ingredient, healthy AND indulgent dessert? There were so many possibilities, so easily achieved with mix-ins; from the healthy addition of fruit, to the more decadent chocolate/nut butters. I fell head over heels for... Read More

This Is How The World Ends…

Frozen banana ice cream took the internet by storm a while ago. After all, who could resist the allure of a one ingredient, healthy AND indulgent dessert? There were so many possibilities, so easily achieved with mix-ins; from the healthy addition of fruit, to the more decadent chocolate/nut butters. I fell head over heels for this craze, and am not ashamed to admit it. I thought nothing of peeling my ripe bananas (which are a rare find to have extra in my household), and  freezing them whole for a rainy day.

Why not slice then freeze, you ask? The slices like to adhere to one another and become unyielding, monstrous blocks that won’t relent, and I simply don’t have time for that noise.  When the need for a treat arose, I’d thaw them slightly, slice them in to rounds, and unleash my food processor upon them in a virtuous wrath. It hits this magical point where the texture completely changes from a gluey mess to a light, frothy, whipped consistency that I never knew was possible, thanks to our friend, Pectin. I am a huge fan of adding cinnamon and almond or peanut butter into the processor work bowl as it’s running, for a thorough incorporation. This became a weekly occurrence, and often premiered as breakfast.

You can imagine my delight when I learned that I was receiving a machine to test by a company who deals in bananas, made *explicitly* for this purpose! No more slicing, easy cleanup: a simpler thing made even simpler! 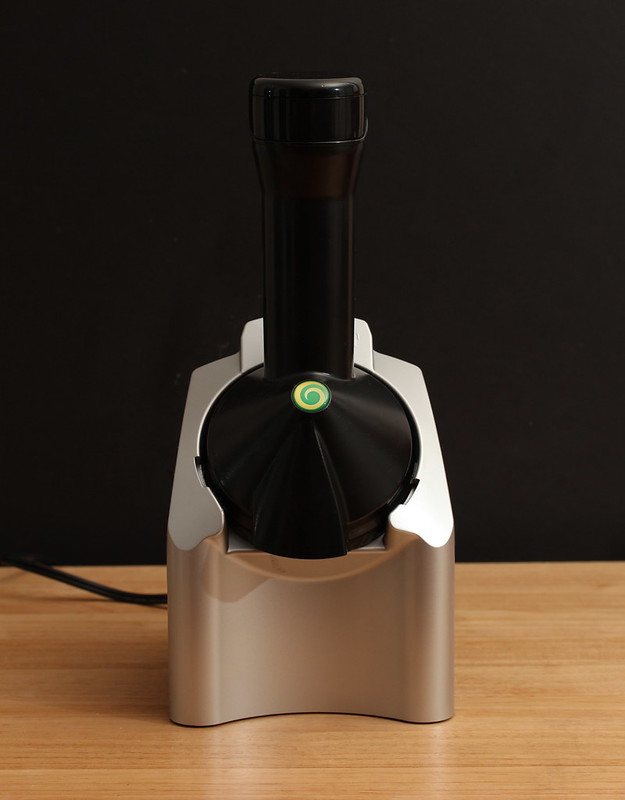 I was more than excited. Bananas waiting, slightly thawed as directions suggest, and bowl at the ready, I went in for the kill. One banana down, I had a few drops of output in my bowl.

Hm, no bother- Another! I got three bananas in before I had modest serving size. I stopped the machine to investigate. It was running properly, no issues there. The bananas were in fact, disappearing, so they were feeding into something- but certainly not my bowl. Was I not pushing hard enough?

I used the plunger to shove the bananas into the device, and even with the two-years-of-swimming-every-morning buffness that my arms boast, that wasn’t as easy a task as one might think. I opened the machine and looked at the blade assembly, and lo, at least a banana and a half worth of ‘ice cream’ clung to it, and even more simply clogging the chute. I understand that to some degree, you help yourself here and scoop out this excess, but half of my bananas seemed a little much. Want to add peanut butter into this ice cream? Get ready for an even bigger clog (that was my second attempt).

This is what is interesting to me. Here you have a machine, made explicitly for this one purpose, you would think that you’d make it efficient. When I look at this machine, I feel like a disappointed parent: You had one job. Never mind that the blade assembly looks like something out of HellRaiser, what I can’t get over is the design of this machine. The more I look at it, the more annoyed I get. What occurs to me here is, this product is made by Dole. It just so happens that Dole produce supplies many bananas. Their Facebook page alone boasts 737K likes! If every one of their fans bought one bunch a week- well, you get where this is going. (Also, why do bananas have a brand specific Facebook page, and what is this world coming to?)

The more bananas you buy for this infernal machine (that was made by the people selling said bananas), the more I hear Scrooge McDuck swimming in his money bin.  I have to say, ordinarily,  I don’t write negative reviews. I am a nice person. This machine, however, left me  was so dissatisfied that I didn’t even take pictures of the results. I now regret this, but I will also say that I certainly won’t waste my remaining banana stash on this beast. You can see the waste I refer to with the other two tests I performed.  Normally, if the product doesn’t match expectation, or is just plain bad, I try to look at the positives, or say nothing at all. As you’ll see below, I tried to look for positives. I really did. When multiple requests for feedback came through, even months later, this review was drafted.

Now, after this, I would think I’m not alone in this  opinion. This machine retails at $50 on Amazon, and has 698 customer reviews. What shocked me the most is: 49 of those are 1 star and a whopping 433 are 5 star. My faith in humanity will only be restored when I learn that at least 400 of those 5 star reviewers are Dole employees. How many reviews mention the gratuitous waste of product? Only a handful. I am actually amazed, and stand by my employee-boosting theory.

Figuring I must have missed something in my initial tests, I go in for a second round. This time, I use frozen nectarines, for a sort of granita/ice shavings end product. Here we have approximately 3 nectarines.

At first glance, it doesn’t look so bad. The texture is what I expected, the amount seems a little light though. This is where the machine naturally finished, no more fruit would come from the chute. Here is what the inside assembly looks like: 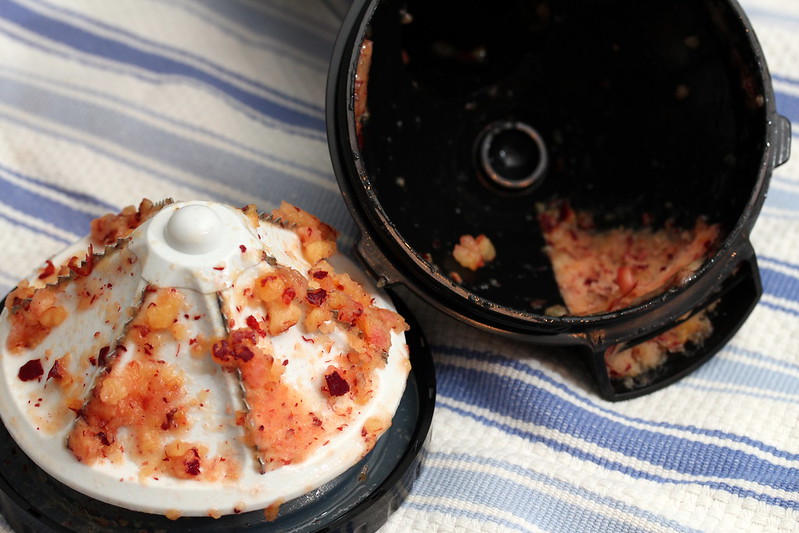 Nectarines have a low pectin content. They are naturally less gluey, especially less so than bananas. This wasted amount is in fact far less than the resulting waste of frozen bananas. However, here the chute is completely stopped, and the blades themselves are fairly clogged as well. This test worked marginally better, be we are still looking at substantial waste.

I decided on a third test, as I said I don’t like to give up on a product. It’s apple season, I wonder if this thing will juice fresh fruits, perhaps even yield a chunky, cider-like juice? Well… 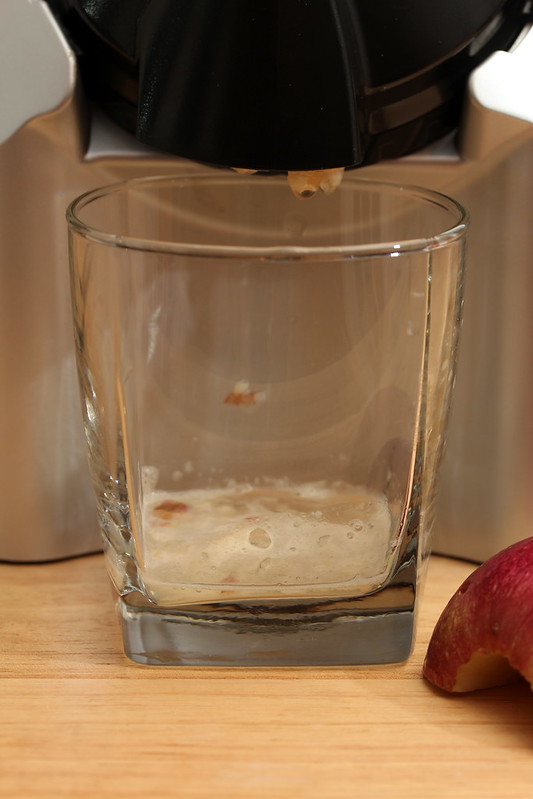 I worked in a juice bar, I know how much should come of an apple; this isn’t it.  How much waste is there with fresh (not frozen) fruit? 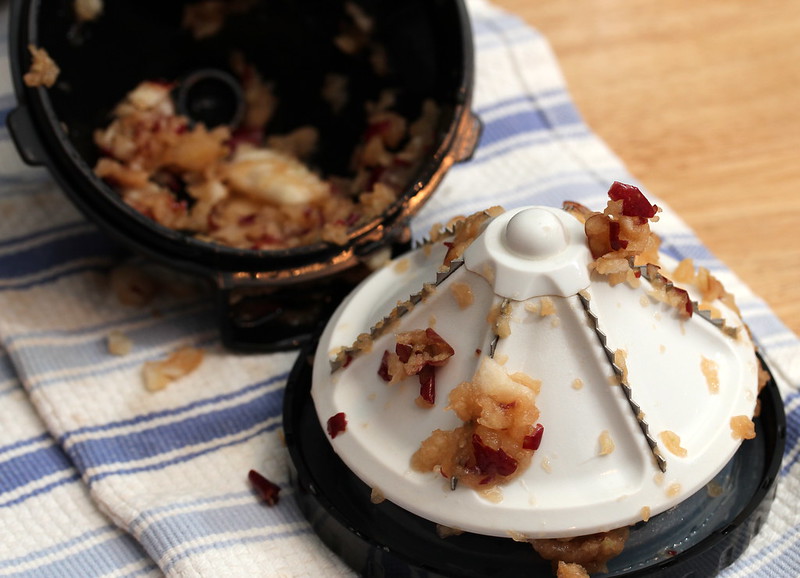 Less clung to the blades, but the chute was completely blocked here, and it looks like the entirety of the apple took up residence there.

Suffice to say, my food processor does a fantastic job of whipping up banana ice cream in minutes, with far less noise, and little to no physical effort. Not to mention that my food processor has about the same counter space footprint, and does a multitude of other things, which this simply does not do.

Yonanas, I’m not mad. I’m just disappointed. Granted, I’m not mad because I didn’t pay for you. If I had, I would certainly be extremely bent out of shape.

Concept: Awesome, if it worked properly.

Test Result: Not worth the money if they keep the design as is.

Vanessa Pastore
Vanessa is a professional baker and blogger, regularly documenting her fight for all things vegan at Hungryface Bakery. She spends every waking moment, as well as everything in between, thinking about food. She can be found in international markets, or harvesting ingredients from her backyard. Nothing is sacred, and nothing is safe. If you'd like your brand, event, or business considered for an editorial or upcoming feature, contact us
View All Posts by Author
Visit Author Website 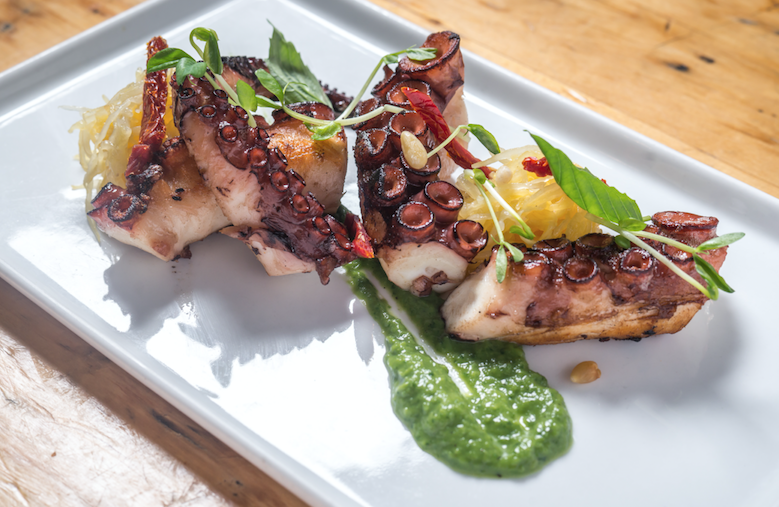 How to Cook Octopus: Local 92’s Spanish Octopus With Spaghetti Squash and Leek Emulsion
Fall is Here, So Enjoy Some Pumpkin Beer! 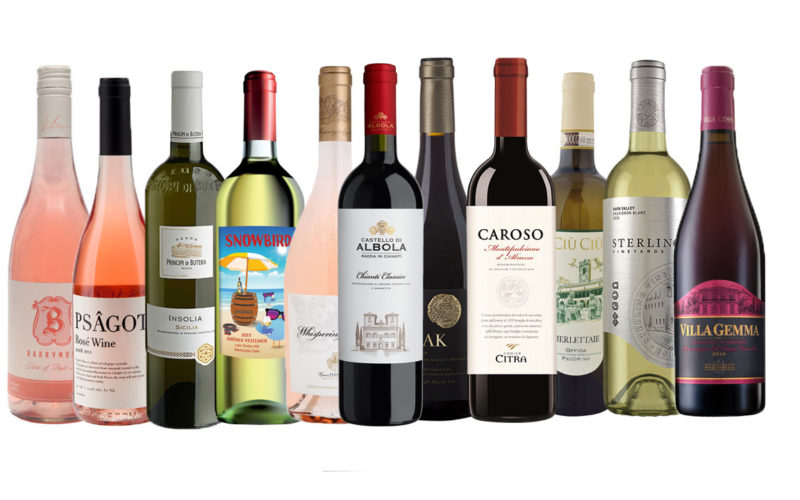 What to Drink Now: Thirteen Wines For Summer Sipping
1 Comment