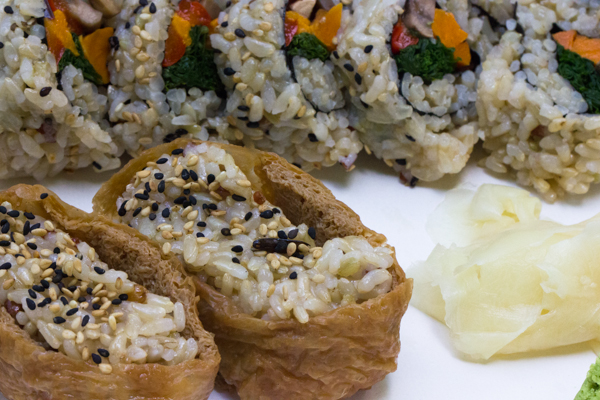 by Jessica Tupper
Sometimes you’re craving something nutritious, but everywhere downtown is fast food-focused or heavy. So when I was invited to visit Box Nature Sushi and try Taka Kuno’s value-priced, healthy rolls I was excited and more than a bit curious. Unlike going to Shiro’s or Wasabi, Box Nature is low on ambience. And it has to... Read More Sometimes you’re craving something nutritious, but everywhere downtown is fast food-focused or heavy. So when I was invited to visit Box Nature Sushi and try Taka Kuno’s value-priced, healthy rolls I was excited and more than a bit curious. Unlike going to Shiro’s or Wasabi, Box Nature is low on ambience. And it has to be: you’re ordering from a truck on the side of the road. That being said, when we went to order at the 2nd and Pike location, it was conveniently across the street from Benaroya Hall and the lovely park space.

On to the menu. It’s beautifully simple: all the rolls are five pieces per order, and split into two types at set prices, veggie ($3.50/each) and seafood ($4.25). Each category has a pretty heavy hit list of new and old favorites, from leafy to wild salmon, which you can order with traditional white rice or multigrain rice. Going to the sides, they stick to the essentials – a few salads, classics like miso soup and seaweed salad, and a frozen yuzu cream pie. This is not a bad thing. It means deliciousness is afoot. The rolls were a great value, with some delicious surprises. The Leafy, with kale, local greens, asparagus, and plum sauce, was a deceptively filling form of a salad in a roll. The seared albacore was fresh and nicely briney, with some crisp contrast from the greens and cucumber, and the spicy tuna had a kick but wasn’t overpowering. I wasn’t as sold on the Roasted Veggie, but I don’t normally like roasted red bell peppers with shiitake mushrooms and kale. I’d recommend adding Taka’s super thick soy sauce to all of the rolls, which gave the salty hit I craved on the Leafy and balanced out the flavors in the seared albacore.

Of everything, I was most impressed by the inari ($3.50/two pieces). These beautiful fried bean curd pockets stuffed with rice were comfort on a plate, with soft, chewy skins that put what most sushi places serve to shame. We also got to try both types of miso soup, a regular miso and a seasonal soymilk miso that will be available in October. The true genius of Taka’s soup is hidden in the fried soft tofu, bringing bouncy bites of texture to a usually smooth soup. I love that they’re also rich with seaweed and sweet potato, but it’s a very mild miso base for those who like their soup a bit more intensely umami.

The only thing I wasn’t really interested in was the yuzu pie, which had a marshmallow-soft filling but it needed more of that wonderful, tart citrus.

And there’s one last bonus: Taka, the head chef and owner, is committed to using sustainable seafood. Taka also mentioned he’s working on a vegan miso, since the dashi stock for miso uses fish, and other ways to cater to the growing vegetarian scene in Seattle. With great prices, sake-nomi parties on Thursdays, and more wonderful food in the works, you have to check out Box Nature Sushi for one of the healthiest, fastest meals in downtown Seattle.