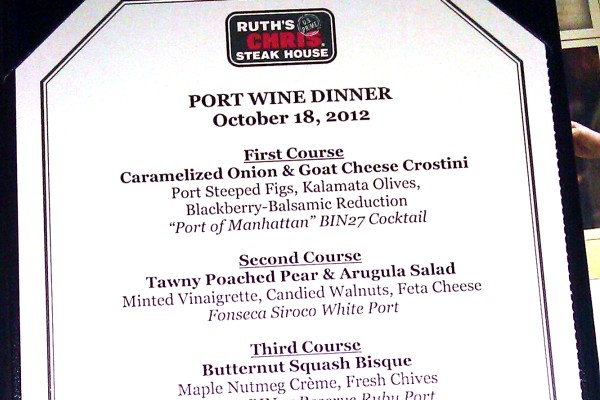 by Editor
On October 18th, 2012, I had the opportunity once again to dine with Ruth’s Chris Steak House at their corporate training location in Orlando, Florida, for another version of their monthly food and wine pairing dinners. This month was rather unique, as port wines from Taylor Fladgate, and Fonseca BIN 27 were the primary focus.... Read More On October 18th, 2012, I had the opportunity once again to dine with Ruth’s Chris Steak House at their corporate training location in Orlando, Florida, for another version of their monthly food and wine pairing dinners.

This month was rather unique, as port wines from Taylor Fladgate, and Fonseca BIN 27 were the primary focus.

Seated in a room of approximately 27 guests, Missi Holle, National Account Manager for Kobrand Fine Wine & Spirits, led us with an introduction to port.

Although generally associated with Portugal, Port owes at least a portion of its invention to England. Missi went on to explain that, as a result of ongoing arguements with France, by the late 17th century, the English had boycotted French wine. The challenge was in finding an effective way to transport wines from other regions. back to England.  Travel from long distances had to go by ship, and spoilage was a concern. However, the British discovered that, if they fortified with wine, either with brandy or a similar spirit, it would last on its journey from Portugal, and eventually make its way safely to England. This fortification process also gave the wine a higher alcohol content, and a considerably sweeter taste on the palate. In 1692, the first British port house was established, officially introducing port to the world.

We’d like to wish a sincere congratulations to our Crave Local contest winners, who got to take home a bottle of Fonseca BIN 27 port, as well as dinner for two, and a pair of stemware from Villeroy and Boch.  Be sure to sign up for our newsletter to find out about new wine dinners and contests in your city! Our first course was a well-prepared Caramelized Onion & Goat Cheese Crostini with Port Steeped Figs, Kalamata Olives, Blackberry-Balsamic Reduction. The crostini was perfectly crisped on the exterior, with just a bit of chew to the toast on first bite. The figs complemented the goat cheese nicely, and the drizzle of balsamic on the plate make for a nice, tart contrast to the “Port of Manhattan” BIN 27 Cocktail, served in a chilled martini glass, and made from Maker’s Mark Bourbon, Fonseca BIN 27 port, and simple syrup. I would have liked to see some sort of citrus addition to the cocktail, like a fresh orange peel swirled around the rim to release essential oils, but it was good as it was, and a potent start to the evening.

Our second course was a Tawny Poached Pear & Arugula Salad with Minted Vinaigrette, Candied Walnuts and Feta Cheese. Although beautifully presented, and I’m always a fan of arugula, the mint was lost in the vinaigrette.

As a fan of herbs and lettuces, I wish the salads at Ruth’s Chris were a bit less dressed, so that each flavor could shine through more.

The salad was paired with Fonseca Siroco White Port, a gorgeous, pale blonde color with hints of stone fruits, gentle oakiness, and a nice, bright, creamy feel on the palate. My dinner guests commented that is had similar characteristics to a chardonnay-I would agree. As an introductory port, this was a definite hit.

The third course was a Butternut Squash Bisque, paired with Fonseca BIN 27 Reserve’s Ruby Port. This was a delicious soup, with a rich, savory notes from the soup, and a cool, creamy contrast with the maple nutmeg crème. Tiny sprigs of chives topped it off. The ruby port was an excellent pairing, drawing out the sweet, earthiness of the squash.

Our next course was the Filet Mignon with a Trio of Shellfish. I had ordered my steak medium rare, and it arrived at the table, seasoned (perfectly, I might add) with black pepper and salt, sizzling hot, and surrounded by one half of a roasted cold water lobster tail, three large shrimp, and a bay scallop. I would have preferred that the accompanying butter had been clarified and unsalted, but, sans that portion of the dish, it was an excellent entrée. House made garlic mashed potatoes and creamed spinach were the sides, served family style to our group.

The stand out at this portion of the dinner was actually a bit of a battle, as Sequioa Grove’s Cabernet Sauvignon 2009 was the paired wine, and only still for the evening. With hints of menthol, oak, and Madagascar vanilla on the palate, as well as roasted coffee and dark chocolate, this wine was juicy, full-bodied and delicious – a perfect match for the filet. I saved a bit to try with dessert, and was not disappointed there, as well. A raffle was done at this portion of the evening, with winners receiving a bottle of Taylor Fladgate 20 year old tawny port, and a box of Jacques Torres chocolates. Needless to say, ‘Mr. Chocolate’ was probably the most swooned after raffle prize we’ve seen in a while, and the winner was very pleased to go home with such a delectable treat.

Our final and fifth course of the evening was an array of Artisanal Cheeses, Fresh Berries, Nuts and a single, dainty piece of Jacques Torres BIN 27 Infused Chocolate, paired with Taylor Fladgate 20 Year Old Tawny and Taylor Fladgate Vargellas Vintage 2004.

The Stilton blue cheese was a perfect match for the Vargellas Vintage port, and we thoroughly enjoyed the dark chocolate with it, as well. It has an intense profile of blackberry and dark plum fruits, with beautiful legs on each swirl.  Tiny, fresh raspberries and blueberries brought out the jam notes of the tawny port, and the walnuts and Marcona almonds were foiled with it well.

At the end, we left satisfied, educated, and curious to explore the world of port just a bit further.

If you’d like to win a pair of tickets to an upcoming wine event event in your area, sign up for our newsletter, and be the first to know about great local restaurants and giveaways near you.

For more information on upcoming Ruth’s Chris wine dinners, either subscribe to our newsletter, or go to their website at www.ruthschris.com.