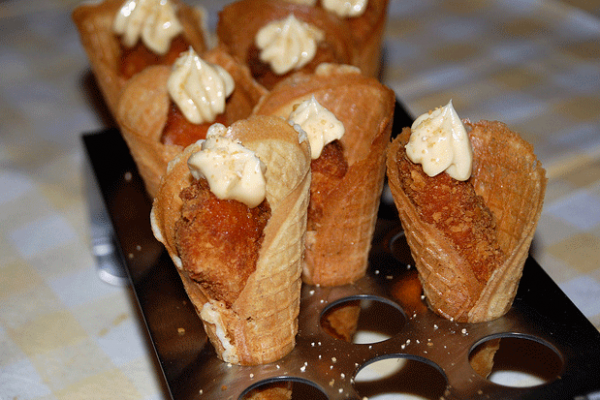 by Crave Editorial Team
Could fried chicken in its many forms-Southern, Korean, buttermilk battered, doused in a Thai chili garlic glaze, or even served in a waffle cone-be the next big trend in food? Elizabeth Karmel, executive chef of New York City’s Hill Country Chicken, can’t be sure, but she feels it’s a sign that the Food Network New... Read More Could fried chicken in its many forms-Southern, Korean, buttermilk battered, doused in a Thai chili garlic glaze, or even served in a waffle cone-be the next big trend in food?

Food-festival events have become trend-setters in the culinary world by taking “an iconic food group and turning it into a fabulous celebration,” says Ms. Karmel. Many vendors will bring with them their produce proudly to share with the public. Some may have a use for mobile refrigeration trailers, built by Cold storage experts, with which they keep their food fresh for the festivals.

Beyond New York, other festivals are putting a spotlight on such foodie trends as gluten-free dining (a special pavilion at Chicago Gourmet), nose-to-tail eating (the All-Star Cochon in Las Vegas) and creative sandwich-making (the Sandwich Invitational at Oregon’s Portland Feast). Festivals can also help redefine a cuisine; the Atlanta Food & Wine Festival highlights other “Southern” cultures, such as South Indian, that are now influencing the food of the American South, with dishes such as cardamom-spiced fried chicken.

“I think festival events are able to tap into the zeitgest by presenting a curated experience that brings a trend to life,” says Caryl P. Chinn, a Los Angeles-based culinary consultant who works with festivals on programming.

Food festivals are also increasingly playing a role as showcases for new products. At the Food Network New York City Wine & Food Festival, for example, Lifeway Foods is launching pumpkin, chocolate and dulce de leche-flavored varieties of frozen kefir, a yogurt-like treat. At the most recent food & wine event in Aspen, Onehope Wine, a label that channels half of its profits to a variety of causes, got enough buzz that a number of chefs who attended now offer the wine at their restaurants, according to Jake Kloberdanz, the label’s chief executive.

But the biggest buzz has been reserved for themed events, such as the ones at the New York food festival. At the Shake & Bake, patrons who pay the $145 admission (on par for such events) can chow down on traditional Southern-style buttermilk fried chicken, courtesy of New York chef John Mooney. Or they can sample a fried chicken thigh “burger” from California cuisine pioneer Jonathan Waxman or Korean fried chicken tacos from restaurateur Richard Sandoval. Not to mention two versions of chicken-in-a-waffle cone, the other from Brooklyn Star’s Joaquin Baca.

“Nobody doesn’t like fried chicken,” says Lee Schrager, the organizer of the festival, as well as the 11-year-old Food Network South Beach Wine & Food Festival. Mr. Schrager creates these multi-day affairs as part of his promotional duties as vice president for Southern Wine and Spirits, a leading distributor.

Mr. Schrager has a knack for homing in on an idea; “he can literally smell a food trend hot out of the kitchen,” says Ms. Karmel, whose restaurant serves more traditional fried chicken, rather than the waffle-cone version she features at festivals. Given that festival events attract a relatively small audience-it’s a rare affair that can accommodate more than a few hundred people-how does the trend go from the festival tent to the broader public? Those who participate in and track the festivals say it’s all about the buzz that’s created.

At many of Mr. Schrager’s thematic events, patrons vote on their favorite dish-and the attention lavished on the winner is significant, culinary pros say. The New York-based Shake Shack chain had just two locations in the city when it took home top honors at the 2007 Burger Bash in South Beach. (The burger event was later incorporated into the New York festival as well.) “That moment solidified us as a leader of the ‘better burger’ movement,” says Randy Garutti, chief executive of the chain, which now encompasses 17 locations spread among several cities.

Influential foodies talk up the dishes they’ve tried. Mr. Garutti says he got a boost at a more recent South Beach Burger Bash when Dana Cowin, editor in chief of Food & Wine magazine, sent out a complimentary tweet after trying a new Shake Shack bacon-topped burger.

Another factor: Chefs in attendance find new ideas. Mr. Schrager says it’s no coincidence that more high-end burger joints opened after his first Burger Bash. Other food festivals jump in, too. Chicago Gourmet, organizer of the city’s “Hamburger Hop,” says it was inspired by the Burger Bashes.

What’s next for fried chicken? Mr. Schrager says it is becoming an interesting platform for sauces, such as a soy-sorghum dip or a black pepper-flavored honey.

All his festival events come down to the same thing, Mr. Schrager says. “It’s comfort food on steroids.”

Food Festivals That Have (and May Soon) Create Trends

Here are some festival events helping to set trends in motion.

The concept: The “better burger,” made with high-end ingredients and prepared with foodie flair, right down to the condiments (as in a charcuterie-topped burger) and side dishes.

The concept: That’s not just a spicy meatball; it’s also a forum for culinary creativity-think balls made from rabbit and goat meat, among other offerings.

The concept: The taco gone global- with culinary influences ranging from Jewish-American (the pastrami salmon taco) to Asian (the Peking duck taco).

The concept: The sandwich writ large-with all sorts of fillings, all sorts of bread. The winner at the inaugural event: a maple-glazed pork belly sandwich.