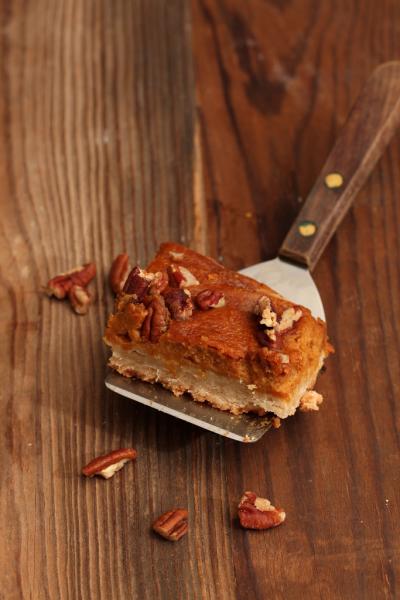 by Vanessa Pastore
Thanksgiving looms in the future; a time for food, family, and most importantly, pie. Sure, maybe your priorities have a different shift to them, but pie is in there in some regard, I hope.  Pumpkin pie may be the old standby for Thanksgiving, but there are tons of recipes and new variations out there for... Read More

Thanksgiving looms in the future; a time for food, family, and most importantly, pie. Sure, maybe your priorities have a different shift to them, but pie is in there in some regard, I hope.  Pumpkin pie may be the old standby for Thanksgiving, but there are tons of recipes and new variations out there for those who want to try something new, but remain faithful to tradition in some way.

I recently tested the line from Rave Review Spirits, which included my favorite of all libations, Bourbon. Rave Review makes liquors for explicitly for cooking. Their ingredients are all natural and each spirit is heat stable, has no alcohol bite, and low in sugar.  So the flavor really comes through in what you’re making, from sweet to savory, heat or no! After taste testing everything for what might work, I finally decided on bourbon caramelized pumpkin pie bars, which is both a mouthful to say, as well as a mouthful to eat. It’s decadent, it’s rich, and just a touch boozy; and by the time Uncle Bob launches in to his 5th telling of that old fish story, isn’t that exactly what you need?
To prep for your filling, soak 1 cup of raw cashews in enough water to cover for at least 2-3 hours, or until they yield to squeezing.

Let’s start with the Shortbread Layer.

Preheat your oven to 325° F and line a 13 x 9 pan with parchment paper. In a small bowl, thoroughly mix the flour, cinnamon, baking powder, and salt. In a large bowl, add your sugar, melted coconut oil, extract, coconut milk, and bourbon. Add your dry to your wet, and mix until just combined. Roll up your sleeves, and use your hands, because it’s more satisfying that way. Press into your prepared pan to form a somewhat thin, even layer along the bottom. Channeling your best Norman Bates, prick (or stab) the dough with a fork and par-bake for 10 minutes. While that’s going, let’s get to the Caramelized Pumpkin Pie with Bourbon layer:

Did you turn your oven up to 350° F? If not, get on that. Throw your pumpkin, maple syrup, brown sugar, coconut oil, salt, and spices in a non-stick sauce pan, and cook gently over medium-low heat for about 10-15 minutes, or until darker, thoroughly combined, and lovely smelling. Drain your cashews and blend in a food processor until smooth. Add the pseudo-cream cheese and blend until that’s smooth, too. Cool your filling a little bit, and add your bourbon, or if you’re like me, live dangerously and put it in your food processor – just be sure to leave the center cap off, so it can vent! If you shut up all that steam in a closed food processor or blender, you’ll regret it, 1st degree burn style. Not that I speak from experience, or anything. That said, blend this until it is as smooth as it can be. Leave it running and do some dishes, just be sure to scrape down the sides every now and again so that everything is consistent.

Pour the filling over your shortbread layer, smooth it out until it’s even, and top with pecans. Bake for 40-45 minutes, or until your house smells the way it rightfully should on Thanksgiving. Thanks to the cashews, the texture is smooth and creamy, setting into a nice custard. The shortbread remains crisp and stands up to the filling. The bourbon isn’t overwhelming, and lends a distinctly pleasant, boozy note to the caramelized pumpkin, thereby bracing you quite nicely for an evening with family, or a long food-coma induced nap. Vanessa Pastore
Vanessa is a professional baker and blogger, regularly documenting her fight for all things vegan at Hungryface Bakery. She spends every waking moment, as well as everything in between, thinking about food. She can be found in international markets, or harvesting ingredients from her backyard. Nothing is sacred, and nothing is safe. If you'd like your brand, event, or business considered for an editorial or upcoming feature, contact us
View All Posts by Author
Visit Author Website