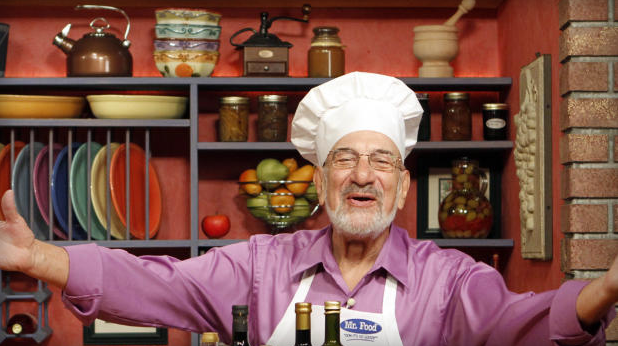 by CL Editor
Art Ginsburg, the delightfully dorky television chef known as Mr. Food, died at his home in Weston, Fla., Wednesday following a struggle with pancreatic cancer. He was 81. Ginsburg – who enticed viewers for decades with a can-do focus on easy weeknight cooking and the tagline “Ooh! It’s so good!” – was diagnosed just over... Read More

Art Ginsburg, the delightfully dorky television chef known as Mr. Food, died at his home in Weston, Fla., Wednesday following a struggle with pancreatic cancer. He was 81.

Ginsburg – who enticed viewers for decades with a can-do focus on easy weeknight cooking and the tagline “Ooh! It’s so good!” – was diagnosed just over a year ago. The cancer had gone into remission following early treatments and surgery, but returned earlier this month.

“Art’s commitment to anyone-can-do recipes and passion for helping others made him well-loved among his peers and among television viewers and website visitors. He was one of the first television celebrity chefs and paved a road for many who came after him,” a note on his website explained. “His greatest love was for his wife, Ethel, and his family. Our hearts go out to them and to all who were touched by his daily visit into your homes via the television.”

Ginsburg had an unlikely formula for success in this era of reality cooking shows, flashy chefs and artisanal foods. With a pleasantly goofy, grandfatherly manner and a willingness to embrace processed foods, Ginsburg endeared himself to millions of home cooks via 90-second segments syndicated to 125 local television stations around the country.

And though he published 52 Mr. Food-related cookbooks, selling more than 8 million copies, he was little known to the nation’s foodies and mostly ignored by the glossy magazines. That was the way he liked it.

“They’re on the Food Network. They’re getting a lot of national publicity. And they’re getting big money,” he said of fellow food celebrities during a 2010 interview with The Associated Press. “I was always the hometown guy. I don’t want to be the super celebrity. When you need bodyguards, that’s not my deal.”

Ginsburg grew up in the meat business, and eventually started his own catering company. He made his television debut in 1975 in upstate New York on a local morning program. His Mr. Food vignettes were syndicated in nine television markets by 1980. His popularity peaked in 2007, when he was appearing on 168 stations.

He also was generous with the enviably broad reach of his culinary pulpit, frequently inviting up-and-coming celebrities to do guest appearances with him.

“Art Ginsberg was a warm, gregarious man who knew food is more about love and sharing than a fancy ingredient list,” said Rachael Ray, whom Ginsburg invited on air long before she was a huge celebrity. “He was a supportive and loyal friend and I’ll miss his smile and warm hugs. This Thanksgiving I’m thankful I knew him.”

In recent years, Ginsburg eased his involvement in the day-to-day operations of the company he founded, Ginsburg Enterprises Incorporated, which produces the television segments and oversees his many other ventures, including a line of housewares. The company also produced television segments that did not star Ginsburg, billing them as the “Mr. Food Test Kitchen.”

It plans to continue producing and syndicating those segments.