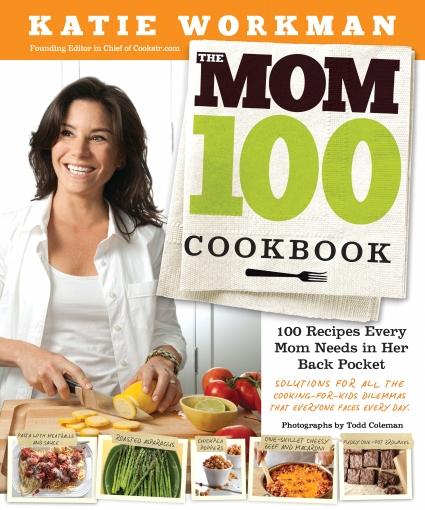 by Crave Editorial Team
Most of us, and especially parents, have limited time and resources to create wholesome, delicious meals that the entire family will actually eat. In her book, the The Mom 100 Cookbook: 100 Recipes Every Mom Needs in Her Back Pocket, Katie Workman shares her kid tested and approved recipes that will help you steer clear... Read More

Most of us, and especially parents, have limited time and resources to create wholesome, delicious meals that the entire family will actually eat.

In her book, the The Mom 100 Cookbook: 100 Recipes Every Mom Needs in Her Back Pocket

, Katie Workman shares her kid tested and approved recipes that will help you steer clear of the frozen food section and avoid the lure of the ‘chicken nugget’ drive-through.

As the founding editor of Cookstr.com, and a mother of two, Katie uses straightforward approaches to tackling everyday cooking dilemmas. With creative twists on traditional favorites, she shows moms and dads how to make meals the adults will actually want to eat (see the Fork in the Road sections

), and help to expand the palate of your picky, white food only, say-no-to-veggies, salty potato chip obsessed child (or spouse).

This past week, we decided to put a couple of these recipes to the test, when we had a family of rather picky eaters over for Sunday dinner.

When ‘comfort food’ is associated with junior cheese burgers and deep fried mashed potato bowls, meal planning can be an uphill battle. Since cheese was the common denominator, we took a poll, and the vote came in for quesadillas (and a dessert).

We we went with a fajita seasoned chicken and Monterey Jack cheese for the kids, and adults got to add sauteed sweet red peppers, Vidalia onions, and baby portobella mushrooms. 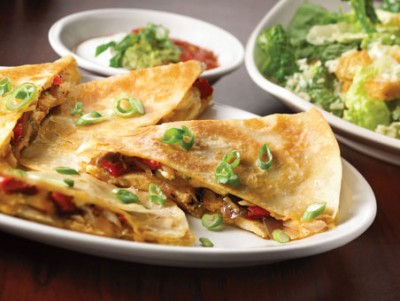 Preheat the broiler. Grease a baking sheet.  Toss the chicken with the fajita seasoning, then transfer them into a pan with a bit of olive oil.  Sauté approximately 5 minutes on medium, just till the chicken starts to brown, and is thoroughly cooked, but not dry.

Preheat oven to 350 degrees F (175 degrees C).  Heat the oil in a large saucepan over medium heat. Stir in the green bell peppers, red bell peppers, onion, and chicken. Cook and stir until the vegetables have slightly charred and softened, about 10 minutes.

Layer half of each tortilla with the chicken and vegetable mixture, then sprinkle with the Monterey jack cheese. Fold the tortillas in half and place onto a baking sheet.

Bake quesadillas in the preheated oven until the cheeses have melted, approximately 10 minutes.

To serve, top quesadillas with low fat sour cream for the kids, or you can add sliced jalapenos, salsa, avocado, and cilantro for the adults.

For dessert, we decided to try our hand with Katie’s Apple Coffee Cake recipe

. Similar to the Jewish apple cakes I grew up with, this simple cake was redolent with spice, quick, and tasty. 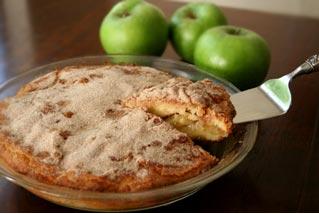 For the Cinnamon Sugar Topping

For the Coffee Cake

Make the cinnamon sugar topping by mixing together the granulated sugar and cinnamon. Set aside.

Preheat the oven to 375 F.  Grease a 9-inch square or round baking pan.

Place the flour, baking, powder and salt in a small bowl and whisk to mix. Set aside.

Place the sugar and butter in a medium sized bowl and using an electric mixer beat them until fluffy (appx 3 minutes).

Add the eggs one at a time, and then add the vanilla. Add the flour mixture and the milk alternatively in about 2 batches of each, beating gently after each addition until almost incorporated. At the end you still want to see streaks of flour and milk.

Using a wooden spoon, fold in the apple until everything is just combined. Spoon the cinnamon sugar topping over the top.

Bake the coffee cake until golden brown and a toothpick inserted in the middle comes out clean, about 30 minutes.

Let the cake cool in the pan on a wire rack.  Serve the coffee cake warm or at room temperature, and enjoy!

Katie’s recipes are great, because they allow for interpretation.This book is chock full of trick and tips for opening up little ones’ taste buds, and explanations on things like some of us either do or don’t like cilantro (it’s genetic).

For less than $15 on Amazon, The Mom 100 Cookbook can be a real lifesaver for fast, family friendly meal planning. Whether you have kids, or just occasionally entertain them, this book is a go-to resource that every one should have in their kitchen library.