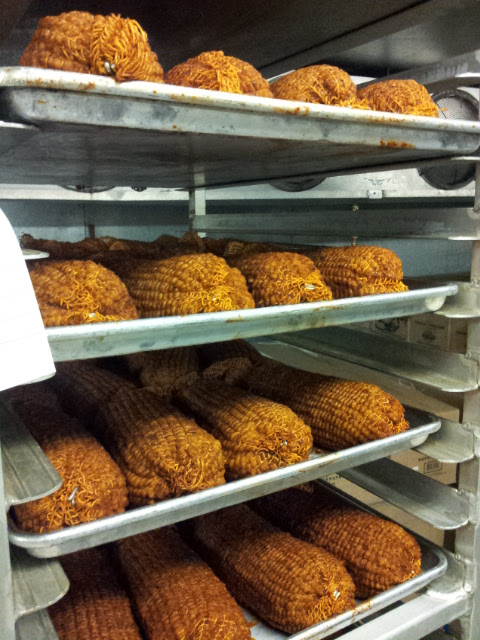 Field Roast, based in Seattle, makes amazing vegetarian sausage and vegetarian meat products and is run in a century old facility that was previously a dairy processing facility. While their first customer was PCC Natural Markets, you can now find their products at Costco and even Safeco Field for Mariners games.

The place is built on a mission of nice. The president, David Lee, lives nearby, and is proud to “stay in the community that [they’re] close to.” They have a framed collage of photos in the entryway sent in by customers, or ‘Field Roast in the Field.’ They even make awesome corn dogs on site.

Their products range from the new frankfurters to Hazelnut Cranberry Roast En Croute, a holiday specialty. They now also have a line for restaurants, such as white truffle pate and breaded cutlets.

David was kind enough to give me a factory tour and interview.

David Lee: It’s a small plant, but we have 50 people working here, so there’s a lot going on. Typically what we do is pretty simple. You can see the dough, this is the most processed thing that we make, but, y’know, [they’re] frankfurters. The franks have fresh garlic, onion, tomatoes – and they’re fatty. We’re all about mouthfeel and flavor here, we’re not a nutritionally based company, which is kind of unique to the industry, a lot of companies market their products on basis of the nutrition. To describe our basic process, we make a dough, and then we form it over here [at] our forming table. We’re using our sausage linker for the franks… and they’ll be hung on these sticks and then they’ll be put on these racks, and then they’ll go into the oven. Our ovens vary depending on what’s going into them – now they have franks, previously it was meatloaf and they had all these little trays up. But it’s pretty much a simple process, you could actually make these at home, which is I think really great because I’m not really into highly processed foods. It’s a simply made product.

We use this wheat flour that’s had the starch rinsed out of it, and that’s our base ingredient. We get that from Red Deer, Alberta.

Sausage making isn’t top secret. But making vegetarian food, there’s this mystery that surrounds it. We’re very transparent in how we make our products, which is very important to our brand. Our audience, our consumers, they want to know how their food is made, and that’s why we give tours, that’s why we have windows. Jessica Tupper: So, where is Field Roast going next? Vegetarian pancetta?

DL: We’re taking the upper end of the category, and we are charcuterie inspired, so there’s lots of different areas that we can go into, which we haven’t explored yet. So our focus now is more product driven or market driven in terms of going into our frankfurters, going into restaurants or conventional grocery stores. We’re seeing there’s this major interest in vegetarian foods – and that people aren’t becoming vegetarian as much as they’re just eating less animals, eating less animal meat.

JT: It’s amazing how much the meat market is changing right now.

JT: What do you never expect to make in vegetarian form in terms of currently available meat products? What would you never choose to try to make?

JT: Just because bacon’s too bacony?

DL: Because we don’t make fake animal products. Potentially we could make some form of scrip, that would be salty and smoky and sweet, but it would have to have some plant based origin, it wouldn’t be fake bacon.

JT: This doesn’t feel like a bacon kind of place. And bacon is awesome. JT: In a previous interview, you mention that “food preparation has been considered domestic work and it’s undervalued.” What can we do now to make things more inclusive?

DL: One of my next projects is something I call commodity cooking, which essentially is instead of cooking recipes, we’re cooking foods, commodities, and then assembling them. And so instead of going home after work and opening up a book and getting the recipe for pad thai noodles or something, you go home and you have legumes which have been cooked, you have nuts which have been roasted, you have beans that are clean, you have quinoa, and you have some salsas or whatever that you’ve made or bought and then you can just assemble them, and it’s a great way of eating.

JT: Do you have any advice for young professionals who may not feel like they have the time or skill to cook?

DL: Listen to your body and feed your body first, instead of your emotions, and cook simply. And to use the equipment that’s available – don’t get caught up in equipment, in ingredients. I aspire to eat 80% of my calories from vegetables. This morning I had a smoothie, I had a golden beet in it, a piece of rhubarb, a piece of cucumber, a big handful of spinach, some raw almonds, some flax seed, and I just whirled it up, and it’s just a great way to begin a day.

It doesn’t have to be so complicated. I think what’s happened is that the pleasure-seeking in food has made it really complicated. And the chef culture has made cooking more difficult for people. And that has put us off the real business of “what do we need to eat to live?”

DL: Probably the franks. I like them all, because I’ve had a part in developing them or had developed them, but the frank – it’s always the latest product. And the deli slices, we just redid them and upgraded the formula.

JT: Any upcoming Field Roast events we should tell CraveLocal readers about?

DL: The thing we’re focusing on for promotion right now is our franks and Safeco Field. We just want people to know who we are and what we’re doing.