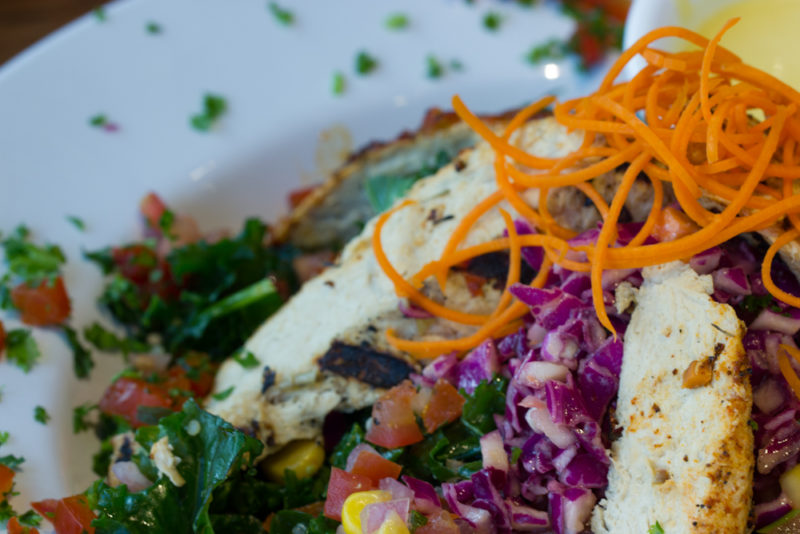 by Jessica Tupper
Growing up, I hated kale. And brussels sprouts. I don’t actually recall eating either of them; I’m betting I watched enough TV and/or listened to my friends enough to think they were bad things. Considering that I all but live on kale nowadays, I can chuckle at the memory, but it’s impressive how many people... Read More Growing up, I hated kale. And brussels sprouts. I don’t actually recall eating either of them; I’m betting I watched enough TV and/or listened to my friends enough to think they were bad things. Considering that I all but live on kale nowadays, I can chuckle at the memory, but it’s impressive how many people scoff at leafy greens. This made me really excited to check out the first Seattle location of Veggie Grill over in South Lake Union.

I admit, the pre-opening lunch was not what I was expecting. Soft openings tend to be for friends of the restaurant and some press; a test but not the full experience. When I walked up to Veggie Grill Mark, the manager, invited me in, but also pulled in passerby. (“Everything’s FREE?” was uttered more than once around me.) I got in line, a staff member gave some suggestions from the menu, and I went to place an order. The space is definitely nice. There are small tables, booths, and outside seating, all with clean lines and fancy lighting. The space has floor to ceiling windows for tons of light, mellow/natural colors, and some kind of pop music on the speakers. Without the cashier and line setup, I’d think it was an expansion of the nearby Whole Foods cafeteria. (The entree prices, all under $12, definitely keep it in casual dining pricing.) We were each given a glass, which we could fill with water, lemonade, or a selection of teas. I chose a pomegranate green tea on the cashier’s advice; it was sweet, with a hint of fruity mellowness and some bitterness. I probably would just get water next time, or blend an Arnold Palmer with the peach tea and lemonade. I didn’t experiment much because the service was ridiculously fast. I had barely finished testing my camera for the site when all the food arrived at once.

I ordered the Sweetheart Fries ($4.25), Chill Out Wings ($6.50), and the All Hail Kale salad with blackened chickin’ ($11.20; $8.45 without the chickin’). The fries were sweet potato fries, cooked expertly and topped with a savory spice blend. While good sweet potato fries are nothing new, it was a huge portion for a side, served in a bowl, and the spices were a nice touch to the usual salt as topping option.

The All Hail Kale salad is definitely an homage to my favorite leafy green, topped with thin curls of carrot and mixed with red cabbage, tomato, and corn. Whatever they tossed the kale in besides the salad dressing worked great for eating it straight; I ended up munching on leftovers while looking over my photos. The blackened chicken lended a spicy contrast and something heartier to munch on, making it feel more like a full meal.

[quote]The chickin’ is really where it gets interesting. Veggie Grill’s chickin’ looks like chicken – as in, the real thing. [/quote] When you bite into a Chill Out wing, it looks like chicken. (And goes great with the barbecue sauce.) It has a fairly similar texture and bite to ‘actual’ chicken. My roommates probably would not have been able to identify it wasn’t chicken when I brought the leftovers home. That is freakishly impressive. If you’re looking to convince your carnivore friends that vegetables can and do taste good, you’re probably going to end up here. I don’t think the chickin’ is a life-changer, but it may affect your view on vegan food.

The desserts were served as a sampler – a small cup of pudding, a half a cookie, two cubes of carrot cake with icing. I really think this would work great for a regular menu item. The cookies pieces were a bit dry for me, but I could dunk them in the bittersweet pudding. The carrot cake was great, but got too sweet for me during the second portion. Veggie Grill is in a dangerous part of town for food fans, commonly referred to as the Amazon Cafeteria.

While there really is an Amazon cafeteria, with all that being a cafeteria entails, there are simply a lot of restaurants clustered around South Lake Union that cater to the nearby tech companies.

There’s Bravehorse Tavern, with its awesome pretzels; Cactus, Portage Bay Cafe, Blue Moon Burgers, even more than a few food trucks. But most of these don’t cater to a primarily vegetarian crowd, let alone vegan, and it’s not necessarily the healthiest fare. For those of us who work in and around Amazon, it’s going to be a serious treat with kale on top.