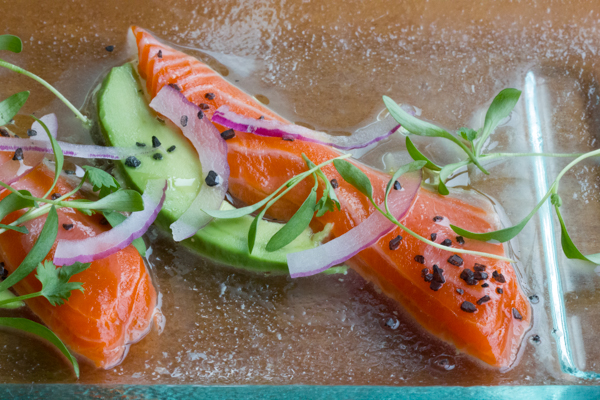 by Vik Rangraj
In case you’ve been living under a rock the last week or so, it’s Copper River king salmon season. To highlight one of our local culinary treasures, Seastar restaurant in Seattle put together a tasting menu. Tucked above the Westlake Whole Foods, Seastar is worth the climb up the stairs. Not only is the space... Read More 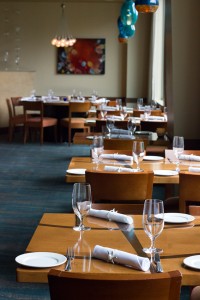 In case you’ve been living under a rock the last week or so, it’s Copper River king salmon season. To highlight one of our local culinary treasures, Seastar restaurant in Seattle put together a tasting menu.

Tucked above the Westlake Whole Foods, Seastar is worth the climb up the stairs. Not only is the space gorgeous, with jazz music playing in the background, but the staff are amazing. Our waiter, Chris, was incredibly friendly, solicitous and a true foodie. His knowledge of and passion for both Seastar’s food, and food in general was impressive.

The tasting menu ($75) was accompanied by the obligatory wine pairing ($39), which was assembled with an amazing level of craft. If the menu itself often felt out of balance, then the wines did much to restore it.

The menu was at its best when the chef had room to play and improvise. The amuse bouche, an asparagus soup with a potato-leek base and garnished with meyer lemon was fantastic. The lemon cut through the creamy soup perfectly, preventing it from being excessively monotonous. Dessert was a revelation. The cheesecake was the best I’ve had outside of New York City – and that thing on top? Campari cotton candy. The combination of sweet, dense cheesecake, tart compote, and ever so slightly bitter Campari created a glorious trifecta of deliciousness. It is the stuff dreams are made of. 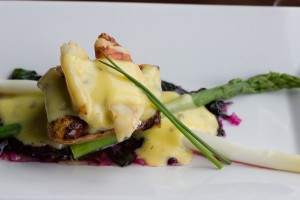 The salmon crudo was also very good. Closer to a deconstructed ceviche than anything else, the meyer lemon juice, cilantro, and red onion cleanly stripped away everything but the soul of the dish. Not only was it very refreshing, it was the only dish that was notably seasonally appropriate.

All three of the main courses were heavy, creamy affairs, but each wine pairing supplied exactly the right amount of acidity to cut through and provide much-needed bite. Most of the wines were perfectly respectable standalone beverages, but of particular note was the Verdejo which accompanied our first entrée. Upon first sip I was ready to dismiss it, but then I had it with the seared salmon on risotto and it was a transformative experience. It was a powerful reminder of why, as my editor says, a good Sommelier is worth her weight in gold. However, a good tasting menu shouldn’t require the wine pairing to succeed, and this one really does. 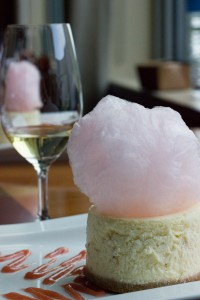 I LOVED the morel and English pea risotto that accompanied the first entrée; it was deeply satisfying, wonderfully truffley. The morels and pea vines were perfectly cooked, and as usual, proved to be two of my favorite things about spring. I really liked the next two dishes as well, but drowning diners in heavy, creamy sauces is probably not the most seasonally appropriate course of action.

A good tasting menu should do one of three things: give a clever chef room to play, place a strong focus on a particular ingredient, or show the breadth of variety a restaurant’s kitchen is capable of. When the chef had room to have fun, the food was transcendent, but that solely encompasses the amuse bouche and desert. The salmon itself regularly played second fiddle to its accompaniment, and the quick succession of heavy creamy foods caused the three main courses to blend together overshadowing their individual brilliance. That said, if nothing else, the John Howie group once again did prove that they can do decadence like few others can.

Vik Rangraj
Vikram is 'The New Guy' at Crave Local. He loves nightlife, cocktails, sports, tailgating and meat! He has a nice hat, in which he can be frequently spotted while exploring Seattle's drink culture.   If you have an upcoming event, grand opening, great product, contact us
View All Posts by Author
Visit Author Website