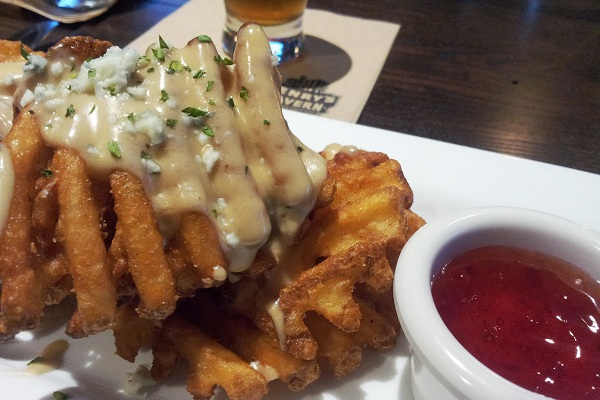 Hit the Beers, then the Game at Henry’s Tavern

by Jessica Tupper
Henry’s Tavern, across the street from Safeco Field, is a food heaven for beer and sports enthusiasts. Not only does the bar have over one hundred beers on tap, but they specially built the bar with an ice ring to rest your brew on and help keep it cool. It’s also definitely the place to... Read More Henry’s Tavern, across the street from Safeco Field, is a food heaven for beer and sports enthusiasts. Not only does the bar have over one hundred beers on tap, but they specially built the bar with an ice ring to rest your brew on and help keep it cool. It’s also definitely the place to get ready for a game, with TVs everywhere. But they also care a lot about their food, from smoking their own mozzarella to partnering with the Essential Baking Company and Macrina Bakery for fresh, local breads. Since we were so curious, the Henry’s team invited us to come and try a tasting so we could decide for ourselves if their bar was where to catch the next game. This was one of the most eclectic menus I’ve seen in a bar. We started with sushi then moved to chili, all beef and topped with cheese and crispy strips of torilla. It was ridiculously hearty but so was the comforting beer cheddar soup, laced with Tillamook cheese. We also tried their burger, a medium rare chuck patty on a toasted Macrina Bakery bun, and a bite-sized Bavarian meats sausage. Henry’s should offer this as a regular tasting menu; it’s really a great way to try everything.

The highlight of the night was the carbs. Their fried cheese curds, tossed with peppers and served with a lightly sweet pepper jelly, should be part of every happy hour from now on. And the waffle fries, in fluffy perfection, were topped with Gorgonzola crumbles for an addictively savory kick. I admit I wasn’t as excited by the orange chicken, which was heavily breaded in an Americana style rather than going for authenticity. (If you were craving Chinese-American takeout, it was the best I’ve had.) I was more a fan of the Mongolian beef, with lighter breading and a nice kick of heat.

We finished with their ice cream cake, with chocolate cake, Olympic Mountain vanilla ice cream, and covered with a thick layer of chocolate ganache. This was a dessert best shared, especially after such a hearty meal.

Henry’s has a game day menu, where you can try out most of these before hitting the field. Their menu is great for sharing, and that much better when paired with a cold beer or cider. Don’t be afraid to be adventurous, and bring friends.

Jessica Tupper
Jessica Tupper is busy, and likes it that way. As the Food Ninja, she likes to figure out new ways to explore the Seattle food scene - from eating at all the Tom Douglas restaurants in one day to epic sundaes using Bluebird and Molly Moon ice creams. Silly hats may or may not be involved. If you have an upcoming event, grand opening, great product, contact us
View All Posts by Author
Botran Reserva Rum Review and Cocktail Recipes
Previous Post
Destination Norway: Mormors Stue