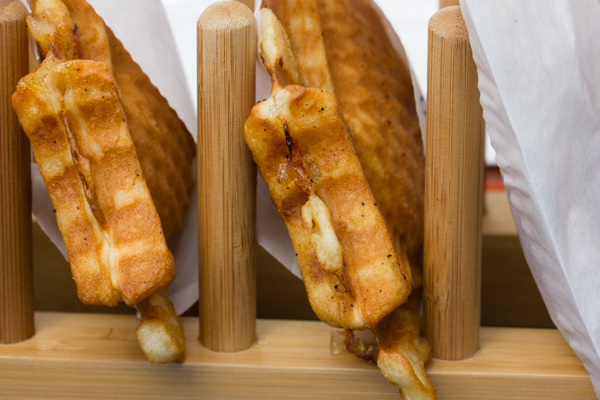 Tasting the Fish at BeanFish Taiyaki

by Jessica Tupper
Seattle is known for its sushi and fresh fish, but our Japanese street food has only been really growing recently. And now that we have BeanFish Taiyaki, I was thrilled to go try out their fish at DragonFest. Before I get started, some history. Taiyaki were originally made in Japan as street food for those... Read More Seattle is known for its sushi and fresh fish, but our Japanese street food has only been really growing recently. And now that we have BeanFish Taiyaki, I was thrilled to go try out their fish at DragonFest. Before I get started, some history. Taiyaki were originally made in Japan as street food for those who couldn’t afford sea bream, and were baked in cast iron pans and stuffed with azuki beans. Now we can get sea bream at Shiro’s, and taiyaki has grown up into proper baked good glory. It’s pretty much a fish-shaped, filled waffle, only with slightly moister and fluffier insides than most waffles I’ve encountered.

(Note: Taiyaki should never be confused with takoyaki, or baked octopus balls that are usually topped with mayo and savory shaved fish flakes.)

Back to the present. BeanFish Taiyaki is the child of Liana and Brady Woo, who are currently only selling their addictive treats at their stand, which shows up at the Fremont Sunday Market and food truck events. And it’s just a stand, which is rare in Seattle’s food truck world, but it’s a great setup for summer bites. We tried three flavors: the traditional azuki bean, grandmother’s apple pie, and cinnamon sugar, which were $2-$4 per fish. They have a growing and wonderfully eclectic lineup, from custard to peanut butter and banana, that you can get at their usual stops. The red bean, named after Ono Jiro from Jiro Dreams of Sushi, is stuffed with a lightly sweet, chunky tsubu-an style azuki bean filling that is beautiful against the fluffy taiyaki exterior. They’re so good that I ate six of them during the course of writing this review and wrote a separate post on my own blog about how tasty they were. If you haven’t been converted to eating beans in dessert yet, let this be a delicious experiment. It might look odd if you’re not used to seeing beans prepared this way, but you have to give them a try.

In complete contrast, the grandmother’s apple pie is pretty much what the McDonald’s apple pie dreams of being: the apples are lightly spiced and in perfect, tiny cubes, and the smell of cinnamon and apple hits you before you even take a bite. For those who aren’t ready for azuki beans, this is the fish for you.

And if you’re still not sold, even the cinnamon sugar is like eating a fluffy, crispy snickerdoodle. Coated with cinnamon and sugar inside and out, the taiyaki is a little challenging to eat at first bite, like nibbling carefully on a powdered sugar doughnut. Shake the fish in the bag first if you’re nervous, and that solves the problem. Best of all, if you tell or tweet them intriguing flavor ideas, you might get a taiyaki in your honor. I asked for Rainier cherries with Theo dark chocolate, so hopefully we’ll see that one in the rotation someday.

If you have a friend who can’t make it, they’re almost as good reheated in a toaster or conventional oven as getting them fresh. And don’t buy out the stand: two or three make a rather filling dessert, and they can definitely make it a full meal with their savory options. Liana said they’re hoping to hit more places besides the Fremont Sunday Market soon, so watch their site for updates.

Jessica Tupper
Jessica Tupper is busy, and likes it that way. As the Food Ninja, she likes to figure out new ways to explore the Seattle food scene - from eating at all the Tom Douglas restaurants in one day to epic sundaes using Bluebird and Molly Moon ice creams. Silly hats may or may not be involved. If you have an upcoming event, grand opening, great product, contact us
View All Posts by Author
Play with your Food at Tomato Battle Seattle
Previous Post
Travel Gear: We Road Test the HuMn2 RFID Blocking Wallet
Next Post
You May Also Like