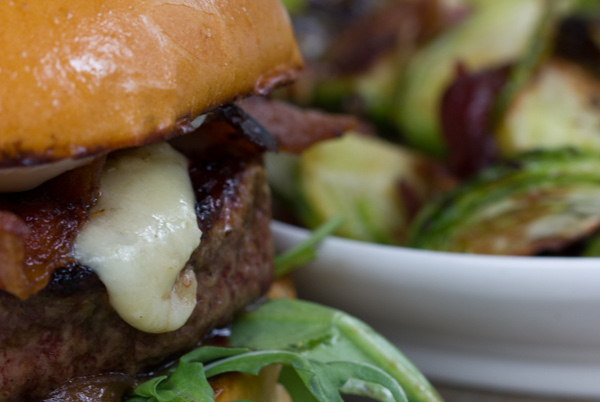 Come for the Burgers, Stay for the Milkshakes at 8 oz. Burger Bar

by Jessica Tupper
8 oz. Burger Bar is kind of a study in Capitol Hill style relaxation. It’s similar to the vintage styling at Lot No. 3, but a bit more casual, with menus that are titled ‘Food Menu’ and ‘Drinks Menu.’  There are TV screens above the bar, a vintage ice chest, and the burger of the... Read More 8 oz. Burger Bar is kind of a study in Capitol Hill style relaxation.

It’s similar to the vintage styling at Lot No. 3, but a bit more casual, with menus that are titled ‘Food Menu’ and ‘Drinks Menu.’  There are TV screens above the bar, a vintage ice chest, and the burger of the day is written in chalk in friendly letters. Smiling beasts look down from the walls, almost commending you for digging in to that burger.

A friend of mine in town from Texas came to help divide and conquer, which was essential. (I’ve been at 8 oz before, and knew I was in for a ton of food.) It’s definitely a place for meeting people, with such large portions to go around.

For ‘drinks’, we had two milkshakes – the alcoholic Vanilla Dream milkshake ($10) and the PBJ shake ($7), both made with Bluebird ice cream. The Dream, with Fremont Whiskey, was quite sweet and had a generous pour of bourbon, with the ratio mellowing out for the better as we drank. But the winner was the PBJ – it was one of the best milkshakes I’ve ever had. We then started full-tilt for food with the short rib poutine ($9).  Made with a Beecher’s cheese sauce instead of curds, it fails the Canadian standard, but it’s tasty.  It’s a more savory version than the sweeter poutine from Smith, closer to a sauce than chunks of rib. But that consistency works well against the crisp, salty fries, and for people trying to watch sports on the TV screens above the bar.

The short rib grilled cheese ($12), with onion marmalade and havarti, is a good balance of meat and salt. The cheese has that good pull I associate with the best of grilled cheeses, and you get nice hunks of meat. But it’s the same meat preparation done for the poutine, so getting both in one meal is really heavy on the short rib. Pick one and be happy.

One unusual aspect of ordering a burger here for true carnivores is you can only order your meat medium or well, not medium rare, but it’s still a good burger. I wish the brioche bun was slightly stronger in flavor, so as to be more than just a vehicle to get the meat to your mouth, but that’s a preference issue. I’d love to try the lamb and wild boar burgers next time, which sounded deliciously carnivorous, or the pretzel bun, as I love the pretzel burgers at Bravehorse. For sides we grabbed the bacon brussels sprouts and onion rings ($4 each).

The brussels sprouts were good enough for seconds – these are beautifully roasted, crispy, salty bites of semi-healthy goodness, with bacon for good measure. The bacon isn’t as good as the sprouts, but together they’re beautiful. (Yes, I said bacon wasn’t as good as a leafy vegetable. Just try them.) We were so full, we could barely appreciate the onion rings, which are fluffy, beer-battered renditions. Vik loved them, I was more entranced by the sprouts. You’re in good hands either way.

In all, it’s filling, greasy, meaty, locally sourced food, and the milkshakes are spectacular. Come for happy hour, when the food options are $2-$8, grab a couple shakes, and watch the game. You’ll be glad you did.