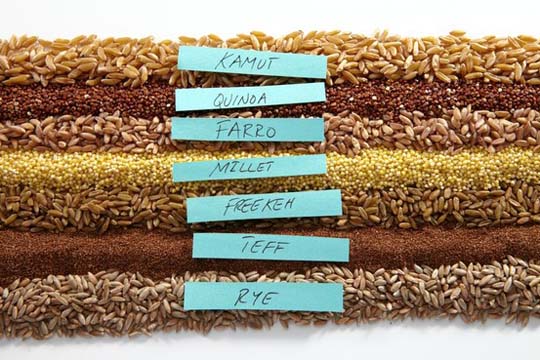 by Crave Editorial Team
Old-world grains are making a comeback. Dry foods with unpoetic names like spelt, teff and millet have long inhabited the bulk bins at health-food stores. Following on the heels of heirloom tomatoes and heritage pork, old-world grains have begun to pop up on menus at hip, ingredient-driven restaurants, too. Their reputed heart benefits and other... Read More Old-world grains are making a comeback.

Dry foods with unpoetic names like spelt, teff and millet have long inhabited the bulk bins at health-food stores. Following on the heels of heirloom tomatoes and heritage pork, old-world grains have begun to pop up on menus at hip, ingredient-driven restaurants, too. Their reputed heart benefits and other nutritional credentials are nice perks, but their nuanced flavors and rugged textures have spurred chefs to experiment with these ingredients in earnest.

Known as “ancient grains,” thanks to the advanced age of the species (a cool 5,000 years old in some cases) and because they’ve managed to evade the industrial grooming of modern crops like wheat and corn, these old-school strains have retained their unique personalities. Some are plump and creamy; others lean and laced with smoke. They’re perfect for shoring up unfilling salads and brothy soups, stuffing small birds and pork loins or standing in for rice in risottos. And because preparing these grains is no more demanding than boiling pasta or steaming rice, they’re easier to cook at home than you might think. Here’s a handy decoder to help you explore their charms.

A magic bullet for both gluten-free and vegetarian diets, this quick-cooking complete protein absorbs other flavors well. Though technically a seed, quinoa (pronounced KEEN-wah) performs like a cereal with its soft and fluffy texture. Red, black and pearl varieties are widely available and all keep their color when cooked. Kim Boyce, author of the cookbook “Good to the Grain,” likes to stir leftover cooked quinoa into multigrain pancakes laced with grated pear or add a scoop to honey cornmeal muffins for extra heft. Quinoa also makes a great substitute for bulgur in tabbouleh. $8 for 1 pound, altereco-usa.com

The word kamut is actually a trademarked name for an oversized strain of organically grown wheat that’s 99% free of any genetically modified organisms—or even modern interlopers. Its grains are sturdy, golden and twice as large as most wheats—so big, in fact, that it was pitched to the makers of CornNuts in the 1970s as a healthy version of the snack. (The company ultimately passed.) Its size makes overnight soaking a must, but also means it’s virtually impossible to overcook. The creamy, bouncy kernels bring a rustic chew to salads and chilis. $8 for 10 pounds, montanaflour.com

Teff is said to be the teeniest grain on earth: 150 times smaller than a single wheat berry. When ground into a flour, it’s used to make the Ethiopian staple injera, a spongy fermented flatbread. Cooked whole, teff makes a nutty hot cereal and will melt into stews as a flavorful, gluten-free thickening agent. Jason Bond, chef at Bondir restaurant in Cambridge, Mass., prepares teff polenta by simmering the grain with milk, salt and dried chili. He serves sautéed slices under a pile of roasted vegetables and mustard oil. $20 for 5 pounds, teffco.com

Freekeh is the name used for any wheat, usually durum, that’s harvested when still green, then fire-threshed to give it a smoky intensity and pliant pop. Perhaps the fastest up-and-comer in the ancient grain crowd, freekeh (pronounced FREE-kah) can be found in warm salads, risottos and pilafs. At Pocantico Hills, N.Y., restaurant Blue Hill at Stone Barns, chef Dan Barber makes whole-grain crackers by puréeing cooked freekeh, spreading it paper-thin and slow baking it for about 2 hours. The result is plainly delicious and shows off the grain’s grassy flavor. $8 for 14 ounces, freekehlicious.com

Though best known as a recent import from Italy, farro was cycled into rice crop rotations in the American south before the Civil War. The term farro is broadly used for wheat family members that have a nutty flavor and stout build, including emmer, spelt and einkorn. Heirloom-grain producer Anson Mills offers options on both ends of the spectrum, from farro piccolo (which cooks quickly and makes a mean risotto) to slow-roasted farro (which is hardier and has a rich, woodsy taste). $8 for 12 ounces (farro piccolo); $7 for 12 ounces (slow-roasted farro), ansonmills.com

If you find yourself thinking millet looks suspiciously like birdseed, that’s because it is. Yet humans have been eating millet for millennia; it preceded rice as the staple grain of China. It can be eaten raw or cooked. Toast it in a dry frying pan to add crunch to salads or granola, or boil it down into a thick, sandy porridge. $3 for 28 ounces, bobsredmill.com (Editor’s note: Millet is also incredible as an alternate grain in whisky, which is traditionally made with corn. We tried the Dark Millet whisky from KOVAL distillery in Chicago, and it was out of this world.)

Whole rye grains cook up like a dense, earthy cousin of wheat berries. But don’t expect rye to taste like the bread on your tuna melt. That bread gets its tangy flavor from both caraway seeds and rye flour. Here you’ll find a taste that’s close to that of a walnut. At Seattle’s Emmer & Rye, chef Seth Caswell simmers the restaurant’s namesake ingredients together, along with various aromatics to make a rustic risotto-like side. $2 for 1 pound, cporganics.com