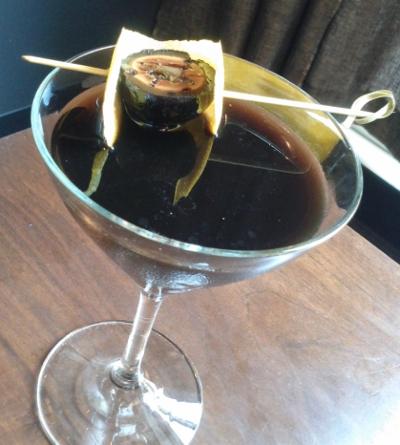 by Crave Editorial Team
It’s not the ebony color that surprises drinkers most when they order a Black Glove cocktail at Metrovino in Portland, Oregon: it’s the garnish. A preserved green walnut wrapped in a strip of orange peel straddles the glass, embodying the flavors of the cocktail—the sweetness of rum, nuttiness of nocino (a green walnut liqueur) and... Read More

It’s not the ebony color that surprises drinkers most when they order a Black Glove cocktail at Metrovino in Portland, Oregon: it’s the garnish. A preserved green walnut wrapped in a strip of orange peel straddles the glass, embodying the flavors of the cocktail—the sweetness of rum, nuttiness of nocino (a green walnut liqueur) and sharpness of bitters—in one bite. “The walnuts bring out the flavor of the nocino and add a texture like chewy candy,” said the Black Glove’s creator, Jacob Grier.

Like Mr. Grier, many bartenders around the country are looking to get more than mere decoration from garnishes. Brad Smith of Maurepas Foods in New Orleans uses a frozen speck “cigarette”—that is, a thinly sliced, rolled-up, frozen piece of cured meat—in his peach vodka-based the Pig and the Peach. “As the cured meat melts into the cocktail, the salt permeates the drink and slowly changes the flavor,” he explained. At Comme Ça, in Los Angeles, Tim Loden sought a garnish for his Choco Roco, a spin on the Brandy Alexander, that would likewise shape the overall experience of the drink. Chocolate Pop Rocks ringing the rim of the glass contribute more than sweetness: The tiny “explosions” set off when the liquor meets the carbonated candy engage the ears as well as the palate, further triggering, in drinkers of a certain vintage, a rush of nostalgia.

Some bartenders are calling on chefs to custom-make their garnishes. Michael Shetler of Las Vegas’s Sage said the pomegranate chip that accompanies his cognac, pomegranate and orange-flavored TGV cocktail came straight from their pastry kitchen. “It adds acidity, so you get tartness and sweetness. And then the chip dissolves so it becomes part of the cocktail. It’s a cool textural interaction.”

Del Pedro of Tooker Alley in Brooklyn, N.Y., is going as far as offering “extended garnishes” that break free of the cocktail glass entirely. A tiny side dish of grapefruit compote, for example, plays up the grapefruit juice in his Cherry Orchard, while a small plate of house-made apple-ginger chips complements an apple eau de vie concoction. Still, Mr. Pedro steers clear of any garnish too garish. “Don’t forget,” he said, “the drink is still the point.”

The Pig and the Peach Cocktail

Make garnish in advance: To prepare enough for several cocktails, take a few slices of speck (available at zingermans.com ), roll each into a cigarette-size cylinder and place in freezer until hardened, 3-4 hours. Make cocktail: Stir 2 ounces dark rum, 1 ounce sweet vermouth, ½ ounce Nux Alpina nocino and 1 dash Angostura bitters with ice. Strain into a chilled cocktail glass. Use a peeler to take off a strip of orange peel about ¾-inch-wide, running from top to bottom of orange. Express orange peel over drink.

Make garnish: Slice a preserved walnut (available at harvestsongventures.com ) in half lengthwise, and wrap with strip of orange peel. Secure with a cocktail skewer and place across rim of glass.

Get Your Bread Rising With the Brod & Taylor Folding Proofer
Previous Post
Potato, Parsnip and Carrot Soup Recipe From The Blue Kitchen