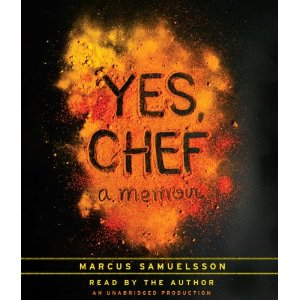 by Chef Dan
This memoir about this now world renown chef reveals a heart felt story about struggles and defeats against all odds. Born by the name of Kassahun Tsegie, Marcus Samuelsson tells an honest story about the ups and downs of his life that helped build the person he has become today. The  story begins as a... Read More This memoir about this now world renown chef reveals a heart felt story about struggles and defeats against all odds. Born by the name of Kassahun Tsegie, Marcus Samuelsson tells an honest story about the ups and downs of his life that helped build the person he has become today.

The  story begins as a young boy in Ethiopia. He is born into poverty and , at age 2,  contracted tuberculosis. His mother and sister are also unfortunate and contract the disease. Their third world town offers little hope for survival, so the three of them walk barefoot more than 75 miles in the  heat to a hospital in the capital city, Addis Ababa. Upon arrival their mother is too late and passes on leaving Marcus and his sister all alone in a big unfamiliar city. At this point both Marcus and his sister do not know the whereabouts of their father and in everyone’s eyes they have just become orphans.

A year later, after spending time in an orphanage, they are both adopted by a middle class white family in Goteburg, Sweden. This is the beginning of Marcus’ love affair with food. Marcus recounts stories about weekends with his new found grandmother and fishing trips with his adopted father on the coast. He tells us about how his grandmother taught him the proper way to clean a chicken and his first encounter with a fish smoke house. After his completion of grade school Marcus heads off to the local culinary school.

Marcus knows , immediately, that this is what he is destined to do. His purpose is to chase flavor and share it with the world. He goes on to apprentice at a nearby fine dining restaurant, excels, and begins his travels to apprentice at some of the best restaurants in the world. All of his experiences are recorded, even some that he may not be so proud of; But he wanted to be honest with the reader and tell a true story, which, indeed he did.

For those of you who still aren’t familiar with the name Marcus Samuelsson he moved on to reign as executive chef at the famous Aquavit restaurant in Manhattan. He has also been named best chef in New york city by the James Beard Foundation and in 2009 cooked the first state dinner for President Obama and company

Furthermore,  In 2010 Marcus was on Bravo’s Top Chef masters and is currently the owner and executive chef of Red Rooster Harlem focusing on Southern comfort food with a twist. combination. This book, now a souring success, adds to the many accolades he has received and you can bet to see more of him in the future.

I ,personally, was very inspired with this story and anyone in the culinary profession (or anyone for that matter) should definitely take the time to read about his travels and what it took to get where he is today.

For those unfamiliar with kitchen lingo, Yes chef is a sign of respect and affirming that you understand your place in the brigade system (A system of order created by a famous chef named Escoffier). After reading this memoir, it will become quite clear that Marcus is every bit deserving of this title and it would be an honor, at any point, to step in his kitchen and spout out the words “YES CHEF”!

Chef Dan
Dan Anderson is a classically trained sous chef, living with his beautiful wife and daughter in Sarasota, Florida. His passion for food and desire to innovate regularly leave their gourmet kitchen covered in a slurry of flour and dough, and inspired a 10 foot tall wood burning Tuscan oven in their back yard garden.   If you'd like your brand, event, or business considered for an editorial or upcoming feature, contact us
View All Posts by Author
Visit Author Website