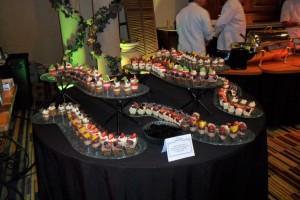 by Crave Editorial Team
This weekend, we had the pleasure and opportunity to lend a hand in supporting Taste of the Nation and Share Our Strength, here at the Orlando World Center Marriott, in Orlando, Florida. In this difficult economy, caring for others who have less is a responsibility we all must carry. Our praise and heartfelt appreciation goes... Read More

This weekend, we had the pleasure and opportunity to lend a hand in supporting Taste of the Nation and Share Our Strength, here at the Orlando World Center Marriott, in Orlando, Florida.

In this difficult economy, caring for others who have less is a responsibility we all must carry. Our praise and heartfelt appreciation goes out to organizations like the Second Harvest Food Bank, and Coalition for the Homeless of Central Florida, for all they do.

100% of ticket sales went to organizations like this, and Darden restaurant group, as well as many others, played a significant part in the makings of Taste of the Nation.

Some of the best restaurants from Disney World, Universal Orlando, and national hoteliers came together for a night of wine, incredible food, and entertainment. It was truly a food event not to be missed. There was a silent auction with gifts from Nieman Marcus, Euro Day Spa and Salon, Food Network, CNN, Regions Bank, SeaWorld, as well as a 100 bottle wine key raffle, vacations from Jet Blue, and great dinner gift certificates from local restaurants like The Ravenous Pig and more.

The menus for each station were a gastronomic delight.  Sea World Orlando’s Chef Hector Colon featured a menu of Rosemary-Vanilla Infused Sustainable Shrimp, with a Green Papaya Slaw.’One Ocean’ Shooters kept the crowd happy (made with Bacardi 151, Blue Curacao, and a dollop of sweet cream.

Let’s also not forget Orlando Brewery with their biergarten!Emeril’s Tchoup Chop, otherwise known by tourists as the ‘Chop Chop Restaurant in Orlando‘ came to the event with a simple, but elegant palate pleaser.

This simple, fresh, summer dish was a show stopper, combining sweetness from the watermelon, salty from the locally procured bacon, sour earthiness from the balsamic reduction, and a touch of bitter from the bed of arugula nested beneath.

Another show stopper for the carnivores in the crowd was Capital Grille‘s Porcini Crusted Filet Mignon with 12-year Aged Balsamic and Sam’s Mashed Potatoes. The Ravenous Pig gastropub like stylings were there with a charcuterie table of house-made cured meats, pickled vegetables, and more. James Petrakis was kind enough to take a photo with us, too!

Kevin Fonzo was there representing K Wine Bar in great form, with Tuscan Green Olives in a Lemon, Olive Oil, Red Chili Marinade, and a locally sourced shrimp & calamari pico de gallo (that did not make it to camera before being eaten!).

At the evening’s end, the true purpose of the night was about giving back, and remembering that 1 in 4 children do not have enough to eat. Audience members were given orange wristbands to hold up, and the visual spectacle made an impact with the crowd.

The winner of the Chef’s Creekstone Farms Throw-down had $5,000 donated in his name to Share Our Strength.

In the end, we said our goodbyes, downed our last sip of bubbly, and noted the event as a success, and one that we’ll definitely recommend, both for the experience, and for what Taste of the Nation stands for around the country.