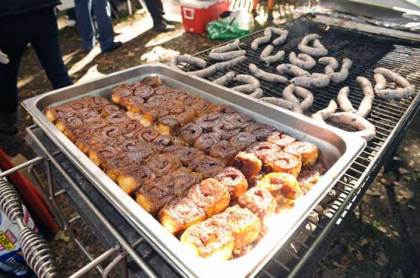 by Crave Editorial Team
Yes, summer’s coming to a close – but don’t sweat it. Food festival season has hardly begun, as the New York City’s food lovers are rejoicing for a slew of events about to take place. Here are a few events that you should definitely get your tickets to.              ... Read More

Yes, summer’s coming to a close – but don’t sweat it. Food festival season has hardly begun, as the New York City’s food lovers are rejoicing for a slew of events about to take place. Here are a few events that you should definitely get your tickets to. Pig lovers staying in town Labor Day weekend have one of the best events to choose from: Pig Island. Thrown on the Saturday of Labor Day weekend on Governors Island, the festival brings together 25 of the city’s best chefs to go “hog” wild with locally-raised pigs, along with a plethora of local brews, wines, and ciders to wash it all down with. Vegetarians can skip this one. On Sept. 8, Randalls Island will host Meatopia. Food personality Josh Ozersky hauls in chefs from all over the world to cook up meat in various ways. The menu includes everything from Cypriot Pork Gyros to Pizza with Piedmontese Beef Carpaccio. The $140 ticket here will get you unlimited food and drink. You already know we love food trucks. On September 15th, Governors Island hosts another great event, the 8th Annual Vendy Awards. Street food vendors from all over New York City will be competing to not only win the ultimate Vendy Award, but also the hearts of new fans. $95 General Admission tickets are still available, with all proceeds going to the Street Vendor Project. As you may have guessed, we’ll be covering all the action. The mother of all New York City food festivals is the New York City Wine and Food Festival thrown by The Food Network. Every personality they have will be walking around the Meatpacking District for four days, throwing demos and events for anything a foodie would desire. The biggest bang for your buck most likely is for the $195 Grand Tasting–each ticket allows six hours of eating and drinking along a pier on the Hudson.

Foodies who still like to imbibe in good brews should check out Village Voice’s Brooklyn Pour. This annual event, the sister event to the spring’s Choice Eats and thrown in the former Williamsburg Savings Bank, has the best local brews, with a few choice eats of its own on the side. Tickets are scheduled to go on sale on August 22nd, with VIP ones a relative steal at $65.