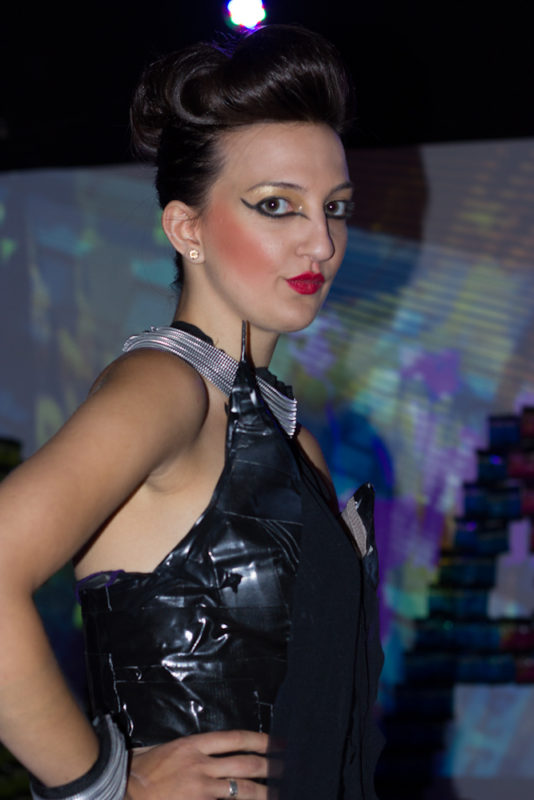 by Jessica Tupper
Held at The Social and supporting the non-profit People of Poetry (POP), the goal of the Come Alive Tour was to inspire people to dream. In a sea of color and music, the Come Alive Tour was a set of performances, covering fashion, music, and art. Held at The Social in the Capitol Hill area of Seattle and supporting the non-profit People of Poetry (POP), the goal of the event was to inspire people to dream. While I don’t know if I was inspired to dream, I was definitely inspired to think about what my dreams are.

When I walked in, the room was just beginning to get filled. Two models were standing in place or on boxes, decked out in Rene Ropas dresses made of gorilla tape, plastic, glow sticks, tulle, and bottles of Neuro energy drink. A third model took over the stage area, towering over everyone in a white gown bedecked in glowing neon tubes. Her attire was interactive – she held a mass of pens and encouraged us to write our dreams on the outfit. (I’m pretty sure someone wrote about baking amazing cupcakes – kudos.)

The rest of the room was black and stark, with delicate trays of neon pink and blue cupcakes set around contrasting sleek white sofas on the edges of the space. A massage therapist was in a corner near the stage, offering free massages to anyone willing to be contorted in public. You could even get your picture taken in one corner while others milled about. Images of people were projected on multiple screens with “DREAM” written in Pop Chips bags along one wall. As the night went on, the bar on the opposite end from the stage got packed. Ladies in high heels and men in dress shirts and jeans chatted while a set of DJs worked near the ceiling. It felt like a party for being seen at.

Once the crowd gathered, the performances began. Slam poetry artist Yashi Brown was streamed in via a Google+ hangout, thanking everyone and speaking of dreams. Massive Monkees, Seattle’s b-boy champions, danced with such grace and agility that I was frustrated I was sitting down with a sore leg. After a brief interlude, the second fashion portion of the night began with DeLon and a team of models in more Rene Ropas attire. The outfits were functional but eclectic, with styling  – and mohawks – to match.

I ducked out of the party before DeLon went on for his next mini-performance, talking of turning the place into a dance party. I’m one of those weird people who can no longer stay awake until midnight, but I did leave feeling excited for the Seattle fashion scene.

They’re hitting up Portland on Saturday and moving their way down the West Coast. If you like to dance, enjoy rap/spoken word, and really like high energy events, grab a ticket before they sell out.