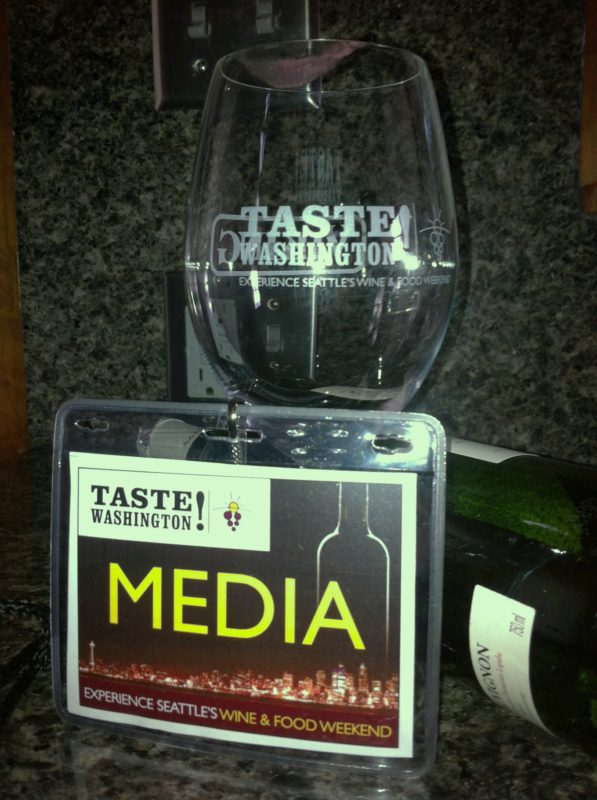 Tasting the Sights of Taste Washington!

by Jessica Tupper
Imagine being thrown into a space where someone tells you that you can try whatever food and drink you want, but you only get six hours to do so. (Or in my case, your boss wants you to not just get stuck in the corner with the desserts.) And, while you’re trying to figure out... Read More

Imagine being thrown into a space where someone tells you that you can try whatever food and drink you want, but you only get six hours to do so. (Or in my case, your boss wants you to not just get stuck in the corner with the desserts.) And, while you’re trying to figure out where you even want to go, there are tons of other people doing the exact same thing. And there are seminars. Non-food vendors. Famous chefs and sommeliers. And so many simply amazing things. So you wander around, trying to soak it all in, but you still realize you’re barely going to scratch the surface.

That’s what it’s like to only get one day at Taste! Washington. I highly recommend going both days, with a not-at-all confidential request that it needs to really be a three day event. Or a summer camp experience. (Why not? Tom Douglas already has a summer camp – make a wine version.) Still, the early entry time with the VIP badge definitely made a huge difference. As the day wore on, the place was swamped.

I’m going to be honest: I’m not a wine aficionado. I’m a food blogger. But I still had a blast, and would tell my friends to go.

Upon entry, I was given the commemorative wine glass and a plastic tray for bites. The team also gave us a gift bag, a QFC 6-pack wine bottle bag, and a PR report on the event. That bag came amazingly in handy for holding a bottle of water as I sipped wine and nibbled on cupcakes.

The wine, I admit, was a blur. I’m pretty sure I sampled 60-80 vendors, from a Gilbert Cellars rosé that made me think happy thoughts with its lightness, to Cranberry Road Winery’s sweet and rich cranberry wine. (I wish I had found Hoodsport Winery to properly compare cranberry wines.) I learned really fast I’m not the best at sampling the tannic headiness of cabernets, and I should probably stick to sweeter wines for much, much longer. I took notes, and I still felt lost just trying to learn what wines worked for me. But everyone was really sweet when I explained my lack of expertise, and offered advice and wines to match.

The food, that which I know well, was all amazing. From Sweet Iron Waffles, who brought adorable palm-sized waffles with blueberry compote, to Taverna Maza’s lamb with caramelized onions and feta, to Street Treats’ carrot cake cookie sandwiches. I ended up with a tray so full of food I had to take breaks to remember to eat it all.

When I walked over to the Dahlia Lounge booth, I found out that my day of eating at all the Tom Douglas restaurants was still a popular point of discussion. They sent me over to the seminar area, where Tom was recreating their sample dish – lamb with preserved lemon aioli. Lamb was being tossed about, cookbooks were given away, and then Tom got caught by the Nico Nico^2 team for a surprise interview.

I joined up with Ann, aka @Seattle_Maven for a quick twitter meetup, and we found Charles, the Pike Street Brewery man, with a charming beer dispensary backpack complete with cups. Then I wandered to the KIRO booth, where Tom Douglas and Theirry Rautureau were talking up their radio show/podcast, which somehow ended up with a group shot of all three of us with me wearing a coconut cream pie bite on my head.

From running into BOKA’s Mi Suk Ahn, to meeting Kim and Kendall of the Seattle Beer Blog, to the cheeses and cabernets and rieslings, it was an amazing experience. My hands were lightly stained red when I left, and I was exhausted, but excited.

Jessica Tupper
Jessica Tupper is busy, and likes it that way. As the Food Ninja, she likes to figure out new ways to explore the Seattle food scene - from eating at all the Tom Douglas restaurants in one day to epic sundaes using Bluebird and Molly Moon ice creams. Silly hats may or may not be involved. If you have an upcoming event, grand opening, great product, contact us
View All Posts by Author
Skinny Cocktails and Gluten Free Options for Summer Menus
Previous Post
WSWA 69th Annual Wine and Spirits Expo Las Vegas – A Huge Success with Record Attendance